Now that the parade is back and a Genie+ option, I was curious if anyone has viewed the parade from wherever the G+ viewing location is and what they thought about the experience. I haven’t seen anything on any of the blogs about it and since I’m going to MK in May just to watch my brother’s band march in the parade, I’m optimizing for the parade!

When I wanted the “classic” experience without the sun, I picked a spot in the shade on the west side of Main St, and got there early. It let me see the parade with the other stores as a backdrop.

AllEars did a YouTube video about a week ago on “Best Day Ever Magic Kingdom” and Molly did parade viewing with Genie+. The viewing area is closer to the castle on one side of the hub it looked like. Not the flagpole area that the dining package was in (hoping that comes back soon!).

I like watching from Frontierland. You don’t have to get there that early and it’s first so it will be don 15 minutes after parade start.

AllEars did a YouTube video about a week ago on “Best Day Ever Magic Kingdom” and Molly did parade viewing with Genie+.

Perfect! For others, the video is here: The PERFECT Day in Magic Kingdom - YouTube

And the parade is around the 30 min mark.

I created an image to show where I think the area is in case anyone is curious.

The black area is the G+ location. The blue area is where my brother recommended watching the parade. The yellow is what another band director recommended.

He also sent me this picture taken across the street from Casey’s corner, which looks great. 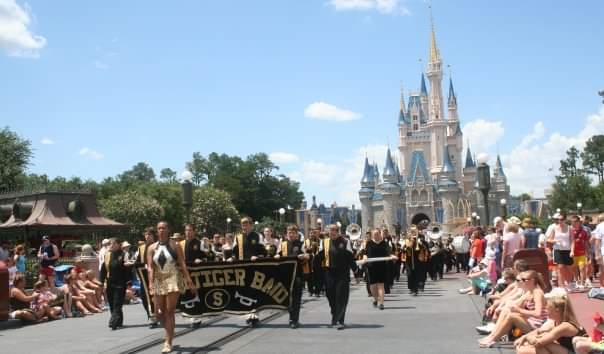 Not the flagpole area that the dining package was in (hoping that comes back soon!).

I’m hoping that comes back soon too as it would be perfect for band pictures!

It’s a little harder to pick a spot as I would like to get a picture of the band face-on with a nice background (preferably castle) versus a side view.

That photo does have a great view of band and castle. Thanks for the map with good explanations.

My touringplans plan for MK in May has both LL and ILL listed for the parade. I can’t imagine they would be the same spot. Anyone know? Seems relevant to this thread.

The parade would only be a Genie+ LL, not the paid ILL kind. Currently, MK only has one paid ILL, and it’s for Seven Dwarfs Mine Train.