What is Genie+/LL? That’s a whole topic unto itself, and @Jeff_AZ has done a great job gathering everything you ever wanted to know about Genie+/LL.

What is a Genie+/LL Daily Drop?: A drop is a specific time during each day where Disney adds more return times to the LL availability. These drops usually add return times earlier in the day than what was there before the drop. For example, at the first drop of the day for DHS, SDD may show return times of 7:00 PM or later, or even be completely out of return times for the day. After that first 9:31 AM drop, you’ll typically see return times from 11:00 AM to 12:00 PM. The drops usually get picked up pretty quickly (within minutes), so it’s best to grab one right away if you are able to.

How did you find these? For those who don’t know, with the old FP+ system, WDW used to drop FPs for major attractions at specific times throughout the day for same-day FPs. A couple of weeks ago, I wondered if those drops were still utilized with Genie+. After a lot of testing, I’ve found that there is a somewhat consistent pattern in at least 3 of the 4 parks where Disney drops additional return times. I’ve also been following along on chat, where other liners are trying different drop times to find patterns. I’m keeping a spreadsheet and hope to add even more data here soon, such as which attractions tend to get drops most frequently and when, etc, and see if there are other drop times that we’re not noticing yet. If anyone finds anything of interest in their own usage/testing, add it to the thread and I’ll update this post accordingly.

Do ILL attractions get drops? Other than FoP I have not seen an ILL attraction consistently get a drop. I did see RotR get it once, and another liner on chat has reported seeing a drop for 7DMT, but I haven’t found any consistency in the drops for ILL.

When do these drops occur? The drops tend to occur at the first minute to two past the half-hour (so 10:01/10:02, or 11:31/11:32, etc). They show up sometime in that two minute timeframe. The return times are generally within the next hour to two hours, and they go quickly - usually gone between 1 and 5 minutes, depending on demand.

How do I find these drops?. When trying to get a LL reservation from a drop, it’s best to go to the tip board shortly before the drop time, and start refreshing like mad until the drops happen. Then book as soon as you see a return time pop up.

Do these drops always happen?. Not always, but most of the time. One thing I noticed is that on a very low attendance day, or if an attraction has had a lot of downtime throughout the day, sometimes a drop will be skipped. So none of this is guaranteed, just a tool that other liners had observed with FP+ and now confirmed to be the case for LL.

So tell me already! What are the current drop-times?. Ok, here you go. Just keep in mind that Disney does change things frequently, and so there are no guarantees here, but I’ll try to keep it up to date as best as I can.

*AK does have other drops, but I’m still trying to find the pattern there.
+MK also has drops, but no pattern has been found yet.

SDD & TOT went from being not available to times starting in the 4 o’clock area available, but were gone in 1-2 minutes.

RNRC went from availability after the 7 o’clock hour back to the 4 o’clock range and lasted at least 5 minutes.

MFSR did not drop new availability at that time.

I checked this same drop time today and MFSR did show up but not until 7:00.

Did you see the other rides being available today at that time too?

I didn’t mention TSM because availability stayed there very long. But in any case, it also dropped 3+ hours earlier than what the previous times were.

I’m second guessing my AK times. I wrote down 10 but I am going to reverify tomorrow.

Epcot and DHS I’m confident in.

It definitely varies. I saw some of those pop up at the earlier times today, but later it was primarily SDD and MFSR…

Thanks so much for your observations and time spent testing!

It sure would be nice to have some attraction consistency so we can then have a solid plan leading up to those times and feel confident of what can be snatched.

I’m hoping to be able to do that over time. I also saw what I think are MK drops but haven’t figured out yet if it was a consistent time.

Really weird… I logged in to check for a 1:01 PM drop and saw that FoP had already been refreshed (12:48 or so)… I had checked at noon and didn’t see any refresh…

I’m going to remove the times I haven’t confirmed today, and continue testing throughout the day/week to try to figure out AK.

Updated the OP to make it more organized.

Thanks! I’ll add a link here from the main Genie thread. 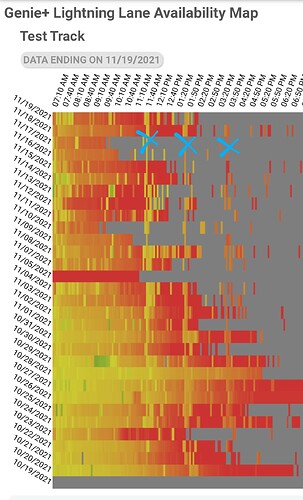