Hi!
I am planning our fourth WDW trip. This time in August so we can hit water parks. I have stayed at Wilderness Lodge which I loved, all-star music which I did not and Art of Animation suite which had a great room but I hate Disney buses. This time we are driving so we’ll have a car so we don’t have to rely on buses but I just can’t decide on a hotel to book already. My kids are 9 and 12 and I plan on taking a hotel day or two for sleeping in and playing onsite or just anywhere without park lines! Here’s what I see are the pluses and minuses of the three title choices: Cabins have horseback riding, chip and dale snores campfire with a real outdoor movie theater, on Magic kingdom boat, character dinner, we are outdoors family so love the idea of being outside and in the woods a lot, there’s an arcade for my son and we can see fireworks and the water pageant. But it’s also gonna be August: do we want to be spending a lot of time outside riding horses and shooting bows and arrows. Swimming of course, or maybe even lake activities but anything else will we really be able to enjoy it in the heat?
Polynesian: on the monorail for both Epcot and MK, can see the fireworks and water pageant, character breakfast with harder to find characters, better pool than cabins. Cons: no arcade, I’ve read a crowded pool and not as many activities on site or nearby as the cabins and beach club. Also most expensive.
Beach club: amazing pool, nearby putt putt, arcade, character breakfast, boat to DHS and Epcot. Cons: more expensive than the cabins, not as close to MK where I plan to visit three times (morning, night and full day) as we do this park on arrival and departure day in a few hour chunks since it’s open later and EMH mornings more often. And we can’t see fireworks and the water pageant.
Where will we have the best eperience?
Thanks!
Jenny

I love BC/YC (I prefer YC since I like a guaranteed balcony) but if crowds at the pool are a concern I would not stay away from these resorts. I have stayed there multiple times and I have always struggled on a hot day to find a chair by the pool.

If you want a nice pool and resort activities is there a reason AKL is not on your list?

My daughter has stayed there with her father and its farther away from the magic kingdom are really the only two reasons I got. Is it better than beach club? I could totally add another hotel into my lack of decision making! ;-). Also did you have a Savannah view and was it worth it? Did you do the safari tour from there as well? I guess they also don’t have a character meal but that’s not really a deal breaker. And I was thinking on our rest days I’d rather not commute to other hotels so much as it just seems more relaxing to not have to deal with transportation. Thanks for your reply!

If you are sticking with your first three choices I would say stick with the Cabins. FW has a lot of activities. Here is the January activity calendar for AKL http://www.themouseforless.com/tripplanning/resorts/wdw/pdf/AKLCalendar.pdf

I just think AKL has two nice pools that are not as crowded as BC or Poly. If the boat is your preferred transportation then FW is great. I think that AKL buses are better than BC. The BC pool is like a water park- if it is not very crowded (and I would say it is always more crowded than Poly).

I never pay for a Savannah view. I use the TP fax request and pick a standard room with a partial view. Here are some picture of that view: 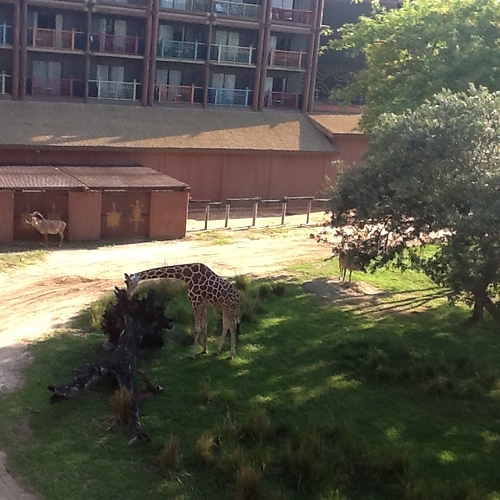 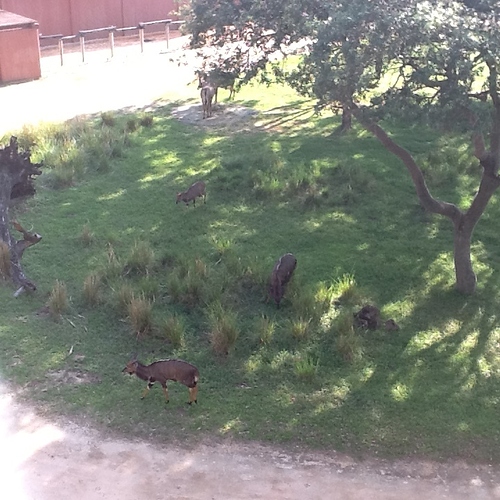 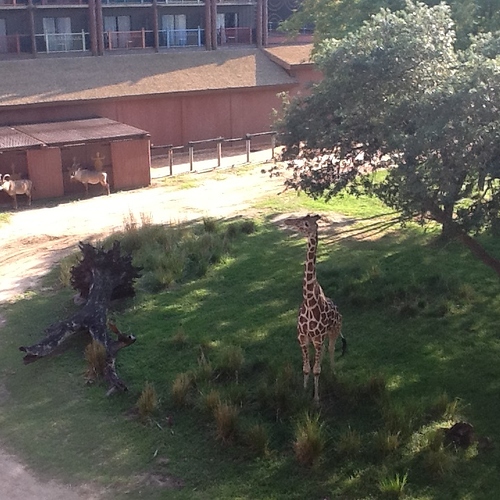 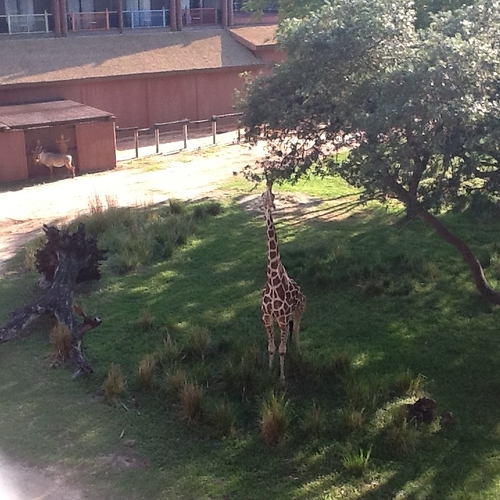 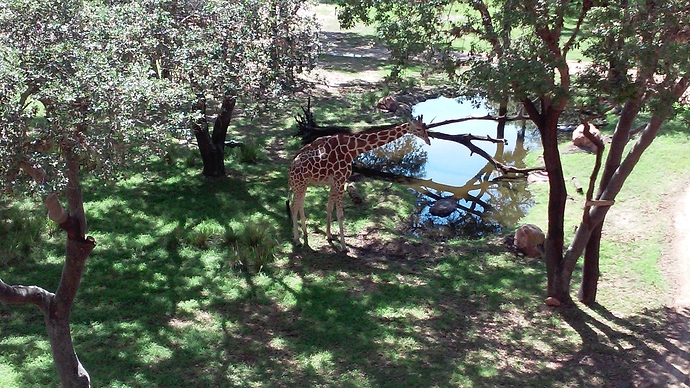 Those are some cool pics. Thank you so much for your help. It’s very appreciated. The cabins do seem very much like us. We are a hiking, outdoor loving, mountain biking family! And we live in Texas so we are used to 100 degree Summer’s like literally 100 days straight of over 100 degrees!

In August it will be hotter than the surface of the sun for much of the day so my priority would be having a great pool. To that end, I’d either pick BC/YC (my personal fave) or Poly, or consider AKL. Benefit of YC/BC is that it’s like a water park EVERY DAY. It’s really THAT awesome. Poly’s new pool looks fun, AKL pools reputedly great, especially Kidani.
We went last August/September and had grand plans to explore Boardwalk, play mini golf, go to DS, etc etc… but so scorching from 11-5 that we mimicked alligators and slinked around the (amazing, mind-blowing YC/BC) pool for at least 2-3 hours every afternoon (note that we are outdoorsy types also but in the chilly Canadian north, so more prone to melting when it gets too hot out) Also, if you CAN get yourselves moving, YC/BC is a short walk to Fantasia Gardens mini-golf, and the stroll into Epcot for Agent P and supper nice for parents and tween kids.

Did you find the pool crowded? How do you find chairs?

Chairs - we’re not sit-on-chairs-in-the-sun people, so we always just dumped all our stuff on one lounger, only rarely did we get a “poolside” one but we didn’t really care.

Crowds - I don’t like being in close quarters in pools - I almost always head for the “quiet” pool at any given resort - but I found Stormalong Bay unexpectedly tolerable. We spent a lot of time in the shallow sand-bar pool, which was the busiest because of all the little kids (including mine), but it’s huge and winding so didn’t seem overwhelming. At it’s busiest you might have to wait for a floaty for the lazy river and for 10 people to go down the waterslide ahead of you (which was amazing at night, btw). There are several parts of Stormalong Bay that are the size of “quiet pools” that were lovely and quite and beautiful where I would paddle around contentedly with maybe only 2 or 3 other people swimming there, if even.

I have stayed at BC/YC multiple times (usually April but also May and June). I have been able to find a chair to dump my stuff on one time- one. Hundreds and hundreds of chairs all have towels and other “stuff” on it . I know others manage it all the time- as a family with history of skin cancer I do not sit on a chair or even spend a lot of time in the pool, but honestly I have been in SAB once. I do not know why it is such a frustration and challenge for me.

I was thinking the same thing about mostly wanting to either be in the water or indoors like an arcade until twilight then maybe golf, fireworks movies outdoors etc. we go every three years so maybe we go in spring or fall next time and stay at the cabins and this time do storm along bay. I’ll be swimming with the kiddos as well so we won’t be spending much time in chairs. But it sounds like most of y’all prefer beach club to Polynesian. Thank you so much all!

We are Cabin people, enjoying the space and lack of hotel feel. You can walk around, swim, fish, bike. Park right at the door if you drive (we don’t). Spring and fall are really nice. Halloween is very special at the Cabins, but book well in advance. Spring we enjoyed all the wildlife, birds, etc.

Yes, it sounds amazing in all of those respects. I really like the idea of really being in nature and away from parks and crowds on our rest days. This is a tough choice for me, hence the forum!

No matter the choice it will be Disney and wonderful. Sometimes I want to try other places, even go so far as to book. But we have a special needs child so so far we have always come back to the Cabins.

To be honest, when we see chairs that are just sitting with a single towel obviously trying to reserve the spot but with no “stuff” (flip flops, anything), we’d often just toss the towel into the towel return and put our stuff down. We’ve seen CMs going around doing the same thing.

Well that makes sense and helps me!