Hello everyone. I am planning my families first trip ever to Hollywood Studios and I was hoping that I could get some help with my Touring Plan. I have often heard HS called a half day park but I sure can’t seem to fit everything in one day. I am planning on taking my family(two DD’s ages 3 and 5) to the Star Wars Galactic dessert party and I could not figure out how to put it into our plan so I scheduled “Launch Bay” for last thing before Galactic which starts at 7:00pm. I have a Chewbacca Meet on my touring plan but I am curious if I will be able to meet him at the Galactic Dessert party which would allow me to remove that from my plan. It seems like we might have too much on the plan. I am the only star wars fan in our group so if I cut anything it will be star wars stuff(Ive already cut BB-8 which I think the kids might like). Will I be able to knock out a lot of the star wars stuff at that dessert party?

Also, I have an 8am reservation for H&V but I think we are going to cancel it. We are going to MNSSHP the night before so I am not sure we will be able to make that early of a res. It will also be the last day of an 8 night trip which will also make it a late morning. I hope to make it pre RD but I am expecting us to be dragging that morning.

Is there anything I am missing? I know I am missing fantasmic but I can’t do it and the dessert party and I really want to do the dessert party. Any other must do’s?m s this plan too ambitious? Can we do 50’s diner in 60 minutes? Any tips or tricks to share? Any must eats in this park? Thanks a ton in advance. 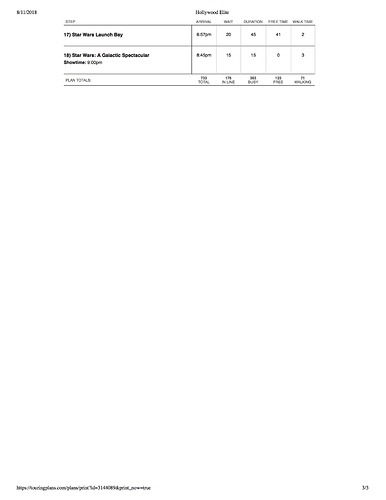 When are you going? We were able to meet Chewie, Kylo Ren, BB-8, Boba Fett, and also shop in about 30 min today.

There’s 123 minutes free in your plan right now, so you have plenty of time to do more things.

I would say that a day that is 8 am to fireworks would be a very long day, but it could because I’m on day 4 of our trip (which I planned!) and did HS from 7:54 to 3 pm today, then took a 90 min nap this afternoon.

You will most likely not be able to do 50s Prime Time in 60 minutes. I’d schedule 90 minutes just in case.

We are going in early-mid September. Where were you able to meet so many characters in 30 minutes? Was that at the Dessert party?

When we went in May, we saw all 3 characters in Launch Bay within 30 minutes. We got over there after rope dropping at 9am Sorcerer Mickey and Minnie. The lines are usually short in the morning, especially before 10/10:30am.

I don’t think the Swirling saucers or TSM will have those kind of wait times at that time of day.

We are going in early-mid September. Where were you able to meet so many characters in 30 minutes? Was that at the Dessert party?

All the Star Wars characters are located VERY close to one another in Launch Bay. We went yesterday around 12:20. Boba Fett was unscheduled, but there and taking pictures so we waited for him.

All of them had a 15 min wait posted but our actual wait was either 0 or less than 5 min.

Okay, I’ll admit the Character meet and greets aren’t our cup of tea. Can’t understand why people want to spend time to meet unknown actors all dressed up.

You aren’t meeting Chewbacca. You’re meeting some guy dressed up like Chewbacca! (Okay. Admittedly, we took our DS6 to see Chewbacca. It was a spontaneous decision, and ultimately my DS6 only agreed to it because he thought Chewbacca might know where he could buy a red lightsaber…which we didn’t find out until he got up to talk to him.)

Well, that’s just us. Anyhow, I do see that you don’t have Rockin’ Roller Coaster in your plan. Second best coaster in all of Disney!

I do see that you don’t have Rockin’ Roller Coaster in your plan. Second best coaster in all of Disney!

Ugh, I know! Unfortunately my DD3 and my DD5 are both too short to do it, I think(DD5 might be close, I havent measured her in awhile). And DW isn’t really into roller coasters, so I will have to wait until my DD’s are big enough to be my roller coaster buddies. Hopefully I can find a single FPP as a 4th FPP for me to ride it, we will see.

Okay. Just wanted to make sure it was left off intentionally. It really isn’t a ride for the youngin’s.

What, what @ryan1? 2nd best, it’s the best haha! @McMillan- if you’re staying til end of night @HS, you should be able to ride w/o really any wait.

Disney posts like 1 hour wait, keeps the entire line “stacked” outside of queue, but in fact almost (if not actually) a walk on. There’s also a single rider line at RnR but for some reason it doesn’t work as well on that ride as on some others.

BTW, this “stacking” trick doesn’t seem to be working as well for SDD or FOP (at least not yet).

No. Expedition Everest is the best. In fact, EE makes into the top 100 coasters lists. RnRC does not.

Expedition Everest is the best

that Space Mountain is the best

Space Mountain is fun. Expedition Everest is funner. Not to mention genius. How they managed to get a roller coaster enthusiast like myself (and others) to rank such a coaster so high while at the same time making it accessible to a 6-year-old is amazing.

RnRC is fun, as well, although when they redid the theming in it not too long ago, it made it a little more vanilla. There are other places with rides almost identical to it, though, including Flight of Fear at King’s Island.

There’s a single rider line for RRNC! Easier than a 4th fastpass.

I think every thing before lunch will work with no problems. You’ll breeze through those star war meet n greets if it’s anything like it was when we were there a week ago Saturday. Of course we were there at 8, not 9, but I still think you’ll do well.
My worry would be that Alien Saucers and Toy Story Mania will take longer than what your plan says. But I could be wrong and the app could have it right. Maybe others will chime in with their opinions. Sounds like a fun day! No interest in Woody/Jessie or Buzz? Honestly if not, that’s probably a good thing as it will make your plan a lot easier.

I agree with DisneyDadBen - when we were there last Sat, Alien Saucers and Midway Mania were between 25-40 min in the morning and higher in the afternoon when a lot of people went to those rides when Slinky shut down in the rain.

Yea Im not sure why the plan has me going there in the middle of the day. We are definitely going to try and RD Toy Story Mania. Thanks for pointing that out. We actually have 8:00 H&V Reservations but Im not sure we will be able to get up that early after MNSSHP and I am not sure how much of an advantage that will be for beating the RD crowd to Toy Story Mania…

Yes, RnRC does have a single rider line.