Family of the Day at MK

If you get to be family of the day, what all happens actually? And do they take a pic for you of the opening show? Just wondering.

I know @MDU did this, all well as some other liners. Hope they stop by to fill you in on the details!

@felesh was FotD also.
For us, we were the first people in line for RD. At about 7:20am (8am emh day) a CM randomly walked up and pulled my husband out of line, saying she has to speak to him. They came back and walked us to the train station where all the characters and performers were. We got to take tons of photos with them, participate in the show, ride up MS in the fire truck and were given any time paper fP’s. I have pictures on my phone but they are too large to post here. Lots of them if you scroll through Instagram.com/heatherpero

Thanks for the heads up! You should be able to post the pics now. They raised the size to 8mb last night.

We were fotd on my dd’s 4th birthday. I have to admit that I was trying

. Some say that takes away from the magic, but it didn’t for us.
We arrived a little later than I wanted. 8 for a 9 opening. We were the second family to the right rope. We were eating our breakfast at the rope and chatting with the CM. I told her it was dd’s birthday and asked where to get a birthday button for her. I got the buttons. I had noticed a manager type CM walking around and she spoke to us a little bit, but not much. Around 8:30, I had basically given up and told dh that I was going to go take some pics of the birthday girl. 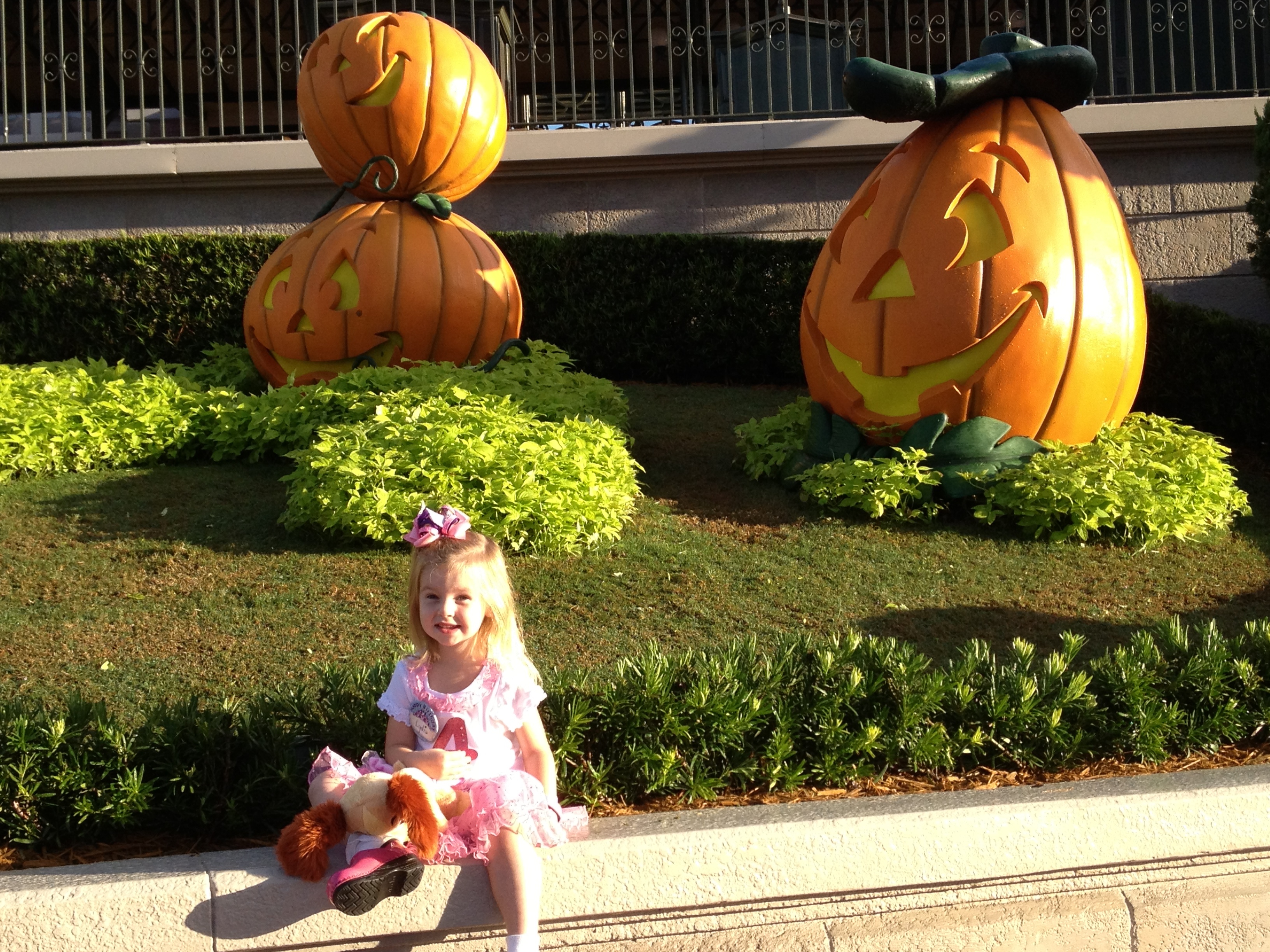 While taking these pictures, dh and the manager CM walked by and dh frantically told me to follow them. Evidently, she just walked up to him and asked him to follow her. We were seated on a bench beside the rope on the left side and asked to wait. After a few minutes, Barbara came out. She was an energtic lady that took us to the fire engine and told us that it was her job to make our day special. She took several pictures, drove us around the loop and took more pictures. 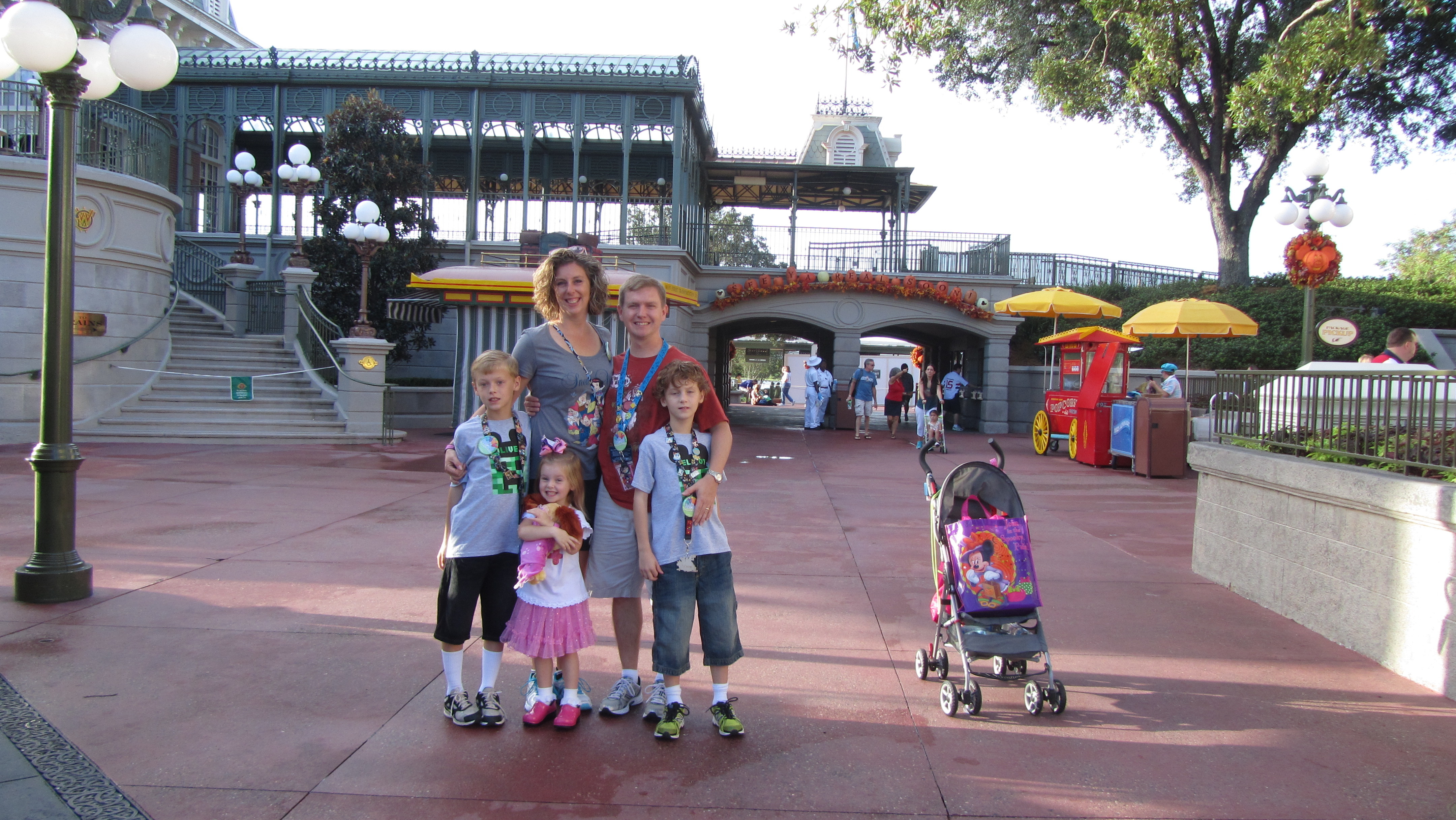 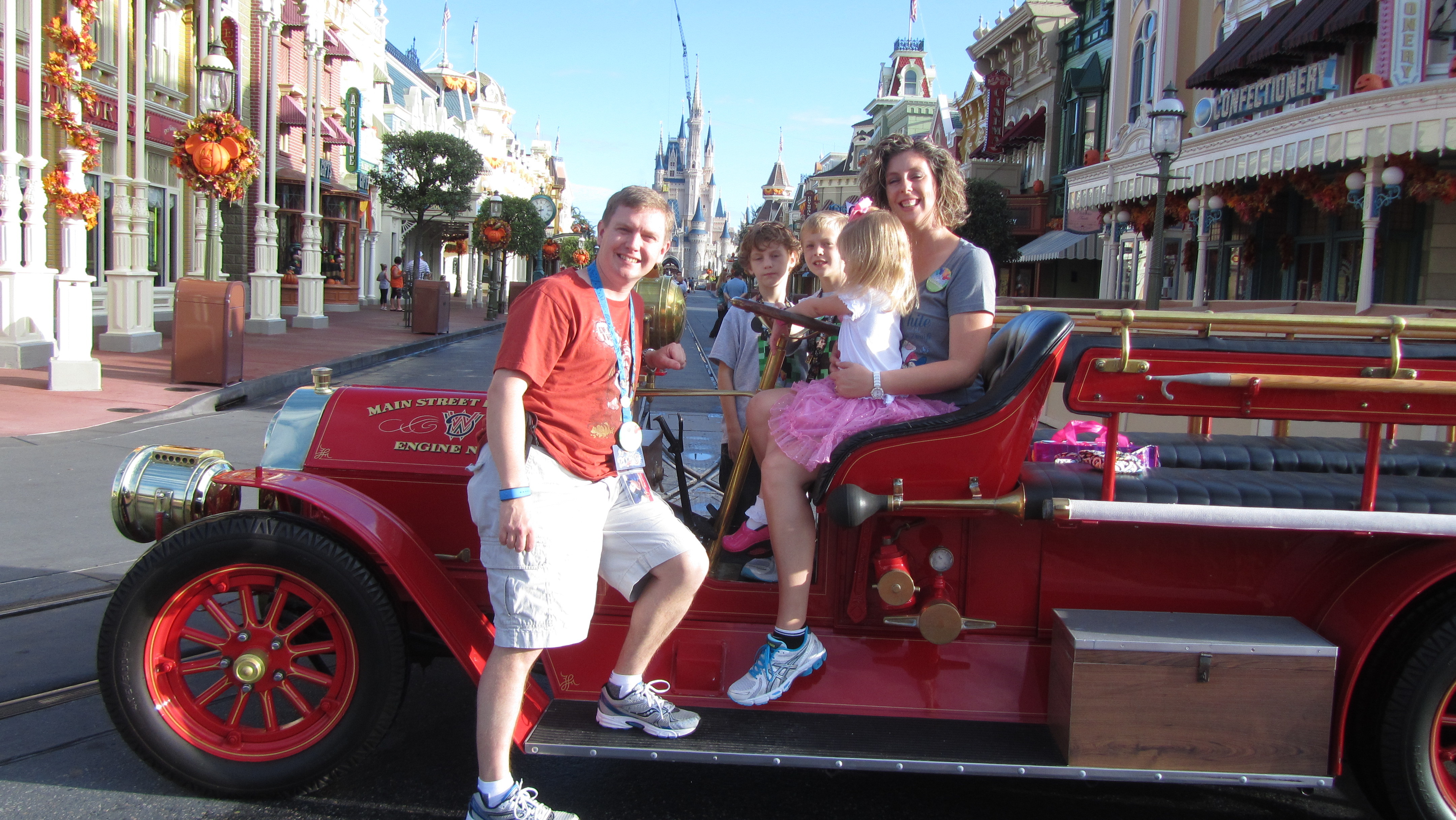 We then rode to the entrance of the train station and Chief Smokey came over to greet us. He informed us that we were indeed family of the day and he needed help opening the park. He told us that this was the first day the train had been down for refurbishment and we would do a shortened version and to bare with them as they were figuring it all out. 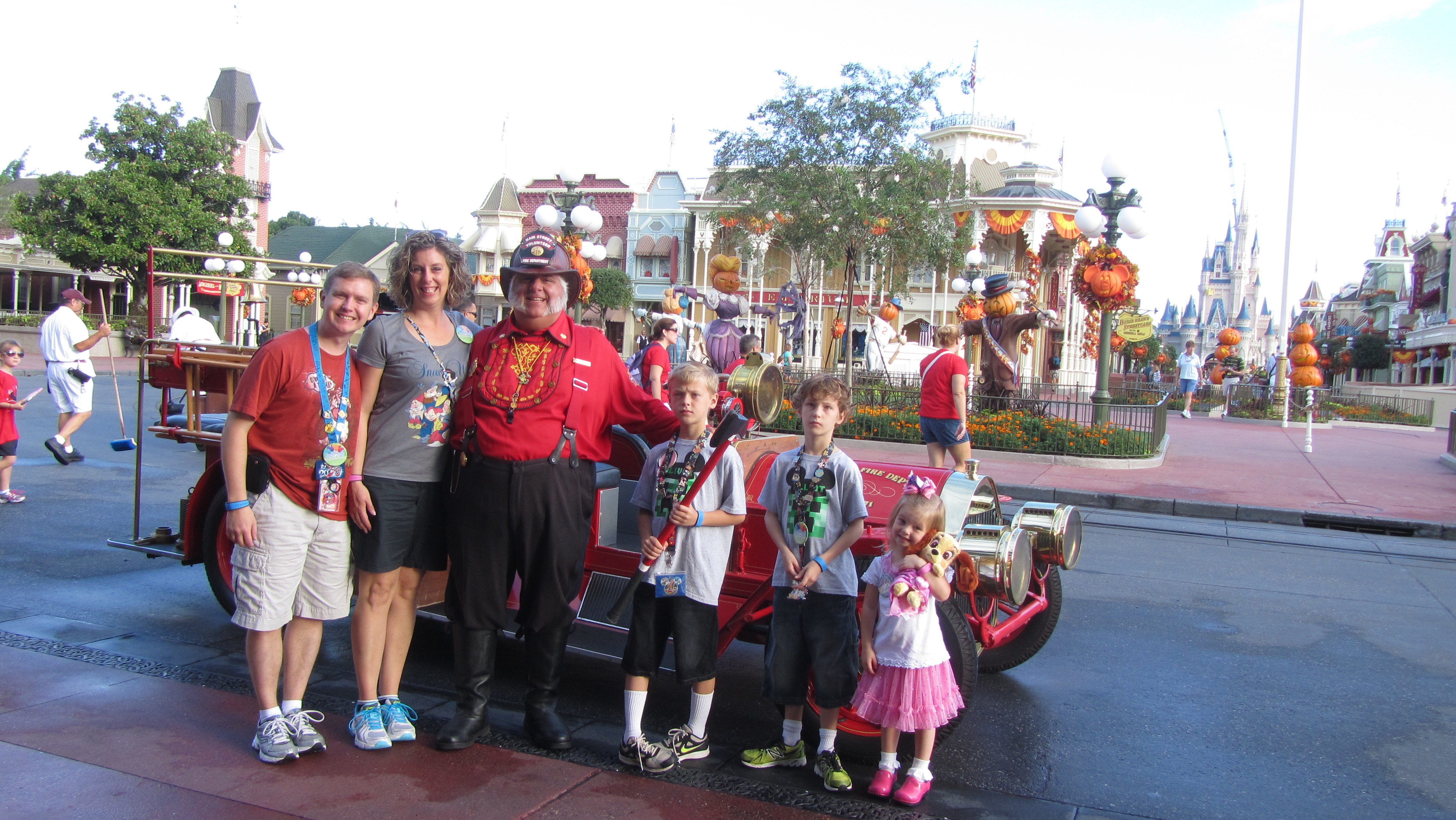 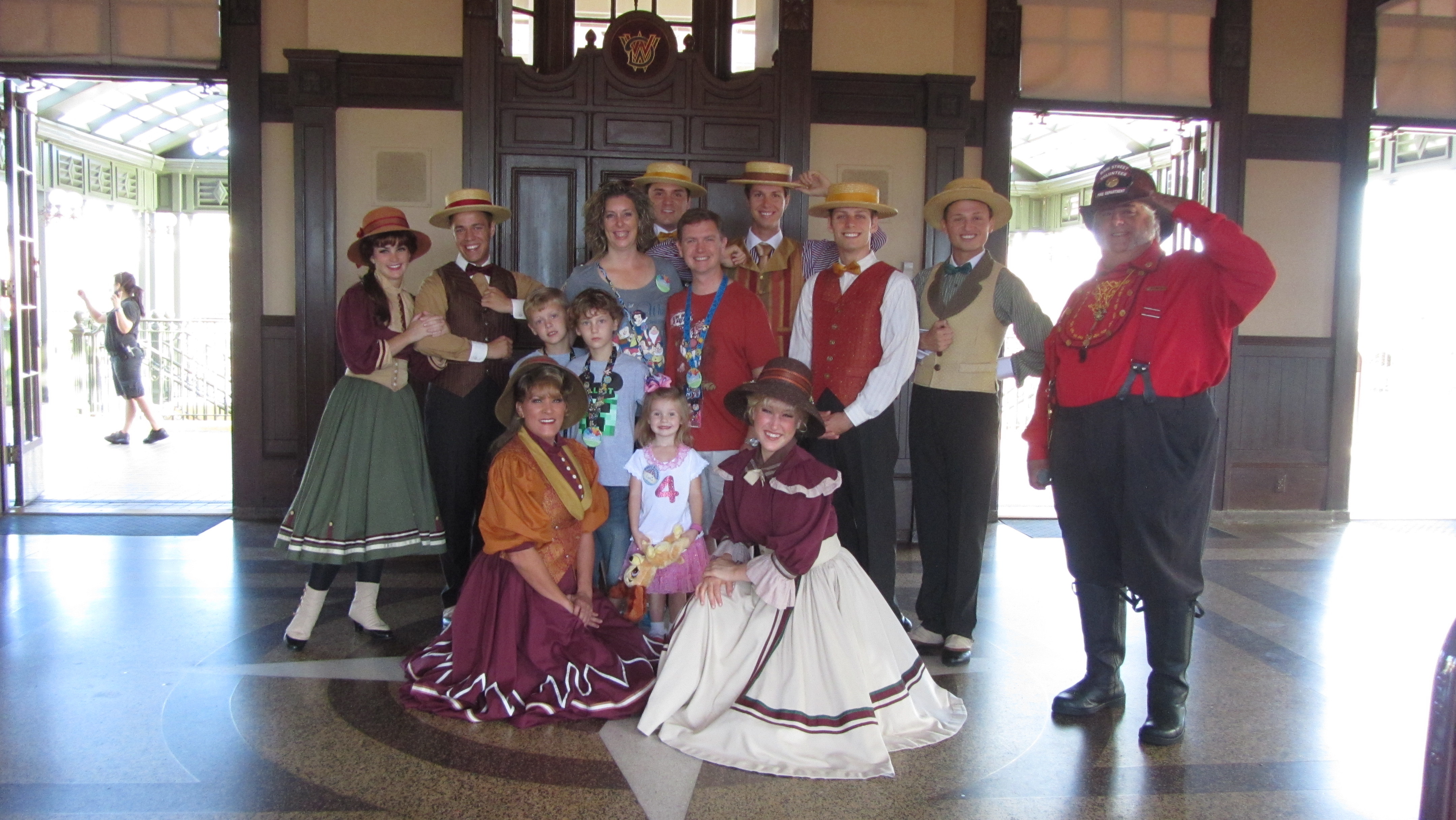 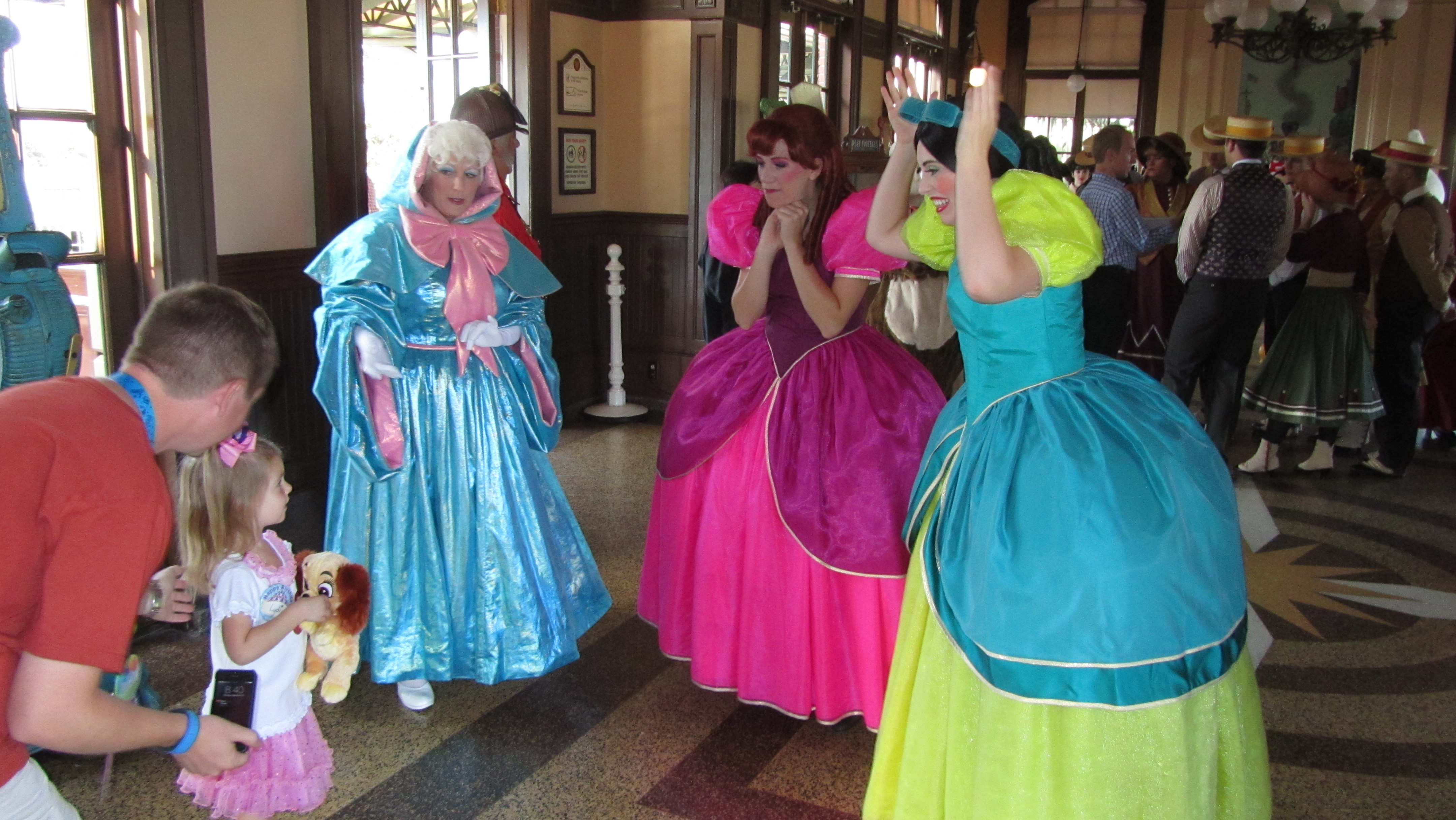 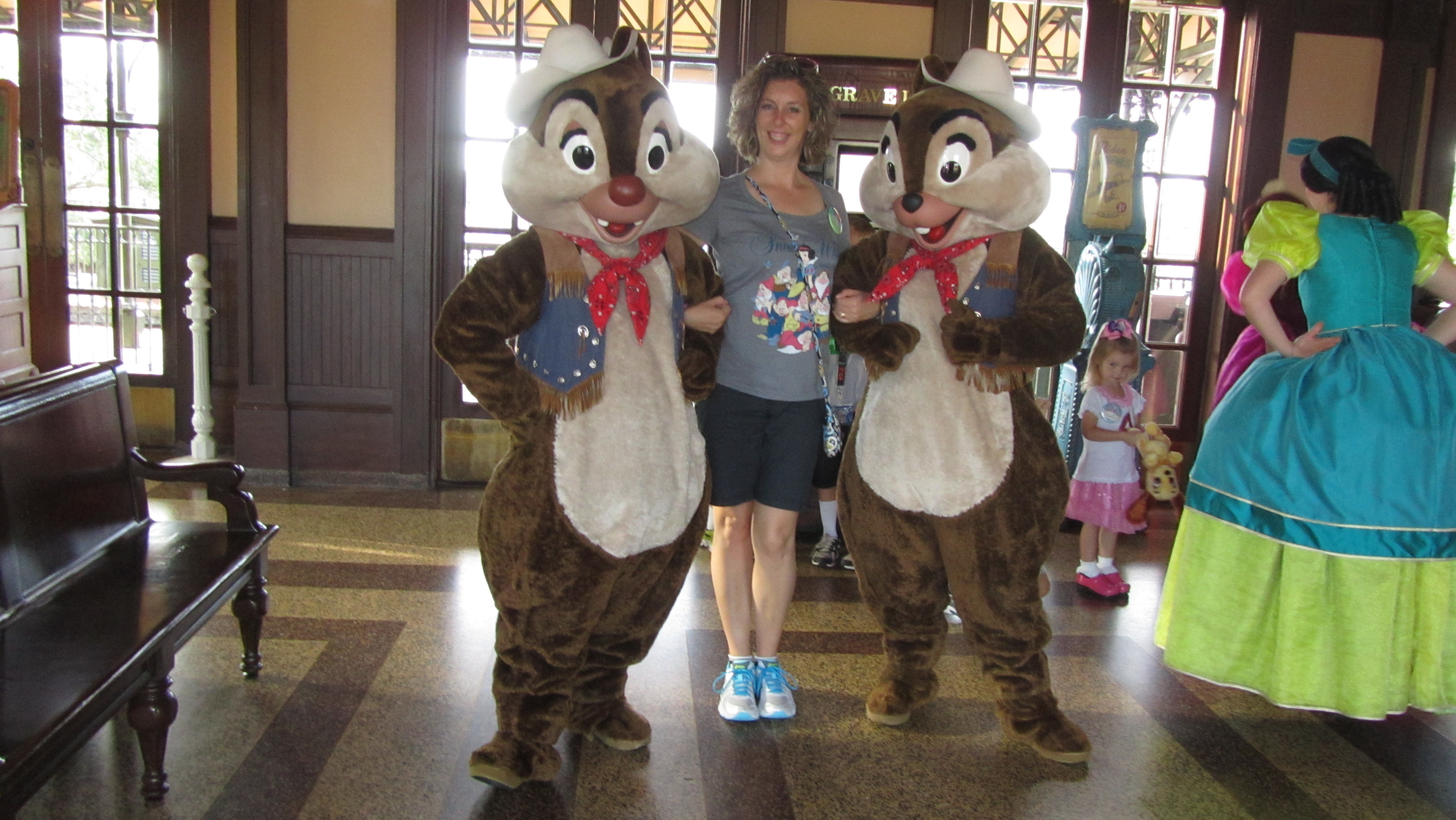 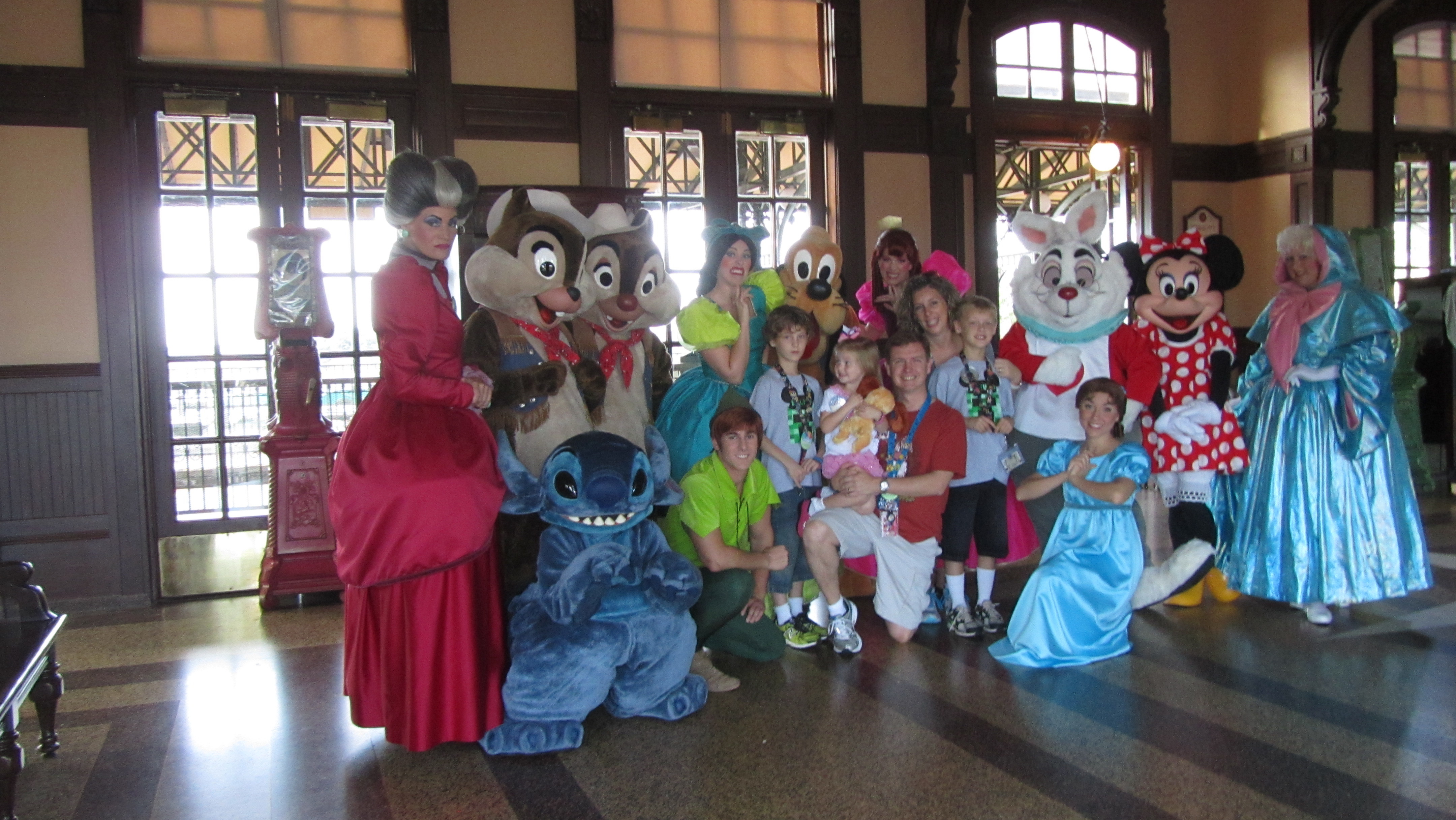 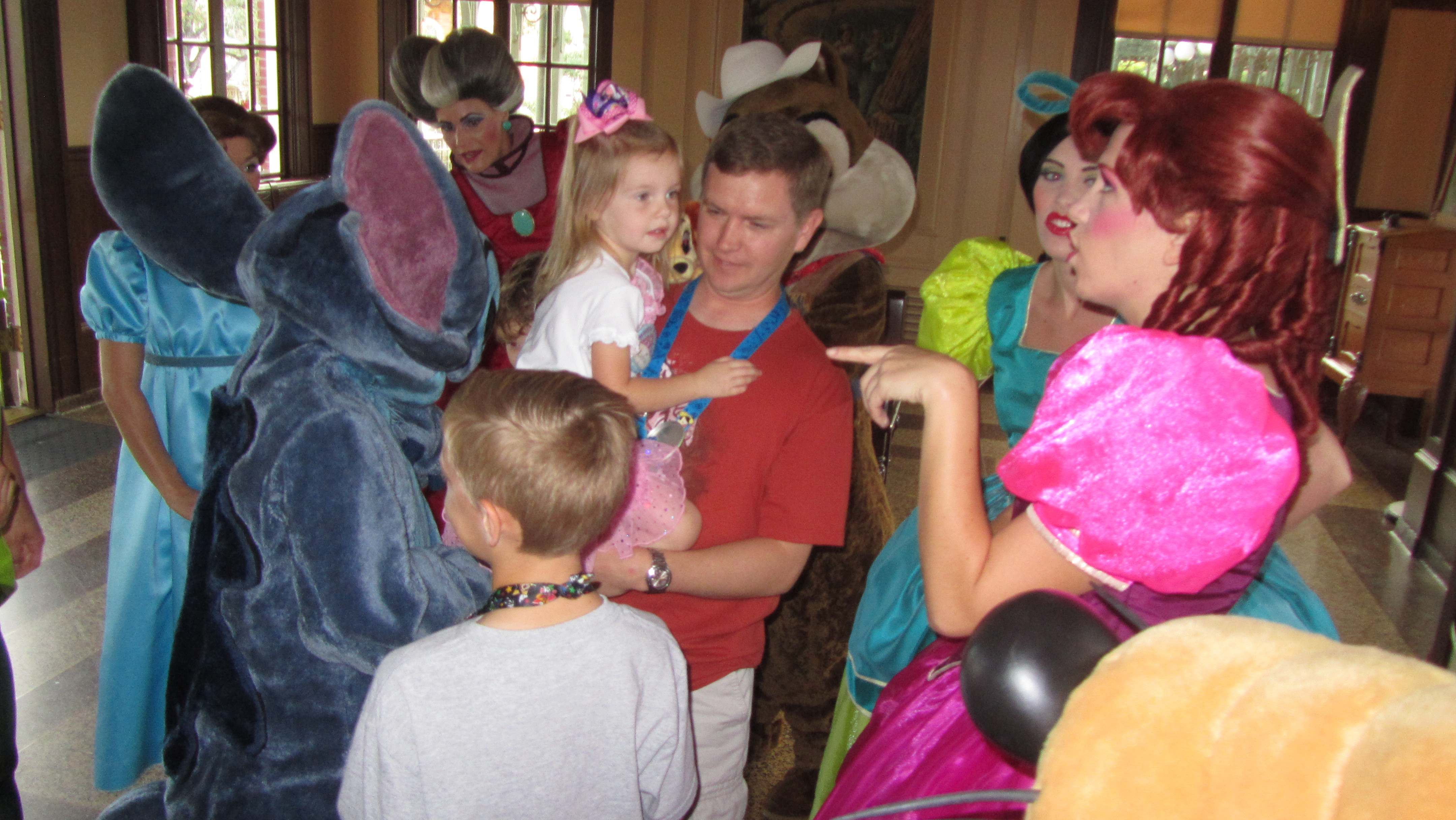 We were told that Mickey would not have time to spend with us, but when he went out to the platform, we were to follow him. 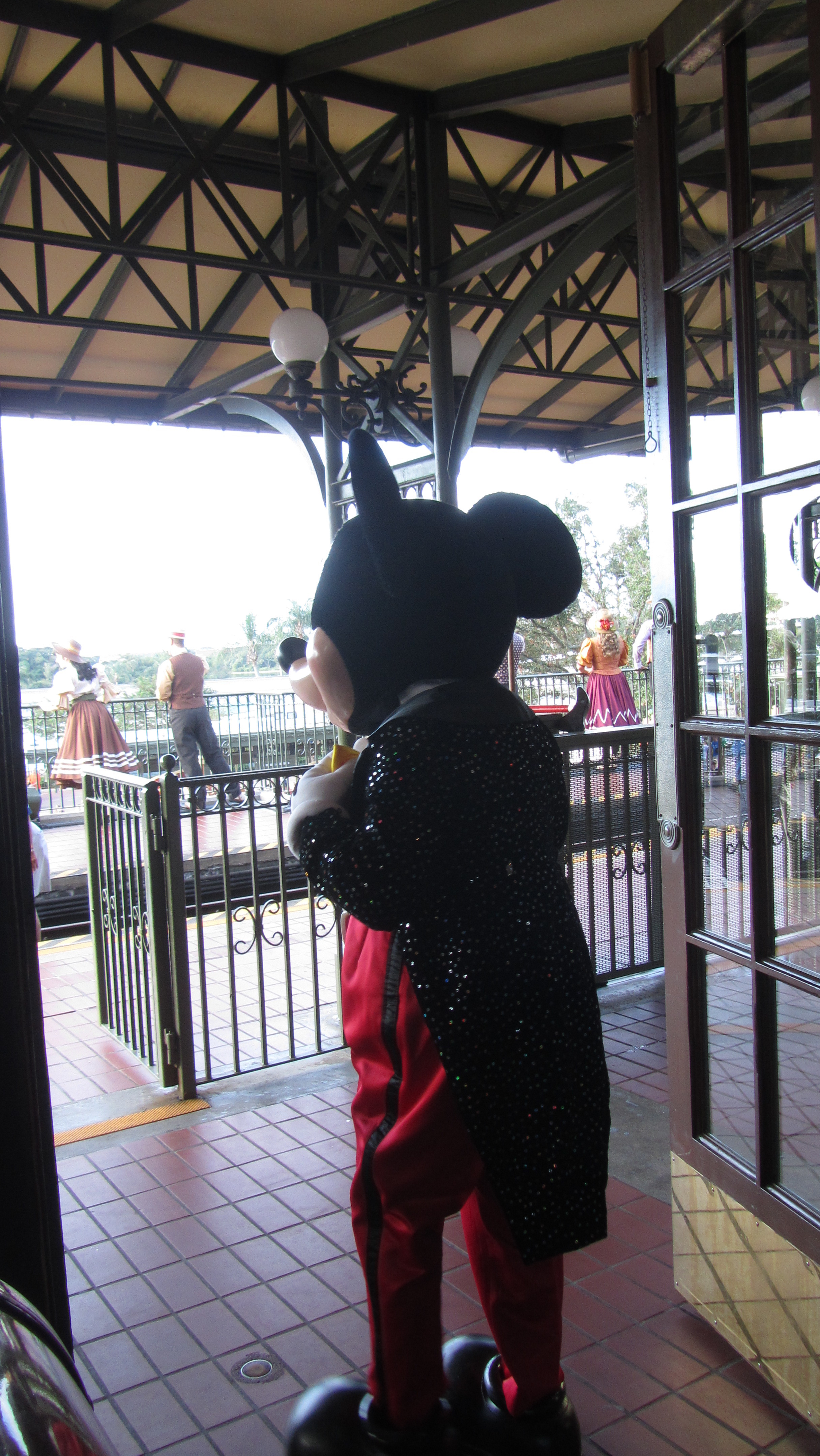 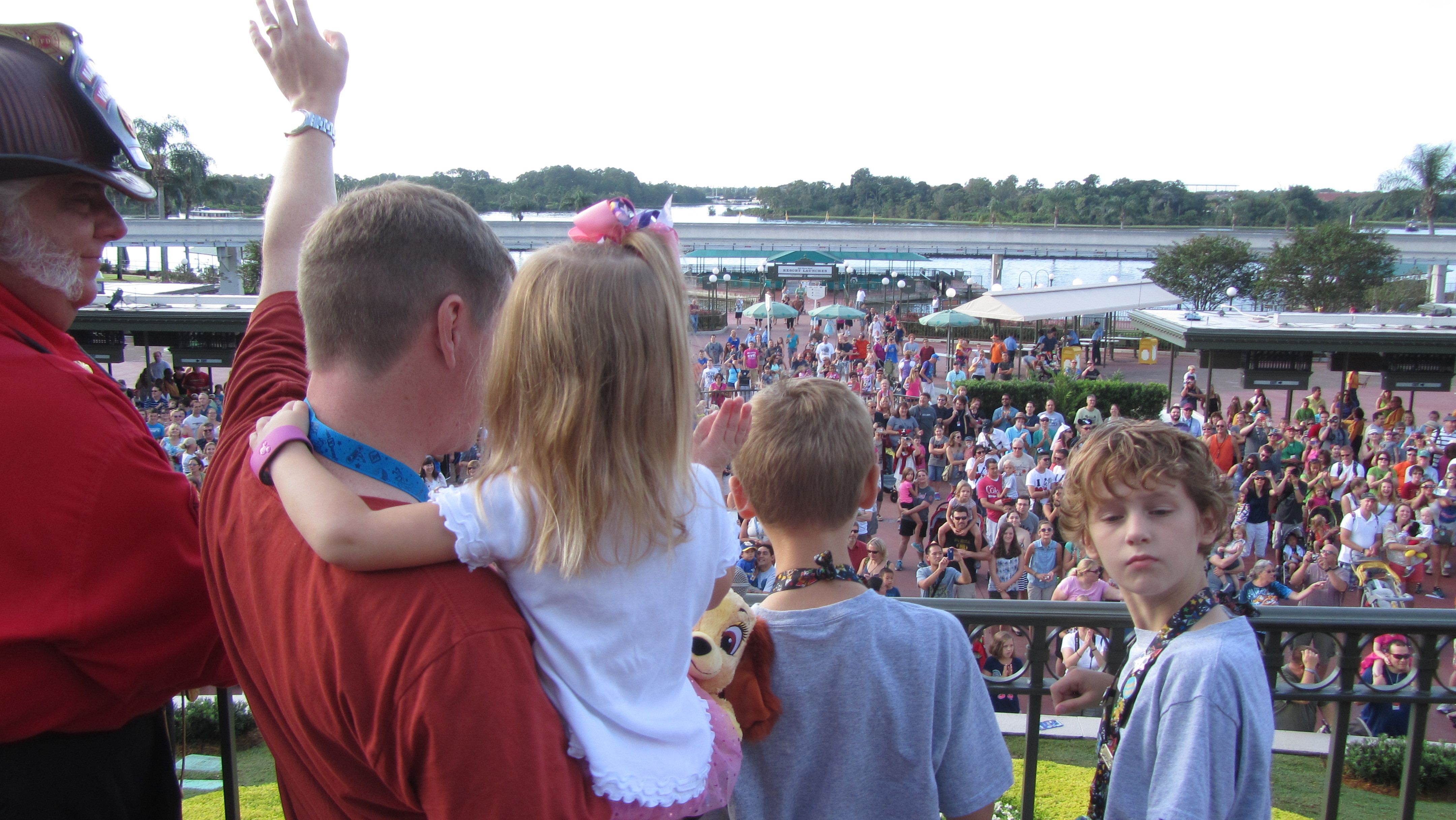 After the show, we were led down the ramp back to the fire engine, where a PP photographer met us and took a few more pics and gave us a card with all of our pics and Chief Smokey gave us an anytime FP to see Mickey and a certificate for an 8x10 of one of our pics. We rode the fire engine up to the castle with ds10 sounding the alarm the entire way! 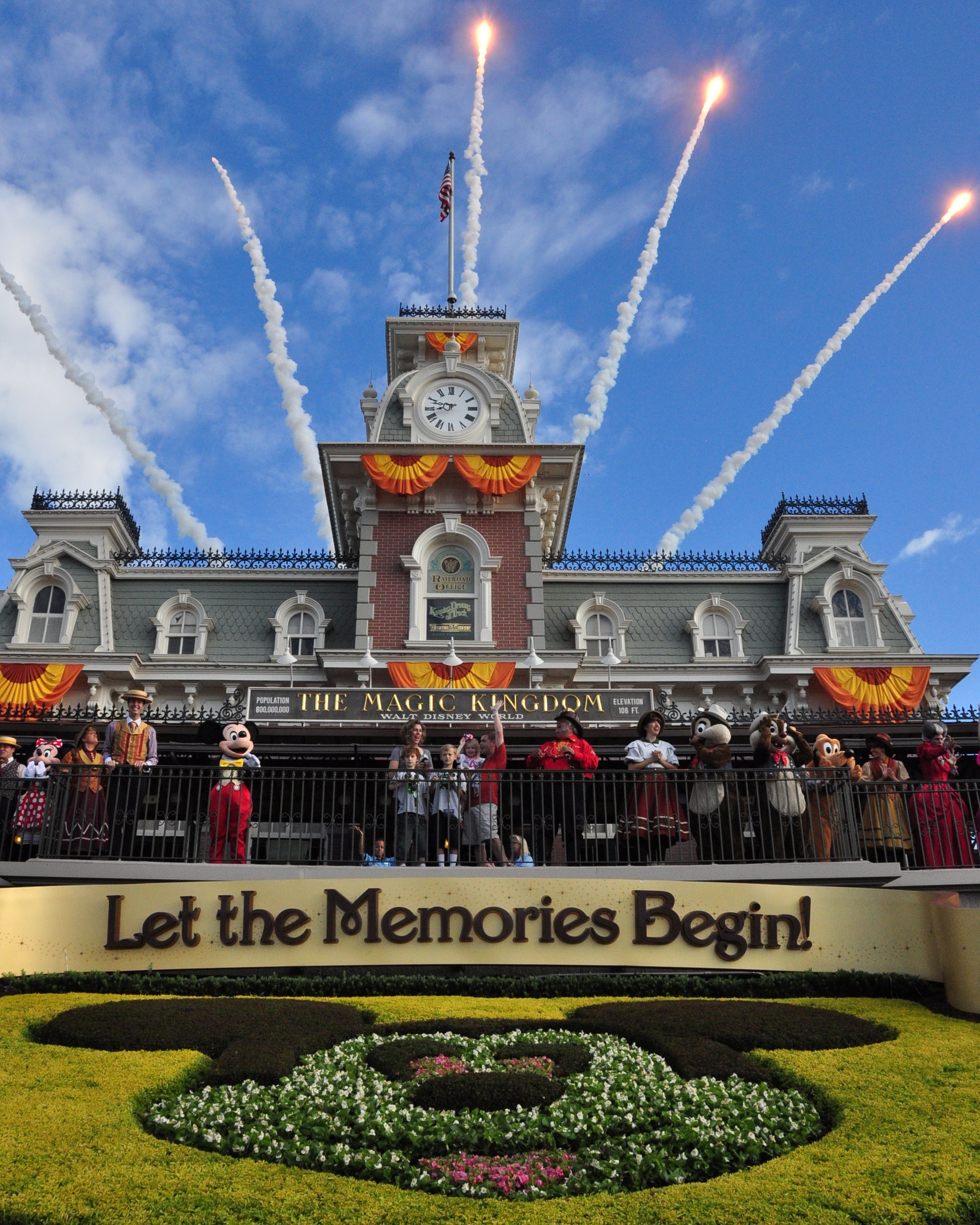 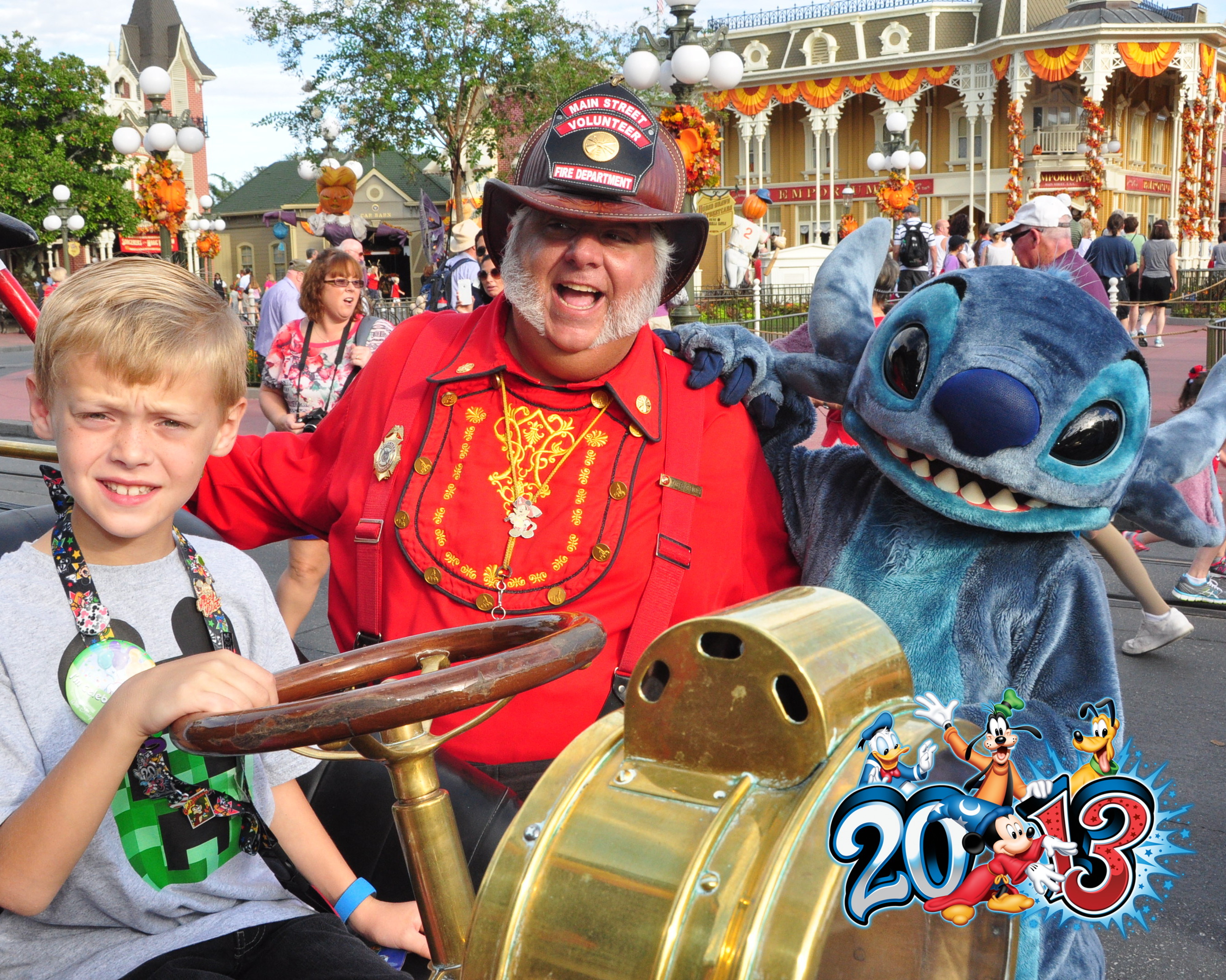 In the summer of 2012, we went to MK for my birthday while visiting my mil. We arrived early that day, but were probably 20 people back. A CM came to the rope 15 minutes before the show and asked if anyone was having a birthday. My hand shot up and evidently I was the first one

He asked us to come up to the rope. He took us into the park. Took many pictures and then drove us up to the castle in the fire engine and we waited at the rope to enter tommorowland, Very magical experience, but not fotd. 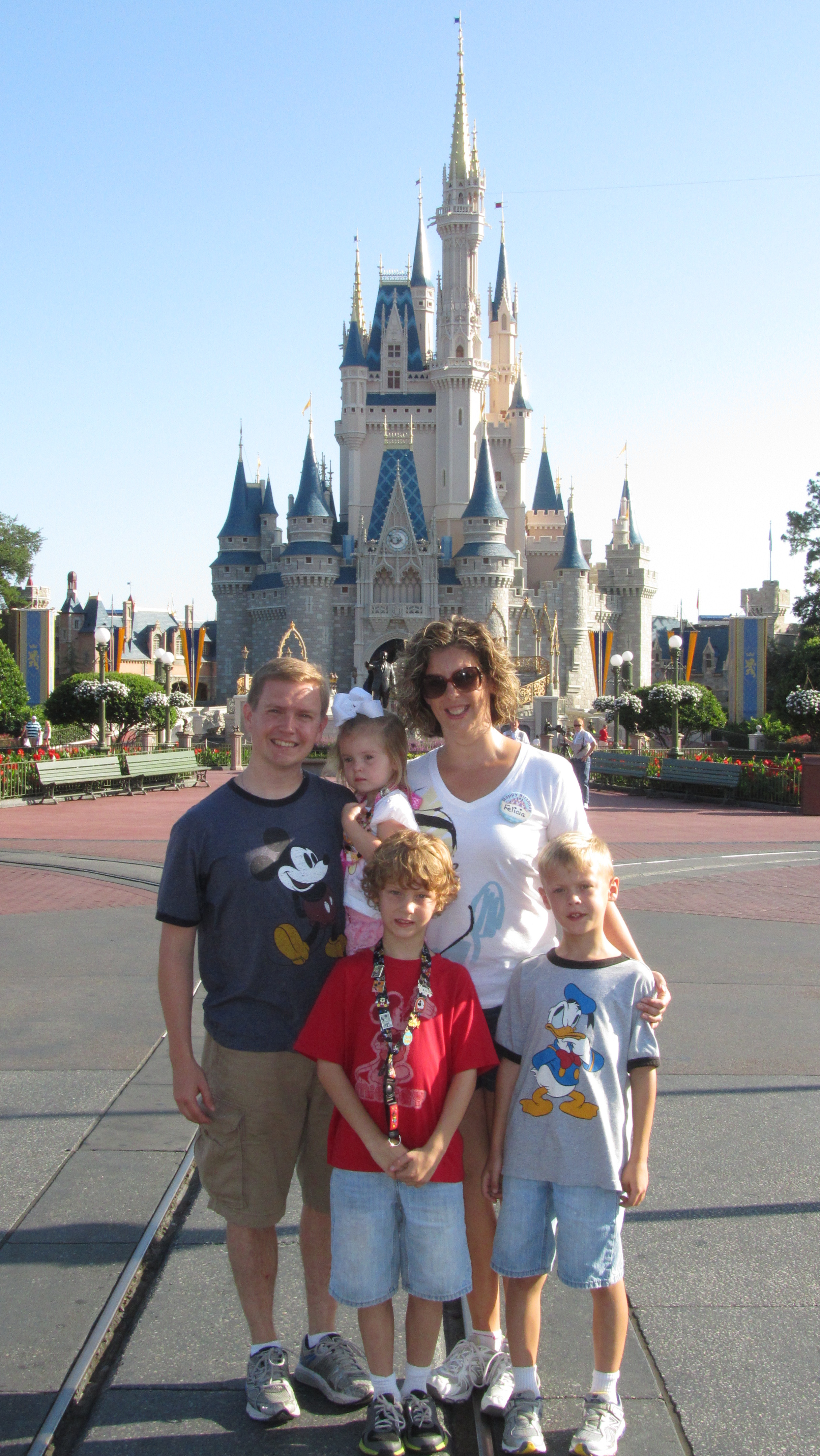 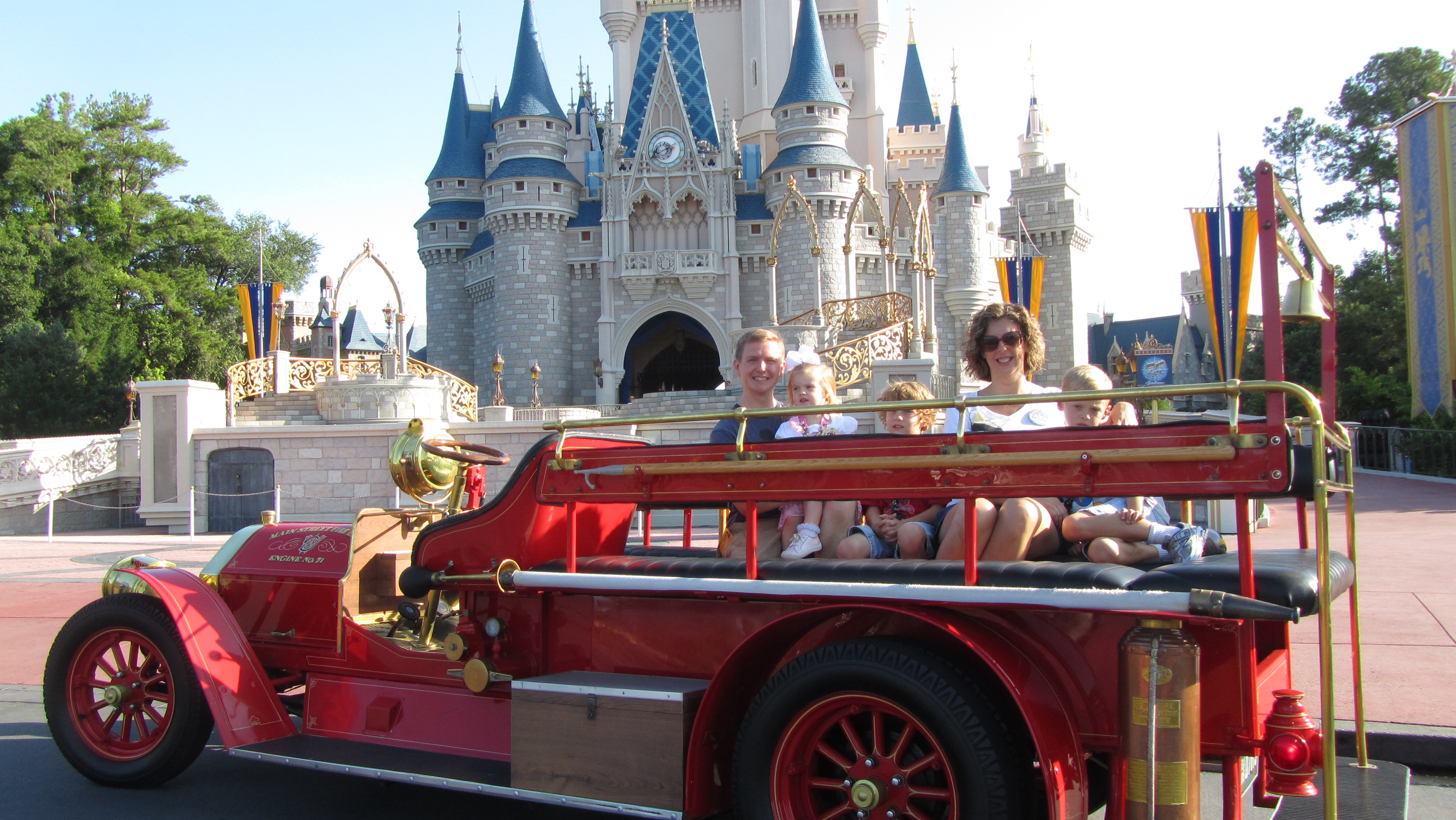 We got there at 7 am on an 8 am opening (EMH) in late January. It was a cold and stormy morning (well, it was cold) so there weren’t many people around. Still remember the CMs pulling the covers off the flowers (to protect from frost) and there were bullet heaters blasting at some of the greenery. We had knit caps and mittens and coats…like I said, it was cold.

So we were just standing there chatting with the CM at the turnstyle. Eventually she said “here, come with me…” We suspected we knew what this meant, but my DS had no idea. We really weren’t trying to get picked - it was not even in our heads. We were just happy to be there.

We didn’t get to ride the train, we just stepped across the tracks and counted down etc…but prior to that, we got about 10 minutes alone in the train station with about a dozen characters. Incredible. Mary Poppins, Alice, Mickey of course, Pluto…we have the picture on our wall.

So, we were there early, we were chatty, and frankly, they didnt have a lot of other families to choose from!

Funny thing, later that same week, we were picked again! But we told the CM to try to pick someone else, but come back if they couldn’t find anyone (yeah, right!)

Woo Hoo! Another Liner fotd! It is a fantastic club to be in!

Bumping in hope of additional liner fotds. Any more?

My ‘liker’ is broken, or I would like all of these posts!! (Actually, I maxed out likes for the day)

Trying some photos now that the MB limit increased. February 2014 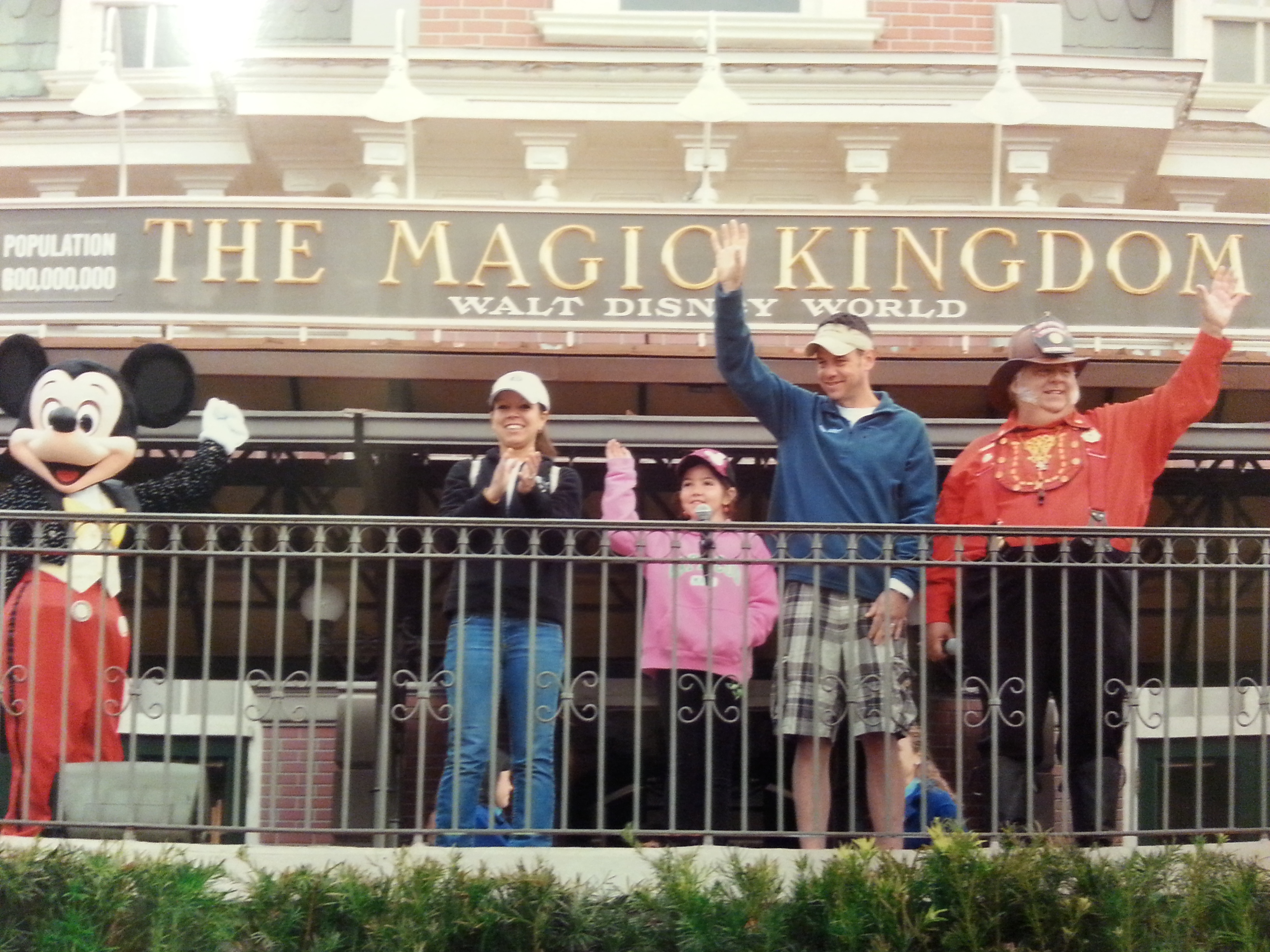 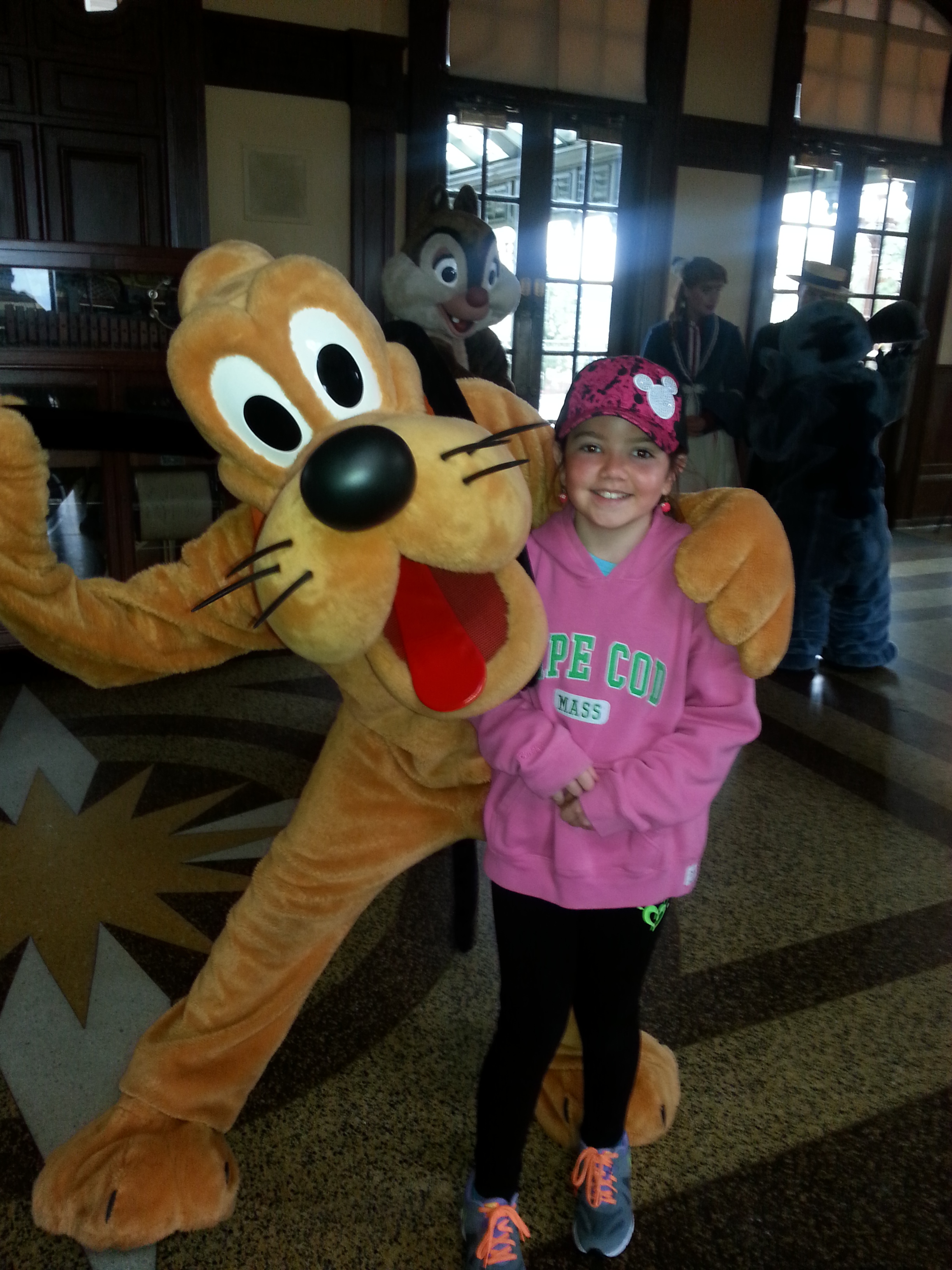 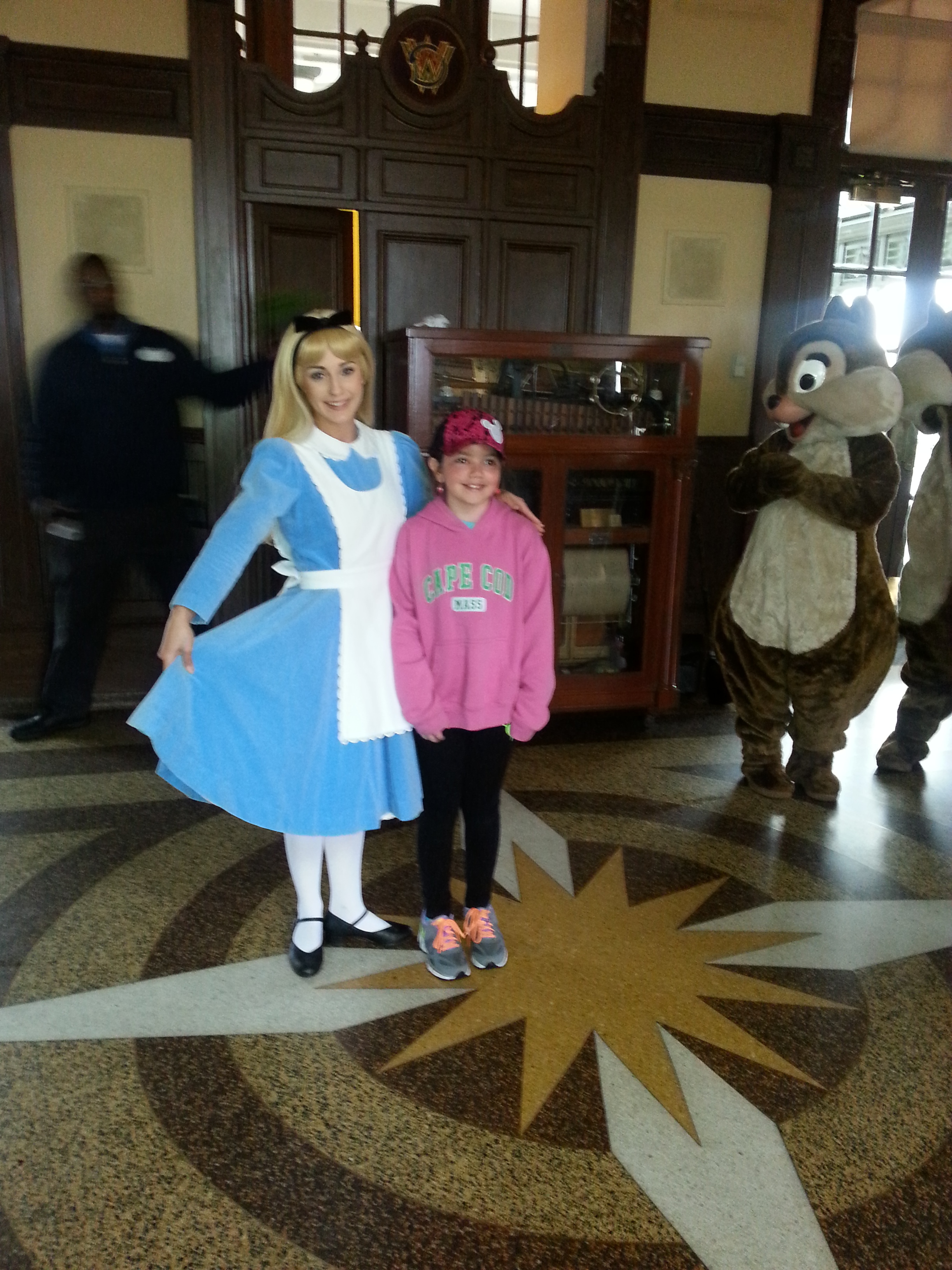 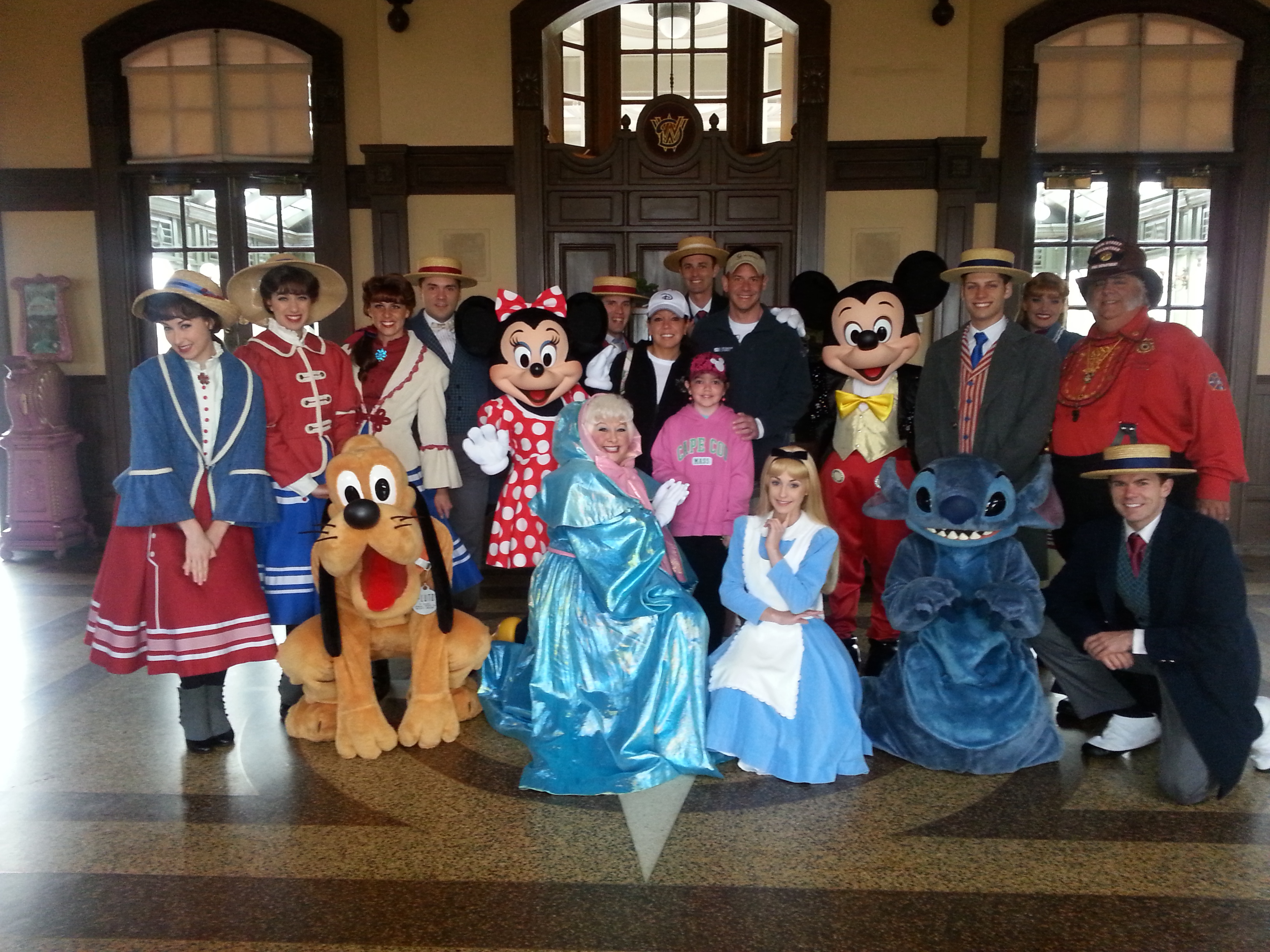 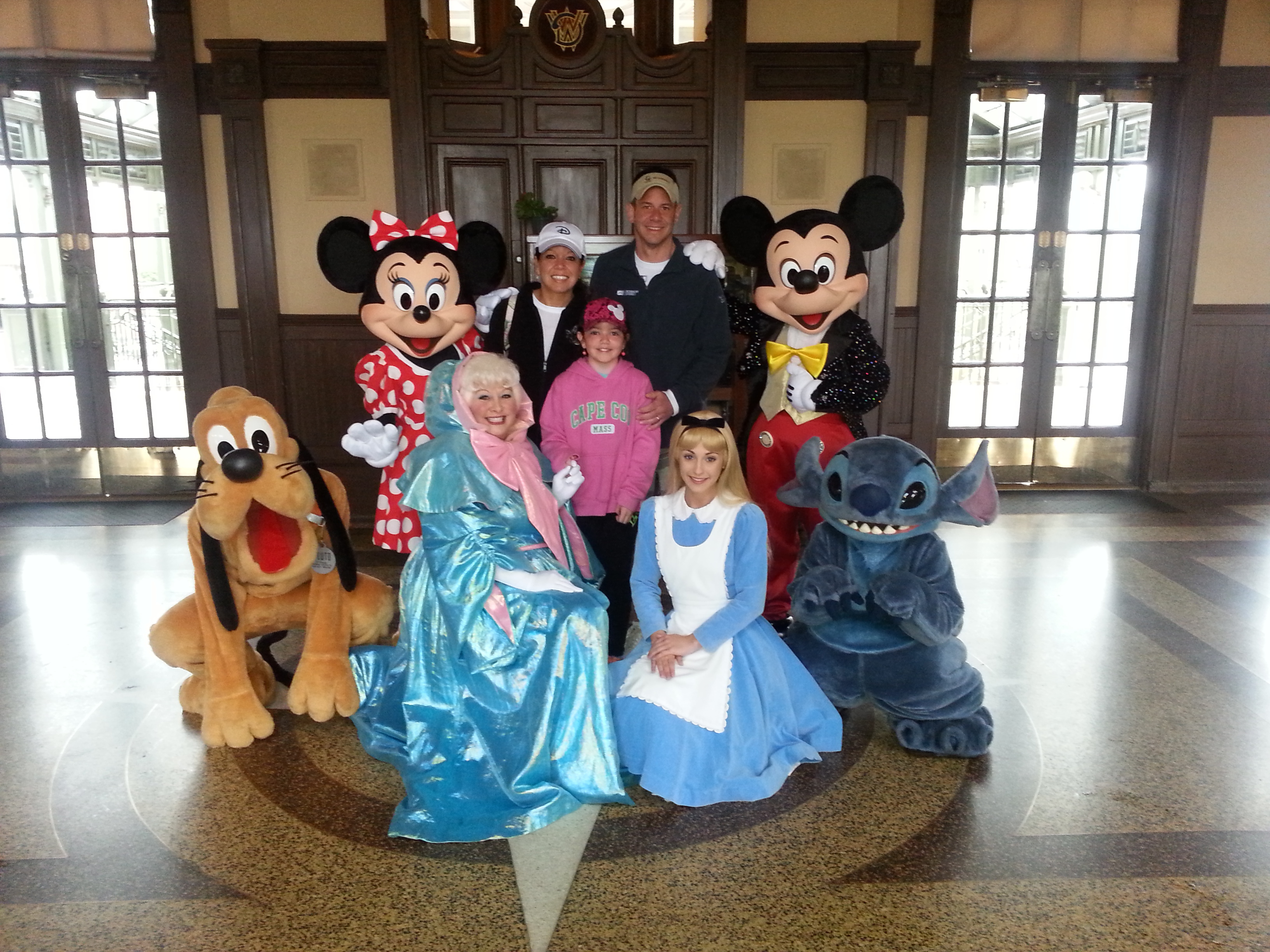 I would seriously cry if we were chosen as Family of the Day!!!

There used to be other smaller scale shows at other parks but now MK is the only park that has an opening show.
I video tapped the opening show one year and then later found out it was a liner family so I was able to send them the video file.

Something I learned that day - Mary Poppins was in the group, but as the PhotoPass CM was getting ready to take the group picture, Mary discretely stepped out of the picture.

And then stepped back in when the PhotoPass CM used our camera.

We were told later, as we were reviewing our pics at the camera shop, that Disney doesn’t own the rights to Mary’s image, so PhotoPass cannot get her in their pictures.

edit - interesting, as I was looking for pics to post, I noticed that our pics during the opening ceremony DID include Mary. But inside the station, she definitely moved out of the picture.

2 pics from our time. A detail I recall after looking at the pics…because it was a seriously cold day, Alice and others were wearing gloves - even Snow White - but hers were the color of her skin. (also notice her long sleeves…) 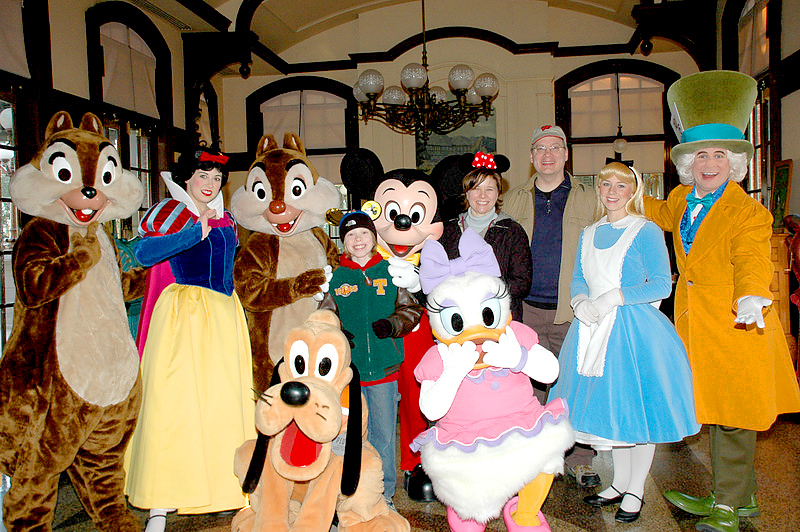 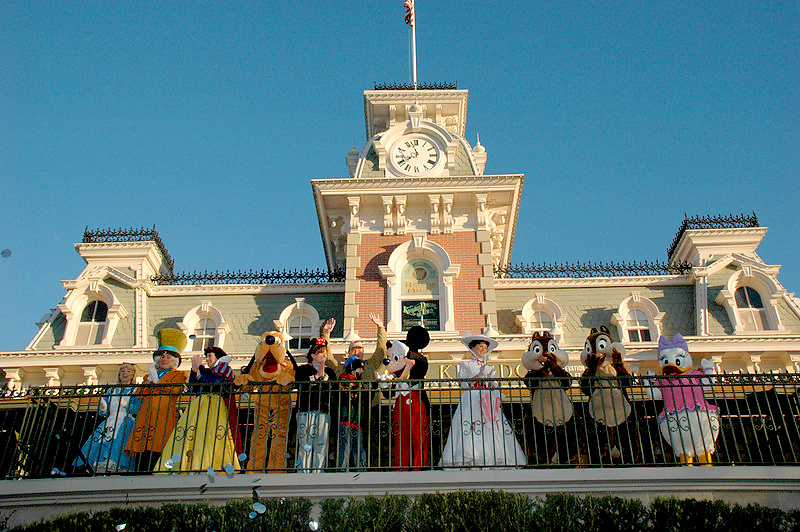 I wonder why some mornings have more characters than others? We lucked out having the step sisters. They were a highlight and we saw them 2 more times later in the day. They went nuts waving to my boys and throwing them “I love you” signs. During the parade, they saw my dd had been to BBB and made a fuss about her dress. I want them to be my step sisters!!
Very interesting observation about Mary Poppins! @MDU

I love love LOVE these stories! I will never, never count on it, but we plan to RD at MK 3x at our trip, and plan to get there very early each day. How amazing would it be to be chosen to do this for my 3 girls!

Does it truly seem to be random who they choose, or do you think dressing a certain way, like having on Mickey ears or something, or perhaps chatting it up with a nearby CM seems to help your chances?