For the last couple of years I have stayed at club level, so I could buy 3 extra fast passes. Now that they have taken away fast passes do you think they will offer something else in place of it. Also, it was nice to replace a few meals with offerings at the club level, but they were buffet style. What do you think will replace the buffet?

I have no answers but I’ve also been wondering how they will address the food situation for CL.

I would assume cafeteria style. Or possibly packed “grab and go” food.

I thought @PrincipalTinker said CL was remaining closed for the time being when they open? That was maybe when booking was still open.

The FP thing was only ever a trial and never actually advertised anywhere! If and when it opens I don’t see what they could have in the current set up for quite some time.

I saw someone report they received a call that all clubs were going to be closed so Disney was changing the booking.

It was a message from a TA in a WL group: 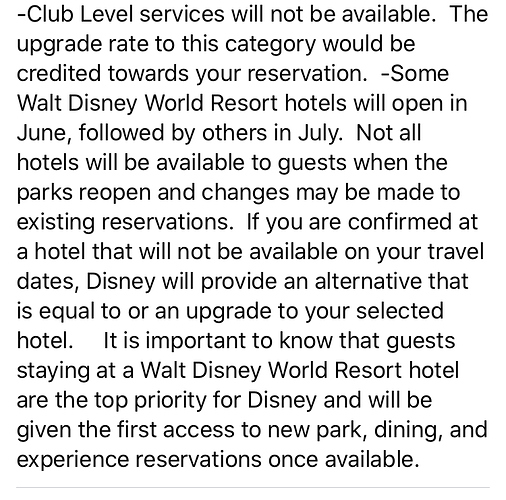 Thank you. By TA do you mean travel agent?

Thank you! I have been trying to get info on this. We are club level Labor Day weekend and December

“If you are confirmed at a hotel that will not be available on your travel dates, Disney will provide an alternative that is equal to or an upgrade to your selected hotel.”

This is consistent with what I was hypothesizing. Of course, it doesn’t mean that they won’t end up opening everything…but I just have this feeling they will try to eliminate bookings at the All Stars so they can to reduce bus usage by upgrading those folks to something else.

If I were Disney (ahem), I would look at it like this:

In general, the All Star Resorts are the furthest, in terms of bus travel time, to the parks (other than AK). As a result, if you move the buses from the All Stars to other results, you are MOSTLY reducing the cycle time for any given bus.

Put another way, if a bus from All Star takes 20 minutes to go from the resort to MK, and then 20 minutes back…then the total cycle time is 40 minutes for a single bus. If there are 1000 guests in that resort, and they will only allow 50 people on each bus, then a SINGLE bus would need to 20 cycles, or 13 hours to get everyone there. (Obviously my numbers are illustrative only.)

But if those same 1000 people are now moved to a resort where the cycle time for the bus is 15 minutes each way, or 30 minutes, then it would take 10 hours. In that extra 3 hours, an additional 300 people could be moved, or an increase of capacity by 30%.

Furthermore, if you move people from All Stars to a resort like Pop or AoA, then the Skyliner further alleviates the strain on the bus system. The capacity of Skyliner is barely affected at all by all this (some yes, but not in the same way the bus system is).