EXPRESS TRANSPORTATION:
On Saturday, (12/10/16), my husband and I decided to take advantage of Disney’s New Express Transportation bus service. Normally we don’t pay for extra services, but this was our birthday trip and we were without our kids so we decided to splurge a tiny bit. After the Wilderness Back Trail Segway we drove to Magic Kingdom. 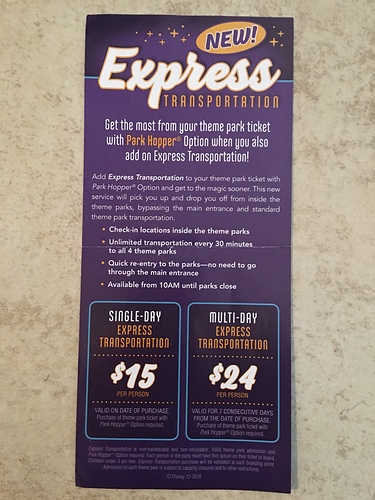 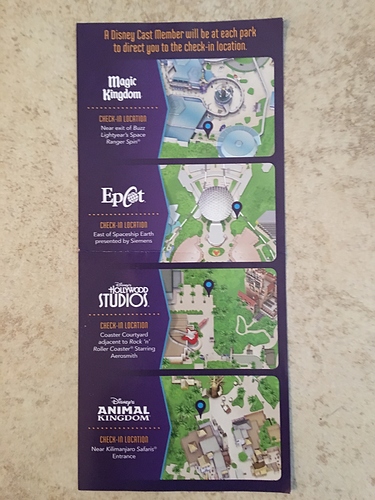 OUR PLAN::- to use a couple of MK FPs, head to Epcot for dinner, Test Track, and a stroll around World Showcase for drinks, then head back to MK for fireworks and a few more attractions.

MAKING THE DECISION:
On our drive from Fort Wilderness to the MK lot we are already beyond the toll plaza and need to loop around past TTC and the Poly to enter the parking lot. We could see that traffic was insane on World Drive in both directions & Seven Seas Drive. I counted 21 vehicles in line at the Guard Gate for the Poly which had backed up on SS Drive. We had to park about as far away in the MK as possible, but after a few hours on Segways decided to stretch our legs and walk to TTC. From there we took the monorail and could see traffic was even worse than previously thought. World Drive was backed up southbound beyond Space Mountain-as far as we could see. I began to wonder that unless these Express Buses could fly, they weren’t getting out of there fast at all and maybe it wasn’t worth it.

FIRST LEG OF THE TRIP:
Upon our arrival the parade was soon to start so we took advantage of the cut through behind Main Street being open and went straight to Tomorrowland to inquire. The lone CM at the Kiosk seemed happy we knew why she there. We asked her about a schedule and were informed they could not give out that information to guests as the schedule changes daily. After some prying we were finally able to learn that it was departing at 10 and 40 after the hour that day. We also inquired about the traffic and asked it they were running on time, she alluded there was an accident earlier and it should be better later on. After using at Splash FP we hoofed across the park and returned to the Kiosk at 5:03. We quickly purchased our Express Transportation after our bands were checked to make sure we could park hop (we have AP’s). The media was not added to out account in MDE or linked to our bands. We were each given a plastic card to use. 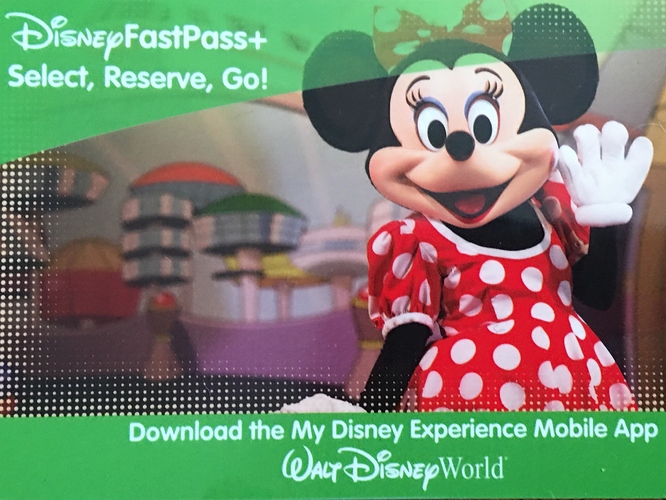 Then we were escorted backstage. There was queue set up for EP, HS, & AK. There were 2 women waiting in the line EP line, all else was quiet. Our bus arrived and we boarded, they changed out drivers and we left promptly at 5:10. We pulled out through the gates between Space Mountain and the Monorail beam and 10 minutes later we had not yet passed the Contemporary Resort! Traffic was still backed up beyond SM heading Southbound. I began to get nervous DH would question my logic in using this and reminded him as we sat not moving at all, that we would not need to park, tram/walk to front of park, bag check, or scan at the tapstiles again. Fortunately he was not complaining and agreed. At the 15 minute mark we finally turned on left Vista drive, drove pass FW, Golden Oak, turning Rt on Bonnet Creek Pkwy and then Rt on Overpass Rd. From there we passed the Cast Member lot behind Norway & Mexico and wrapped around to the east side of Spaceship Earth. We were greeted by CM’s and escorted into the park next to the restrooms east of Spaceship Earth. Arrival time was 5;29. We immediately inquired about the return trip to MK. Once again the time table book was securely guarded (Lol) but we were able to find out that the buses from EP back to MK were also at 10 and 40 after the hour that day. We also thought enough to ask what time the LAST Express Bus left. Turns out it was at 9:10 for a 9:30 park closure evening.

RETURN TRIP:
We originally planned on the 8:40 bus, but decided to enjoy World Showcase a little longer and took the last bus at 9:10. DH checked us in while I was in the restroom, no one ever questioned me when I got in line. This bus had about 14 passengers. The bus driver was probably the funniest CM we have come in contact ever. He had everyone laughing to the point of tears. He also noticed 4 of us had Birthday Buttons and we all sang. It was quite an enjoyable return trip. We arrived back to MK at 9:30 and were escorted back to the on stage area between Buzz and CoP. I thought ahead and booked us a 9:15 FP for Buzz:-) We quite enjoyed the rest of the evening as MK had quieted down a bit. Exiting to our car still took the better part of an hour.

FINAL THOUGHTS:
For us, and for our plans that evening the Express Transportation for $30 was well worth. Total travel time was 49 minutes round trip an we bypassed to bag check and tapstiles. I immediately told DH we will get it every trip, but quickly began to realize it may not always suit our needs. For instance if you have a car, you need to return to where your vehicle is parked. Also, the multi-day pass is only good for 7 CONSECUTIVE DAYS - so our on yearly 10-12 day big trip we would have to carefully plan when to start it and when it would be best used. It may be that we only need one day/the Single Day pass, if any at all. I do know that my DD13 would especially like the VIP type service, so that alone may justify the cost for our family:-)

Thanks for the review. Interestingly I have never heard of this service. Is this only for AP holders?
Where can I find more detail?

Do you think the back stage visibility would ruin the magic for kids?

The service just started on December 7, 2016 and you need to have either a Park Hopper or AP. I tried to post the brochure which has additional details. Hopefully it is showing up

Thank you for the review! My DH and I are definitely purchasing this for our trip that starts 12/17, as we love to park hop and the price for the seven consecutive days is fairly reasonable by Disney standards. If anyone has any questions they would like to get answered, please let me know!

The service just started on December 7, 2016 and you need to have either a Park Hopper or AP. I tried to post the brochure which has additional details. Hopefully it is showing up

I see it now. Thanks! This seems quite worth it, especially if traffic is clear. Strange how the CM were so hush hush about the times. Kinda important info if you want to plan to be there to catch the bus!

Do you think the back stage visibility would ruin the magic for kids?

You didn’t answer this question.

My DDs are 13,9 and 7 and would love to see anything they could backstage. Back stage and on stage are so different that it’s almost hard to relate the two. It’s like flipping a switch - Magic on/Magic off

@Bymers2000,
Thank you so much for taking your time to post this–in great detail, also. We have a four day trip in just two weeks, and I’m still battling (4th month) plantar fasciitis so I’ve been trying to figure out some solutions (in addition to the custom orthotics, stretches, massages, and taping). This seems to be a really great one. A wheel chair doesn’t seem very practical at all especially as availability in each park isn’t guaranteed. Fortunately, one stop (Epcot’s) is fairly close to the exit so we won’t have to walk a mile (ok, HALF a mile) to our value resort bus stop.

Thank you, I am considering this option to reduce transportation time on our 5 days in the park the first week of December. Plan to do all 4 parks so estimates of the service travel times will be important for ADRs.

How did the Express Transportation Option work out for your trip?