My ds5 loved SDMT 2 years ago and can not wait to try BTMR this trip. DW was not keen on EE, but after some more pushing and watching the ride last night, it did not look much more extreme than BTMR. If he does well on this, is EE comparable?

I’d be interested to know as well. My fave ride is BTMRR but I won’t touch EE with a 10 ft pole. LOL. I think it’s the backwards part for me, but I’ve never ridden so now real clue. My DD6 loved SDMT and BTMRR but wasn’t fond of EE.

Everest is doable by 6- and 60-year-olds alike. My DS6 rode it. He couldn’t ride BTMR at the time since we went during refurbishment. But I’d say the overall intensity is similar to Everest. Everest is an overall better ride, IMO, but I thoroughly enjoy both.

It is hard to make a direct comparison, however, since the are different ride experiences. Some might not like the backwards part, or being in the dark some of the time, or the Yeti.

I think EE is definitely more intense than BTMR. Not by a ton, but it has a higher height restriction and the track itself goes much higher so the drops are bigger. Plus, as mentioned, it does go backwards, though only for a short while.

DS9 is a daredevil and he loves all the coasters. But he will only do EE once per trip (and this is the kid who will do RnRRC at least 3 times each trip!). Not sure what it is about EE, maybe it’s the backwards part or the fact that it doesn’t have the shoulder harness like RnRRC but he’s always more wary on EE.

EE is more intense. One of my 9 year olds didn’t like it because of going backwards in the dark. He loves BTMR though. My other 9 year old and my 6 year old love both.

I would say EE is quite a bit more intense than BTMR. That backwards part really gets some people! My DD7 loved it last year, but found it a bit intense this year and didn’t want to ride a second time.

With BTMR this year on the other hand, she pretended that that it was so boring and tried to ride with her arms folded and a bored look on her face. Haha! But that was just to poke fun at me because it’s my favourite ride and I made her ride it a bunch of times with me (DH and DD4 don’t like coasters!). She actually loves it too but thought it was so funny to pretend that my favourite ride wasn’t scary at all!

My 10 y/o (9 during the trip) will tell you in a heartbeat that EE is his favorite ride at Disney! He became a roller coaster junkie though. He loved RNR at HS too! That’s us in the middle! It’s definitely not for everyone though! 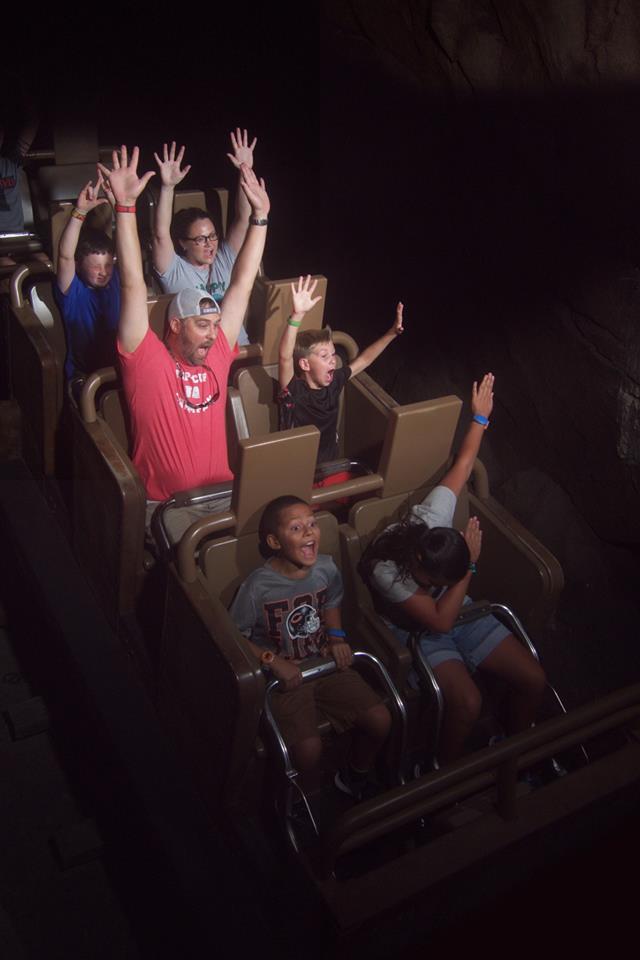 My BIL LOVES BTMR (he did it like 10times during our last trip). EE? He did it once and swore he would never do it again. He was terrified.

I personnally love both, but EE is much more intense that BTMR.

I’m with your BIL. Except I won’t even try EE, or RnR. I’m hoping I can find the courage to try Slinky, but it looks high …

I doubt I’ll do Guardians either, but can’t wait for Tron which I believe is fast and has big curves in it but without any big drops.

Thanks for all of the thoughts on this. BTMR is on our 1st day, so I will be able to see how he does (and my dd7 as well for that matter) on it to see if he wants to take the next step. With as short as the backwards part is, I think he will be fine there.

My older daughter is a daredevil who will go on any roller coaster and loved EE at age 7. My younger daughter, who is more cautious, loved BTMRR at almost 5. She didn’t get to try EE until our next trip when she was almost 8. She liked it and went on it multiple times but every photo from the ride has her looking absolutely terrified!

But she happily went on it over and over!

Our family loves both- BTMR has more sudden moves and turns that move you around in your seat whereas EE is much more smooth but does have the height factor and going backwards.

BTMR is more side to side speed - intense curves while EE is more intense drops plus the backwards part and the darkness with the Yeti. Much different coasters - both really good in their own way. My son loved both from a young age - as soon as he was tall enough to ride. There have been times EE has bothered me a little where I need a breather after - BTMR never has.

I think EE feels more intense. I agree that it feels faster, taller and the backwards part can make it a more scary experience for kids. When my DD was 6, she barely handled EE (and had no desire to ride it again), but loved BTMR and went on BTMR multiple times on the same trip. A year or 2 later, she had no problem going on EE and wanted to ride it non-stop.

I think part of the issue for some kids is that EE looks much more intimidating with its track height as you look at it which is a reason DD didn’t want to ride it when younger.

Both are great rides though and favorites in our family. Have a great trip.