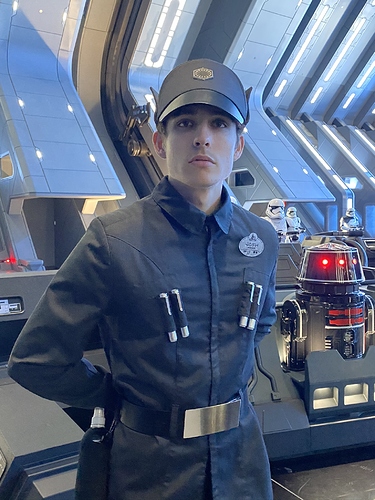 I posted this photograph of a CM at ROTR the other day and it made me wonder: Should I have asked his permission to take the photo?

In my case I took it for the creepy reason of wanting to make a full-size wax model of him as part of a shrine his enormous handsomeness inspired me to construct.

Is permission to photograph CMs implied? Given that they have to stay in character would the conversation have been awkward?

I always ask first, but I think what you do with the photo matters more than the taking of it. So… don’t know how that applies to you. Sounds like personal use so probably acceptable?

Was he in character and part of the show?
If so, I think photos are fair game.
He does look like he’s playing a part.

I think that’s very different to, say a CM selling you popcorn, where it would be very strange to just take their picture randomly without asking.

CMs are constantly having their pics taken by guests, whether they are aware of it or not. Many end up on bloggers’ websites. I wouldn’t be surprised if Disney makes them sign a waiver since they will be in so many guests’ photos.

I’m so grateful to have missed the film and photo everything Era as a teen. Having the freedom to dance like no one is watching at my school things. I would have ended up on tiktok and very much made fun of. I worked at six flags and almost did fright fest. Would have no issue with being the princess handing out candy in folks photos.

They have for a while now. I signed a waiver 25 years ago. Long before bloggers and Insta/Ticky Tacky whatever. It was also before we were allowed to take the costumes home.

Back then, a lot of guests would both ask permission and not. I always thought if I was in costume and standing under a giant mushroom ala Alice in Wonderland, I was fair game, much like a prop. But I also never turned down a photo op with guests when asked. I had quite a few pictures taken with various DLR AP regulars.

Is permission to photograph CMs implied? Given that they have to stay in character would the conversation have been awkward?

This is a great question. I don’t know if it’s implied or not, but it seems courteous to ask, especially if you’re right in front of them. I’d have felt awkward not to. As for breaking character, I asked it of a guard in front of Downing Street and got the slightest, almost imperceptible nod. 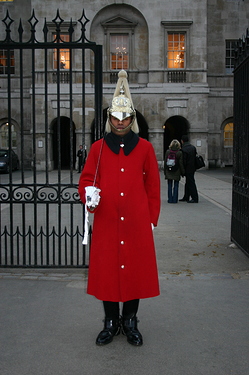 People probably appreciate the occasions where someone sees them as more than just the role they are performing. I know I would.

a guard in front of Downing Street

That’s not Downing Street. The prime minister gets regular police and undercover police. That’s a Life Guard from the Household Cavalry outside Horse Guards and they protect the monarch.

Horse Guards is on Whitehall. Downing Street is a side-street off Whitehall on the same side, but closer to the Palace of Westminster.

Its not OK to sexualize men just doing their jobs either. Women are the worst offenders at doing this (especially nurses) and any man subjected to a cackle of womens harassment about his looks knows what Im talking about. Do better, be less creepy.

What if this dude is on this forum, how would he feel if he saw your comments and his photo? Maybe just comment “this guy is cool, and the uniform is nice” next time.

This seems like an overreaction. You understand this whole post was in jest, right?
Do better, be less judgy.

Thanks for the correction. I was wandering around that day and took a couple of pictures of different guards. It makes sense that it was Horseguards because I was staying at the Thistle Horseguards at Whitehall, attending an international healthcare conference (I wouldn’t stay there on my own dime, er, pence)!

It was a fun stay- when we were in the bar a little light would come on that told the members of Parliament it was time to vote. If Americans drank more when Congress was taking a vote I’m sure there wouldn’t be such partisan bickering.

In that same bar, a visiting Scotsman in traditional dress showed me what was under his kilt, but that’s a story for another day.

Where is this fellow? I took it on the same day. 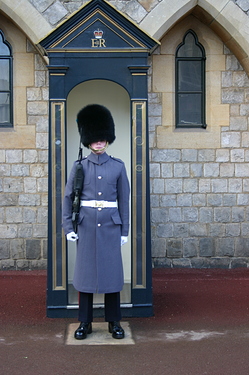 Also, I sadly fainted in one of the chambers (don’t know which department) at Whitehall. They desperately needed AC in that particular room. But I can tell you the women’s facilities are BEAUTIFUL, they literally took me to a fainting couch up there!

I have never been in a nicer bathroom in all my life.

What if this dude is on this forum, how would he feel if he saw your comments and his photo?

If so please DM @mousematt ASAP.

Where is this fellow? I took it on the same day.

Okay, thanks! None of my pictures are labeled, unfortunately. I have very few pictures from that particular trip, most of my time was spent in hospitals and surgeries and conference rooms. And the bar at the Thistle Royal Horseguards

I think the CMs who are performing a role or in a parade expect photos to be taken.

As for photos of guys with guns… well, when I was a young man visiting Rome I was utterly gobsmacked at the traffic flow.
How many lanes are there in a Roman intersection?
Apparently it’s not relevant. If your car kind of fits between the other ones, accelerate while honking stupido!
It was chaos and there were cars parked here, there, on the sidewalks.
Amidst all this was a pair of Carabinieri armed with submachineguns and totally ignoring everything, especially the traffic that would have given a Toronto cop conniptions.
Yeah. They were pretty chill alright.
Until I took their pic.

Then they wanted my ID and to confiscate my camera.
Turns out there’s a bit of a security concern about people identifying police and visiting them off-duty. Or their families.

I was surprised at the police presence in Rome.
The Swiss Guards seem to be quite used to people taking their pictures, though. I know their guns are loaded and all, but to be honest they are all about the age of my son. It wasn’t very hard to talk my way past them.

But that, too, is a story for another day.

Traveling with me can be an interesting prospect.

I almost always ask if I can take someone’s photo, unless I’m at a particular event with the purpose of getting candid photos (and usually I’m being paid to be the photographer of that event, so it is known that I’m walking around taking photos.) I’m often a staff photographer at local/small comic cons and I love it when I ask cosplayers if I can take a picture and they remain in character the whole time. I imagine cast members have similar spiels that they have prepared that they can answer you while still in character. BUT, I am also thinking that the above posts are true, that they are just used to having their photos taken. I would think of it more as courtesy than of ethics.

In that same bar, a visiting Scotsman in traditional dress showed me what was under his kilt, but that’s a story for another day.

But I can tell you the women’s facilities are BEAUTIFUL, they literally took me to a fainting couch up there!

I have never been in a nicer bathroom in all my life.

And the bar at the Thistle Royal Horseguards

I’ve never thought to ask permission for cast members, but I do take pictures of them so I have a photo for cast compliments. I figure a photo is probably more helpful than “Nathan from Rise of the Resistance”