Hello- We have Early Morning Magic booked on a CL 8 in February. We plan to rope drop thunder mountain from EMM…it looks like we might be at a disadvantage from the regular rope drop crowd in the hub. Any strategies to get over to BTM ASAP from Fantasy land? Also- do you think it would be possible to get both BTM and Pirates done and still make it back to Comic rays for breakfast by 9:45? Thanks for your help!

I’m not sure how many are in your party, however that’s almost doing a complete loop of the park.

The ride time on Btm and pirates is about 15 minutes total and it’s about 10 minutes walking from Btm to pirates to the cafe. That leaves you 20 minutes total wait time if you get to Btm right when they start letting people ride.

I’ve seen a TP video where the guys walked over to frontier land and it wasn’t blocked, however there are times where it may be which would impact your plan.

OK- thank you, this is helpful to hear. I was thinking it would be pushing it…we are a group of 8, including 2 grandparents over age 70 and 3 kids ages 5-6 so definitely not a fast moving group! Thanks again!

I just wanted to agree. Having been with a similar group of that size and composition, I advise making a plan that will be easier for you. We were pretty slow and someone always seemed to need the bathroom

Can you get FPP for those and rope drop something else closer by?

Thank you- I forgot to consider he frequent bathroom breaks

The BTMR fastpasses aren’t available until evening (and I dont think we will make it that long!)…but Pirates FP’s are still available for later in the morning. I think I’ll drop our Speedway FP for Pirates and then decide if we want to try BTMR or not. If not, I would think we could check off Dumbo and Speedway before 9:40, right?
Thanks again!

. I do want to say I’ve done EMM 3 times and have actually done this exact thing successfully all 3 times. Now my party was no larger than 6 people but you will be coming from fantasy land and it should put you ahead of the crowd and we always walked on the brown bridge around to BTMR. From there we headed over to Pirates and then ate breakfast and got to relax

Depending on that crowds there were times it wasn’t even too crowded at 10:15 when we had finished breakfast and we were able to knock out several rides and were done with MK by the 2 o’clock parade. We literally had nothing else to ride. We had plenty of time to locate a good spot for the parade and get back to the hotel to rest. I always set my FP for 9:20, 10:20, & 11:20 but wouldn’t tap into the first one until 10:15 when we left breakfast. I hope this gives you some hope. I did the early FP to add more when we used the first 3.

And my I do apologize for my terrible typo and grammar mistakes. I hope you can make out what I’m even trying to say. Smh. And to think I’m a teacher. YIKES.

When did you leave emm and what were the crowd levels?

Keep checking for BTMR FPP. You never know when you might get lucky, especially in the last couple weeks before your trip when people firm up their plans. I do think that you can do Dumbo & Speedway before 9:40, without a problem. I’d do speedway first since it’s so slow to load. Dumbo has a great play area to wait in. We went at 10am and there was barely a line; my kids actually weren’t ready to ride when we were called since they were having fun in the play area, so we stayed longer.

A variation of this question comes up from time to time. Here’s a recap of what worked for us on our several EMM experiences.

From FL during EMM, they’ll hold you at the area around Haunted Mansion until exactly 9 am when the ‘Let The Magic Begin’ fireworks go off. They’ll walk you to Frontierland, where you’ll join the regular rope droppers from the hub somewhere around the shooting gallery. Therefore, it’s not a huge advantage RDing from FL, but I’d definitely use that strategy rather than returning to the hub to RD.

It’ll be tough (to nearly impossible) to get BTMRR and PotC done before 10:00 and still make it back to Cosmic Rays for breakfast. If you stack your FPP early in the day though, you’ll be able to get it as a 4th FPP with fair ease.

TIP: They’ve opened security at 7:00 am our last 2 times. I’d try to get there around then, so you can get through security, get your wrist band, and be ready to get through the tapstiles as soon as they allow, so you can take full advantage of the 75 minutes that you get. The wrist band line can get long if you get there too close to 7:45.

We’ve done this once as well and rope dropped BTMRR and then Splash. There were only 2 of us but I am a horribly slow walker, so we were definitely in the thick of the rope drop crowd by the time we got up to BTMRR, but it was still only about a 10 minute wait and I think we walked onto Splash right afterwards. We weren’t trying to get back for breakfast though as we snagged something earlier in the morning.

When we plan on having breakfast after a rope drop, we typically rope drop Space Mountain and then Buzz since it’s closer and plan FPP for BTMRR and Splash.

I’m not sure what you mean by “when did you leave EMM?”

Feb 17, Crowd Level 10 this is the one we successfully did this for sure I have photos of us on 7DMT @ 8:49. We immediately got off and headed to RD BTMR… my mom who had no desire or was in no shape to do ride BTMR went ahead and took her time to walk to Pirates to meet us (I would recommend your grandparents do this ). I have pics of us on Pirates @ 9:31. From there we made it to Breakfast. They have to serve you as long as you are there by 10. And this was PRESIDENTS DAY WEEKEND!!! But the crowds didn’t pick up until after Lunch. We still actually had a very enjoyable morning. Met the characters at the big tent, (Daisy, Goofy, Donald, and Pluto), the princesses, did enchanted tales with Belle, rode space ranger spin, and I’m sure more. That’s just what I have photos to show. I can’t remember that far back. This day we for sure left early bc it got crowded but EMM wasn’t.

June 2 Crowd Level 5. We had an ABSOLUTE blast this day. My son was escorted around Main Street by Snow White on this magical day. 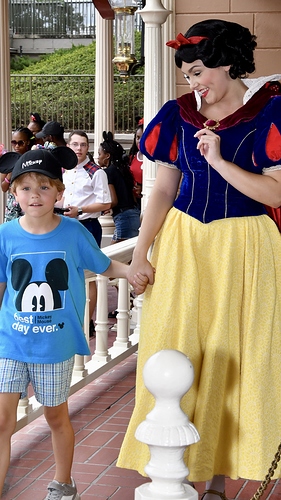 We just did EMM, RD BTM and then Pirates and then breakfast at Cosmic Ray’s this morning. People who can walk at a fast pace can do it. But having the grandparents meet you at Pirates or breakfast is the way to go.

Nice. What time did you leave fantasy land to do by btmr?

We didn’t quite make it to the rope from Fantasyland into Liberty Square before we heard the pyrotechnics from the welcome show go off. We walked fast enough to merge with the stream of regular rope droppers from the hub.

So we did this in July but we went to Splash instead of BT. There were CM’s that held us at Tangled restrooms. When it was time to start moving a CM from Haunted Mansion walked us past the paddlewheel boat-while CM’s held folks from the hub. Then once into the main part of Frontier-the stopped us and the mobbed formed behind us. Make sure you stay to the right but don’t use the side path. Some folks tried to use the side path along the water to get around the front of the mob but were blocked and get further behind in the mob. Right at about Pecos Bills it was everyman for themselves-you had a stream of folks come from Adventure-merging with Frontier.

don’t use the bridge that is closest to Splash. Use the pathway before that one.

I am confused- I agree with the pathway before Splash as that is the path that leads to BTMRR line but the path along the water is usually faster since it turns up to that path. How is it blocked at opening? I haven’t experienced that.

Sorry for the confusion- check out this video at the 6:45 mark. These folks are walking the side path near the water but they turn right on the main path I was speaking of…in the back ground you can see the splash mountain bridge. CM’s blocked the water path when we did it-wouldn’t let people go down it at rope drop;