TLDR; it’s a nice place to visit, but I wouldn’t want to live there. As opposed to WDW where I want to live.

About a year ago one of DHs cousin’s announced her engagement. Once we had specific dates, we decided that yes we would go and of course DL was included and no the kids weren’t coming. DH said many many times during planning that it’s a one and done, so the budget was kind of…… fluid. 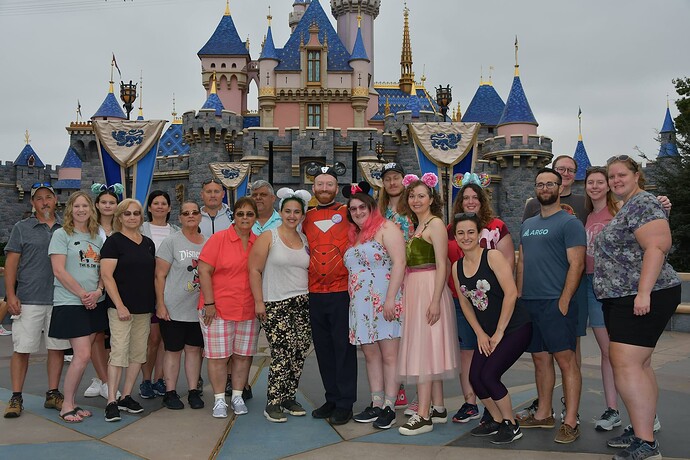 We went the four of us Monday and Wednesday. On Tuesday we met up with wedding guests. We gathered for the picture, then all scattered to the wind. All the way to the left is DH, me, MIL and Aunt in the front row.

I don’t remember and didn’t take notes so I am unable to recount each day in order from sunup to sundown, so I’ll do sections instead.

The Parks - adorable, crowded and a little confusing. We got lost more than once, which is not a surprise because I kept trying to leave the hotel at the wrong entrance for the park we were visiting. I think we’ve established in the past that I’m not the one to ask for directions. Ever. We never saw Toontown. Is it even open though? Many jokes were made at the expense of the castle’s size. While I tried really hard not to compare everything to WDW, it was nearly impossible not to. 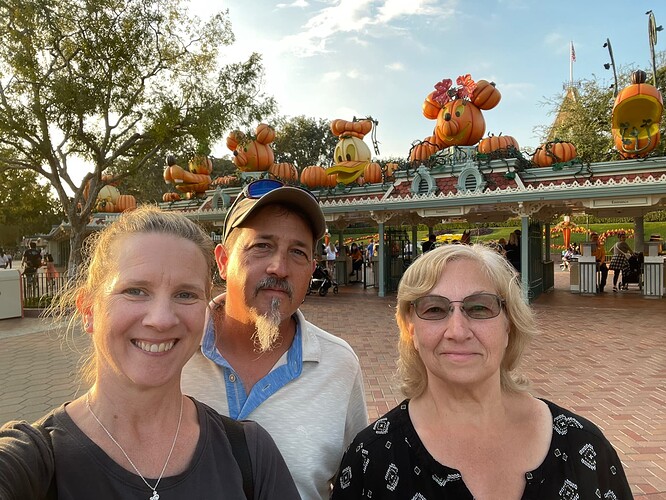 The Rides - I may be making it up, but overall they seem to be way longer in ride time than in WDW. Multiple times I thought it was almost, or should have been, over and it wasn’t. Examples are IASW and Incredicoaster. For Mission Breakout and Pirates I loved the extra time in the ride. The crowds were high and the lines were long. Lots of rides went down a lot. A lot a lot. We got G+ and the Golden Ticket is the only reason we got anything accomplished.

We rode/exprienced
Little Mermaid - cute and forgettable. Same as WDW? I think so.
Incredicoaster - WAY longer of a ride than I was anticipating. It was borderline too long. I started to get a little woozy towards the end and was wobbly. Great fun and I would do it again, but not more than once in a day.
Mission Breakout - SO fun! Again, felt a little longer than WDW TOT.
Soarin - Not B1
Radiator Springs Racers - lots of fun racing another car! Better experience than test track by a mile!
Mickeys Philharmagic - same as WDW. The new bit with Coco is cute.
the bakery tour - walkthrough. Interesting, smelled great.
Jungle Cruise - same as WDW, but this is where Cousin and new husband got engaged ( at the backside of water) so it was fun to do with them and hear/relive the story.
Indiana Jones - oh my! Ok, so we got stuck. Lights on, guardrails up stuck. When they announced that an adventurer would be along soon to assist us, I thought for sure we were getting evac’d. The CM walked past us and picked something up off the ground near the vehicle ahead of us. We made it through the rest of the ride with the lights on and no sound effects, but full car bounciness. When we pulled into the disembark station, they had us unbuckle, hold our seatbelts up then buckle in again - they let us stay on for another ride. Super fun! This time it went mostly according to plan, with a couple small hiccups. All told I think we were in line/on ride for more than an hour.
Pirates - LOVE. All the hype is true.
Haunted Mansion w/ NBC overlay - oh my gosh, so fun! I wished WDW did it too because it’s brilliant.
Pooh - same as WDW
Mr Toad - seriously WTactualF?
Storybook Land - adorable.
Buzz Lightyear - MIL and I shared a car and DH rode alone ahead of us. I got like 30,000. More than MIL, and when I looked over at DHs score I blew him away. He had like 13,000. I gloated for all of 2 minutes before he corrected me that he had like 613,000. Whatever.
Nemo - not sure. My eyes were closed the whole time. Looking out a porthole while we “drove” sideways was a recipe for disaster. I hear it was cute.

I was bummed that we didn’t get to do Web Slingers and a variety of classic dark rides in DL. Web Slingers went down and the lines for the other rides were too long to bother waiting on. We also didn’t do any nighttime shows/ fireworks. The DL fireworks ran the first night, but we were beat by the time we were done with dinner and didn’t feel like fighting the crowds.

Hotel - the studios were nicely appointed DVC deluxe studios. The 2 bdrm though? It’s in a race with Riviera as my favorite across property. Three bathrooms, a ton of space, the dining table was humongous. I remembered hearing about a patio area on an upper floor that overlooked CA. We went on an adventure to find it and weren’t disappointed. Such an amazing view! 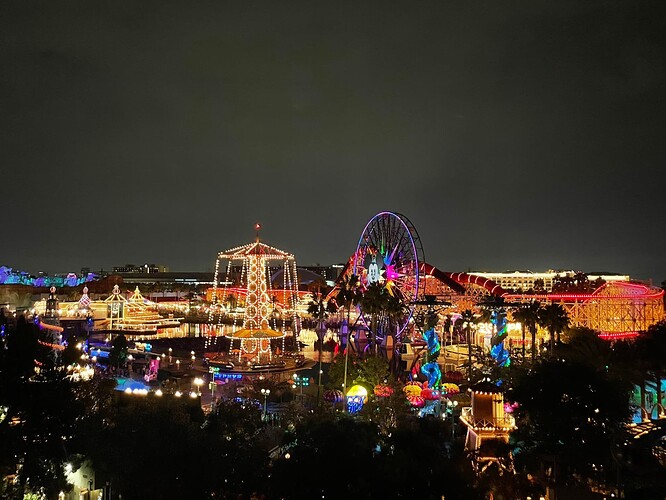 Food - this was really where the wheels fell off. I have two allergies (gluten & dairy) and DL is not multi-allergy friendly. I was only able to talk to a chef once, at a quick serve. Other times I was basically just told no. I was expecting it, but DH was pretty pissed. Napa Rose was lovely and worth every penny. My other favorite was the chicken and asparagus and vegi skewers at the QS near Indy. We got them twice. Oh and the mint julep is divine! DH and MIL got the pumpkin beignets and enjoyed them.

Transportation - we had a rental car for the wedding from Budget that we returned when we arrived on property. We dropped of MIL and Aunt at the hotel, then took the car back. It was a short walk back to the hotel. I never did get around to changing the return airport transportation from Karmel to someone else, but it ended up being fine. Nice driver, stayed around the speed limit. It’s funny, California. Everything is kind of slow and chill until people get on the highway. When we had the rental it was psycho driving through LA. I thought driving on the LIE was living life loose and fast. We’ve got nothing on LA drivers and their 6 lanes traveling at 80+ mph.

Overall, I’m really glad we went. I wouldn’t choose DL over WDW though. On the way to Aulani? For sure a stop will be required. But for us it’s not a destination unto itself.

That group picture is amazing!!

Brilliant right? The first time my kids rode it they looked at me and said “Mom did that ride just take us to hell?”

Napa Rose was lovely and worth every penny.

Overall, I’m really glad we went. I wouldn’t choose DL over WDW though. On the way to Aulani? For sure a stop will be required. But for us it’s not a destination unto itself.

Our family found we liked it better than WDW. How nice we can try varieties and pick our favorites.

You seem to describe the rides favorably though.

I’m sorry about the allergies. That is the worst.

Looks like you had a great time! I hope those maps came in handy!

I like your descriptions of the rides and generally agree with your assessments. It’s too bad you missed out on entertainment - DL puts a lot into those nighttime shows, although maybe not quite as extravagant as MK or Epcot shows.

I get what you’re saying about wanting to live at WDW — there is so much to do there, and it’s so epic! But Disneyland still has my heart and is more charming, IMO. I’m glad I don’t have to choose one or the other. DL is my more frequent park since it’s closer and it can help tide me over between WDW trips.

Right?! The photo pass photographer took it in 4 different images, then the groom stitched them together.

I’m sorry about the allergies. That is the worst.

We definitely had an overall favorable experience, food allergies aside for me. I don’t know if my hyped expectations clouded my experience, but I don’t see a “need” to go back.

For sure!! We would have been even more lost if we hadn’t gone through them before we arrived.