I don’t see the option to create a touring plan using a pass for early morning magic at MK. 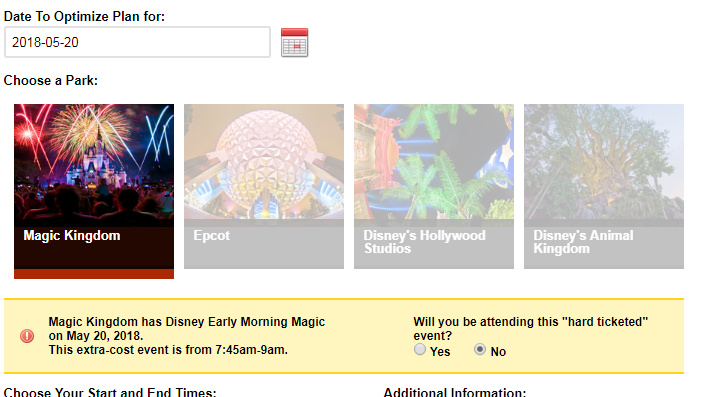 Are you creating your plan for a day where the EMM is offered?

Yea, at first I was trying this on the computer rather than a phone. Now I see the option, however it doesn’t really take the fact that I have it into account when optimizing. It also doesn’t seem very easy to move rides around on the list to change the order. Using the optimizer, it has us running from Adventureland to Tomorrowland and back. I guess this takes a lot more time to make than I thought.

I always choose minimize walking so that they don’t take me all over the park. I’ve also heard that people continue to optimize until all the little glitches go away. Personally, I drag and drop things in the order I would like to do them, and evaluate. It works for me because we don’t have a lot of rides planned. May not work for those that are trying to minimize waiting.

I would just start the plan at the end of EMM. You don’t need a plan to ride 3 rides!

Maybe add a break at the start of the plan, so it knows where you’ll be. And you can add breakfast at 9:45 or whatever time you plan to go.

Yea adding the breakfast at 8:50 works great! I was able to make a plan for my wife and daughter and me and our two boys that synced up perfectly for the rides we’ll be spliting up for. Having a 6 and 4 year old is tricky for Tomorrowland speedway. I guess the only viable solution is to do rider swap or attempt to run the boys back to their mother for each one. I thought it would work fine until they decided they wanted to do the haunted mansion. No we’ll be running from the haunted mansion to Tomorrowland to get buzz in before the rush.Safari - May 20, 2018 at 10:01 PM.pdf (604.4 KB)

You do know you have until 10 to have breakfast, don’t you?

What a lot of people do, is do Fantasyland until 9 when the rope drop crowd arrive, and then head round to either Frontierland or Tomorrowland to get in two or three rides, and then head back for breakfast around 9:40.

That would give you time to say, go to HM and Small World, maybe even Under the Sea before breakfast. Or Buzz and Speedway, especially if you’re needing to do Speedway twice for the boys. Go to Speedway first, and decide if you have time to do Buzz or head back if you’re running short on time. Aim for breakfast at 9:40 to give yourself time for slight delays.