March 29 is still selectable on the Disney Website for the EMM event: 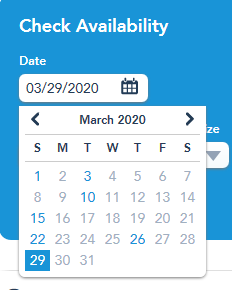 Sometimes I find the technology baffling - like it shows in the hours calendar and then it’s gone. But you’re right I do still see it as a bookable date on the EMM webpage.

For me both WDW / DLR sites were down a good chunk of last night. (I assumed they were doing an update) So… you may have caught it in between those times.

There are issues with EMM right now. I’ve been trying to book for January 2020. The date shows up, but returns no reservations when you search. It can’t be sold out. I tried several dates. Same result.

I saw a few other posts about it in the last week or two. Most people assume it is a glitch, but don’t know for sure. It may have to do with Rise of the Resistance and possible decisions being made by Disney right now (i.e. are they going to do the EEMH again after Rise of the Resistance, which would eliminate EMM for those dates).

I was able to book EMM for a date in March and have anchored my plans on it. Hoping they don’t back it out, subsequently causing me to replan.

I’m hoping it’s not cancelled too because we’re going during spring break and it will be super busy so I was hoping to knock out a lot of the Fantasyland rides during EMM. Just looks weird that all of the January - March dates are booked and it disappeared from the hours calendar.

Tickets were available at one point, so I can’t imagine Disney would’ve released them just to back-track on it. The dates were also a bit different than the standard schedule, so some thought obviously went into the calendar.

But it’s also very unlikely that two months of EMM dates sold out in 48 hours!

Hopefully it’s all just a technical glitch and tickets will be available again soon. (I mean, the omission of PP led everyone to believe it was deliberately eliminated, but now it’s back on the list. So who knows!?)