Thanks for earlier help for MK. Next question:

I will be staying at Coronado Springs and going to HS on January 30th. What is the best way to get to HS to ensure that I am there for early entry? I will have a car, but I’m not insistent on using it. I’m okay with taking Uber/Lyft if that makes sense.

The Touring Plan book suggests self parking at Swan and Dolphin, then walking. But maybe it is best to Uber/Lyft and get dropped off? Are these ideas any good, or what do you think is best?

Since you are at a Disney resort I would suggest just taking the bus. Get to the bus stop early around 7:00 to try to get one of the first buses there. When we were there in December, HS was the only park where they were letting people in earlier than the advertised time so I would aim to be there before 8:00 to be at the front of the pack. Maybe someone there more recently can confirm if this is still true? As far as driving, Im not sure but am curious what time they are letting cars in nowadays.

If you are looking to be at the very front of the pack, an uber/lyft may be the right choice. There were people in line before the first bus arrives.

From there you would then line up at the turnstiles until they decided to let everyone in. 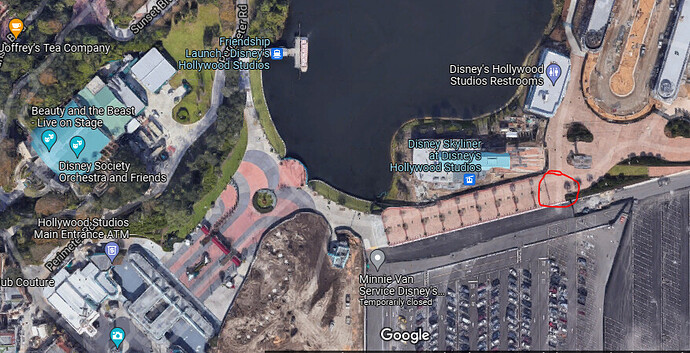 I will have a car

I think if you have a car and don’t mind walking the parking lot, that’s the best way to control your timing. It’s a quick drive from Coronado to HS.

We did this at AK in January and we’re just a few people back. Personally, I prefer driving when I can, but I know that parking lot walk is not for everyone.

Good luck with whatever route you take!

Yep if you take the first bus, you’ll be at the front of the pack, except for walkers from Crescent Lake resorts.

The GDT stop is the last stop before busses head to the parks, and I haven’t seen any reports in the daily check ins over on Touring Plan’s WDW Chat that the first busses have been full.

Scroll down to WDW Chat under WDW Planning Tools.

Does anyone have more up-to-date information here? Wondering a couple of things:

Currently early entry is at 8 with park opening at 8:30. According to the spreadsheet the most recent bus pick up at AKL Jambo was at 6:37. The rule of thumb is the bus arrives 90 minutes before early entry. I think you will be fine if you head to ToT and RnRC first.

Thank you @simba77 and @MrsHurls for your replies!!!