I have a question which has been puzzling me.

Does that mean we have 2 separate slots to build a droid, and therefore liable for two charges, or just one slot?

Each reservation allows two people to participate in a SINGLE droid build. So, for example, parent and child, etc.

One builder and one observer.

it’s the same for Savi’s btw. Everyone else has to wait. For Droid Depot that’s no big deal because it’s inside the store and other members of your party can just hang out on the other side of the bar and still watch.

Hmm… I reserved a spot for my dd10, but was thinking I only needed to put her on the res since we’re only building the one droid. But either my husband or I will accompany her.
Should I have made the reservation for 2? Or is it implied that there will be a guest with a child?

Just as well I came to the conclusion that I didn’t need a droid myself!

I thought made a reservation for my two sons to build droids, so you’re saying that since there’s only one reservation number, that means a single droid?

you’re saying that since there’s only one reservation number, that means a single droid?

Yes. One droid per reservation, and only TWO PEOPLE are allowed in at a time. So if your two sons go in, no one else can go in with them. (Depending on their age, I’m not even sure that would be allowed.) When my DS10 built his droid, I was the one who went in with him. They wouldn’t have allowed anyone else. The working area is too small. 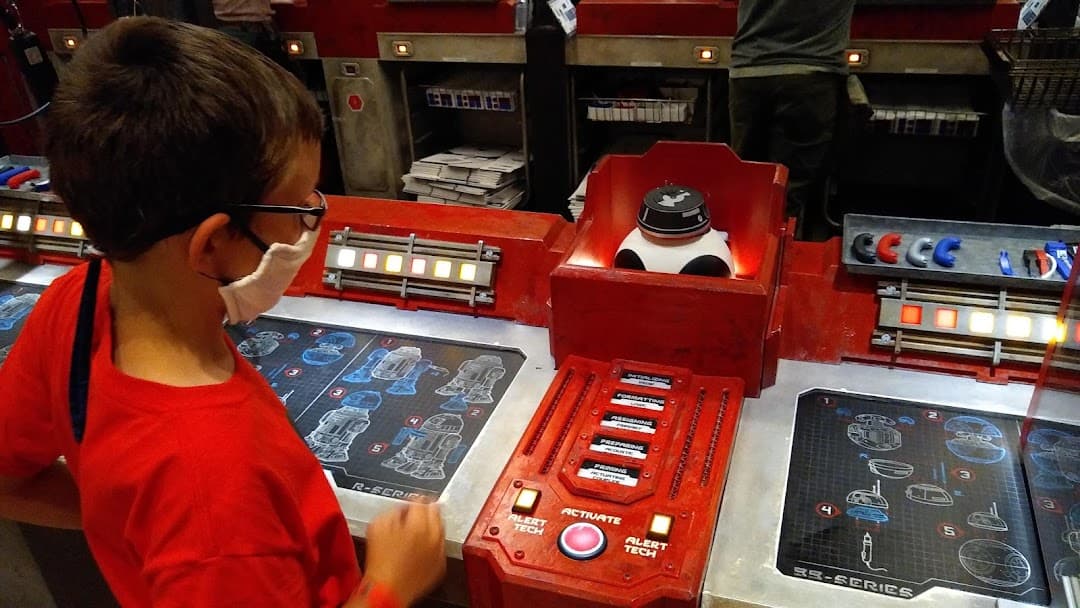 So I just went to the booking page again to look at making another reservation, and you punch in the date and then it asks for “number of builders”. 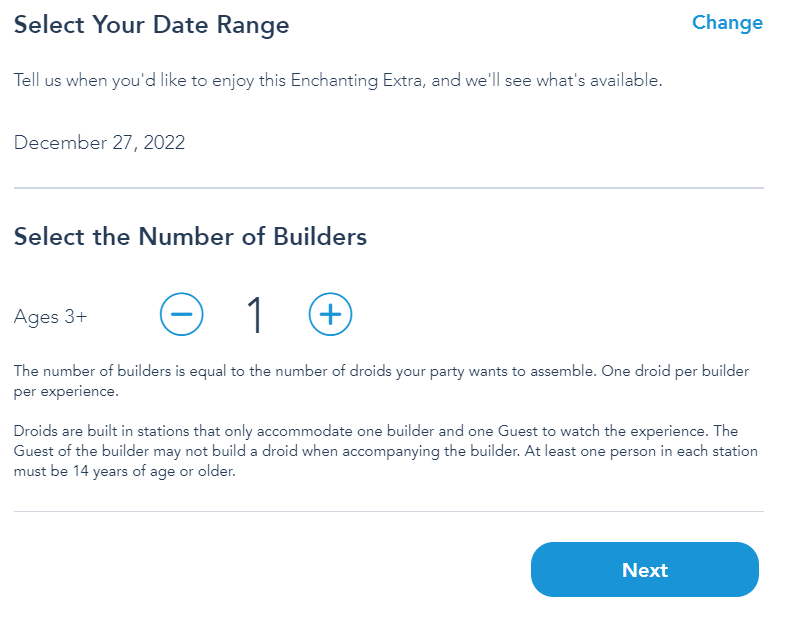 It has been a minute (2020) since we did it, so I don’t recall if it offered having more than a single builder at a time. But it appears like a short cut to having two reservations. Perhaps this is to allow a single parent to accompany two children who each want to build a droid?

So, if you book TWO builders, that means two droids. It also means you can have a SECOND “guest” (watcher) for EACH of the builds, such as one parent watching each builder, etc.

ETA: Actually, the note about “at least one person in each station must be 14” precludes a single parent accompanying two children (unless one of those children is over 14).

Yeah, regardless I can’t book a second reservation since the time slots have mostly disappeared, so I’ll just have to hope for leniency from the CM if things aren’t as I expected.

Actually, the note about “at least one person in each station must be 14” precludes a single parent accompanying two children

Also just noticed this fine print – of course I’ve already booked my wife a lightsaber reservation at the same time. I can’t see how it would be a problem for a single parent if the stations are as close together as they appear in your photo, but again I’m gonna have to be pleading ignorance and hoping for the best.

I’m gonna have to be pleading ignorance and hoping for the best.

Yeah. I can see the written rule and the “enforcement” of the rule to be two different things. For example, what would an ACTUAL single parent (meaning, there is no second adult/father/mother around) do when they have two kids? It will probably be okay, as long as they can find two stations next to one another.

And the alternative would be I guess to just abandon the second kid somewhere since I’d have to accompany the first one in building a droid.

I’m not super concerned, but I’m glad I just went through this exercise to know what I could possibly expect. Thanks.

Even if you have just one reservation and both kids want to build, I’m pretty sure they will accomodate both when you check in and pay. It’s been a couple of years since I went, but I had only made one booking and all 4 of us (2 kids, 2 adults) went and built two droids, I just let them know when checking in that there’ll be two builds and it was no problem.

Also quite certain they will allow 3 people if it’s one adult and two smaller kids. like Ryan said, if you’d be solo with two kids there’d be no other way.

This was all before covid so I don’t know if they got more strict in enforcing the rules (back then no one seemed to care much as long as you had paid), but I still think you’ll be fine either way.

I highly doubt they will care if there is one parent or two. They might put the builders on opposite sides of the building area but I have always (and I’ve done this three times now) stood way far back anyway. But my kids are over 14. Only the first time did I have one under 14 and she did it alone why brother did Savi’s with dad.

If they do care, they are pretty lenient on time, just have one kid go and then the other and arrive early so both of 'em are there at the right time or early. The other kid can stand just on the other side of the bars and still be right next to you if you hang back. The only thing separating the building area from the store is a line divider bar like you see in attraction lines:
similar to this: 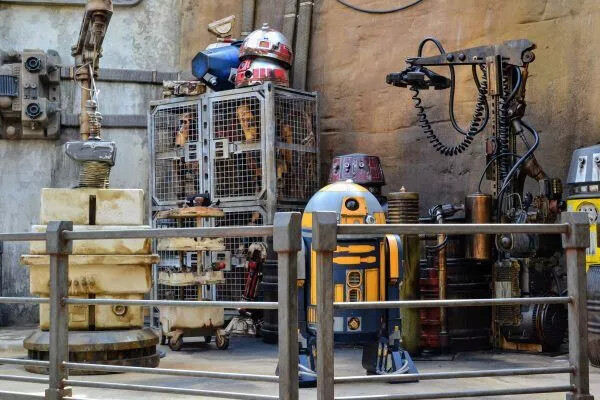 May 2021 we built droids, I went with my BFF - me with my 2 kids and she took her 8yo so 3 kids between the 2 of us, each building droids. No pushback at all about the ratio of parents and kids. I had selected 2 builders for my appt. but I think even if I had only picked 1, I could have had both kids build. They verified the appt outside, and then you go inside and pay. It’s been a while but I don’t think they relook you up inside at the cashier you just have each kid pick out a package and pay. It’s small in there so you will have no problem supervising 2 kids at once, you just stand between/behind them at the parts conveyer and then same for when they assemble and activate. That’s what we did.

As a point of reference, I just made a reservation yesterday, and there’s only one name on it. It specifically said there could also be a guest who does not build a droid. I think if your reservation has two names on it, you must have booked for two droids.