Done. Thanks for the advice

I think I gave the wrong link… fixed now. Thanks!

What a good friend you are!! I’m sure they appreciate all of the help you are giving them. Are they interested in any of the trails? We spent a lot of time just wandering the MJT, GFT and Discovery Island trails. Lots to see and if the 5 y/o is interested in playing Wilderness Explorers there are tons of badges along the trails. Also, would they be interested in the new animation experience since they will already be taking the train to Rafiki’s? My 5 y/o really enjoyed this experience in July.

Maybe you can fit in The Boneyard in the evening after their break? What about the Nemo show? We all love that one too!

It looks like a great plan to me. But depending on the DD5, “Its Tough to Be a Bug” might be a little scary - i know my son hated it when he was 7 - the poke scared him and he didn’t like all of the smoke.

I think I will suggest Discover Trails in the morning. That will let them explore that area, with the Tree of Life, on their way to Mickey & Friends.

I haven’t put a lot of trails in their plan because we live in a city with one of the top 10 zoos in the country. (some polls have it at Top 5) I know it’s not a popular opinion here, but I don’t visit those trails because I can see all of those animals and more at home. (Plus, the safari is a more fun way, IMHO, to see animals at AK)

I also saw, thanks to your idea, that I can suggest if they return 20 minutes early they could make the Nemo Show. I’ll leave that option for them in the notes.

“Its Tough to Be a Bug” might be a little scary

Yeah… I had that debate when I put it in there. I have warned my friend and see thinks it’ll be ok. (Or at least be prepared for it.)

OK… I think I’ve got it all worked out now.

If anyone has more ideas, feel free to chime in. However, I think the TP is good now.

You may want to warn them about the Carnival games if they’re headed into DinoLand (that they cost money and to avoid a child meltdown) - I think kids also enjoy that little playground area in there (Fossil Zone?)

Two things you could consider:

It’s funny how different people love different things. Our local zoo is a Top 5 zoo and I love the trails at AK but more for the relaxed pace and overall atmosphere than the “oh!! Animals I can’t see at home!” aspect.

I really wanted to, but it came down to this or Festival of the Lion King. I chose the show.

Thanks for the input!! 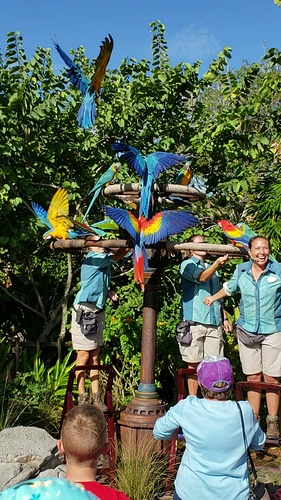 My DD is a big Wilderness Explorer fan.

We also liked the Up show. The show itself was corny, but the animals were good.

Finding Nemo show we enjoyed a lot. Not as much as FOTLK, but still worth it to us.

Anyhow, you might swap out some other thing(s) to fit in Nemo.

This looks great, and you are an amazing friend for doing and putting in so much thought.

I too am going to suggest Wilderness Explorers as an option. Our twins were 5 (almost 6) when we did Animal Kingdom for the first time. They really loved it, and we spent the entire day getting badges, while also hitting the attractions we wanted to hit. This was pre-Pandora, and we did not do EE or KRR. So we did limited attractions, yet WE kept us busy (in a good way) the whole day.

The great part about WE for first timers to Animal Kingdom is that while our kids hunted for the next WE badge, we adults could take it all in. However, if your friends do WE, it could also blow up the day and wreck your well thought out TP.

(EDIT: You can’t really expect us to “ignore” right?

So more for others, who may be following.

Although we too have been to several zoos, one thing I had never seen before was the underwater viewing of the hippos swimming. I find that so mesmerising that I couldn’t bear not to walk that trail at least as far as that.

And as a theming lover, the theming on the Maharajah Trek is simply stunning. Not sure if they took anything from actual Indian temples, or even The Jungle Book, but I love the feel of walking through the jungle past the ruins.

And another vote for Wilderness Explorers. The CMs are very good at adapting their answers to different age groups, even 3&4 year olds.

the underwater viewing of the hippos swimming

Theming on the Maharajah Trek is simply stunning. Not sure if they took anything from actual Indian temples, or even The Jungle Book, but I love the feel of walking through the jungle past the ruins.

You should come to Memphis! We have all that here too - including the cool temples & such in their in the habitats. I really am spoiled by it. The animals have so much space and well themed areas. I have an AP to our zoo and try to get out there at least once per month - even more once the heat isn’t 100+ as soon as the sun rises!