Due to the State of California’s plans not to issue theme park reopening guidelines until next month, today the Disneyland Resort announced it would need to postpone the proposed reopenings of Disneyland and Disney California Adventure. What’s... 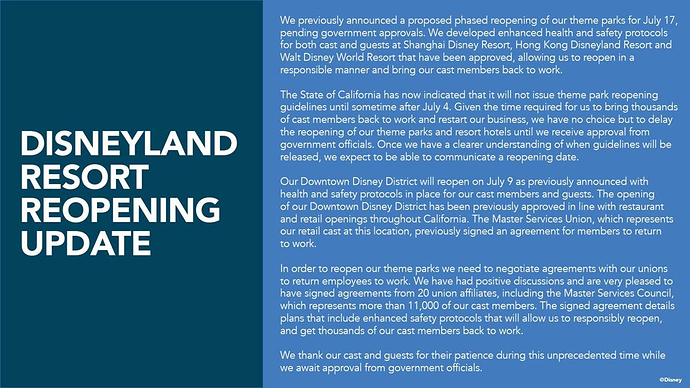 I’ve been waiting for this but it’s still sad. Hopefully they open by the end of August when I have a trip planned. I’m pretty sure they will, but who knows.

We will be in California just prior to August 25 (day we drop DD20 at college) and hoped to use our already purchased tickets.

It’s probably the smart thing for California to do, but I’m really sad right now.

I’ve been thinking all week that this was one of those times when no news wasn’t good news!

This week has been exceptionally hard at home, the worst of which is my not even 3 year old dog having a medical crisis that is still not resolved, plus a whole lot of other issues I won’t bore you with. Now this. It’s just another layer of this sh&@ sandwich that is 2020. I am so sad. We were supposed to go at the end of July.

Were you one of the ones that had a WDW trip planned as well to choose between?

Yes. But I have some reservations about whether going there is a smart decision. Plus the weather. And the high cost. I have to think about it a bit and figure out what to do.

Sorry things are tough at the moment. Hope your pup gets well soon.

Thank you. Hoping for some answers today.

Hope your doggo is okay! Just as I was reading this post last night, my friend called on her way to the emergency vet with her 13 year old dog. She thought the dog had had a stroke. Turns out it’s probably vertigo! Or the doggie equivalent. It does feel like 2020 is slapping us in the face over and over and over again. And this week has been particularly tough …

I hope your dog recovers quickly.

Thanks! It turns out he has Addison’s Disease which presented as no interest in food and declining interest in water. At first the Vet thought he had a mouth infection. Then it became clear that was not the issue. He spent most of Tuesday there with an IV, then came home for the night while we waited on labs. I took him back yesterday morning and he was circling the drain. Another IV and when his bloodwork came back his labs were all out of whack. Then they started to suspect Addisons, so another test and then they gave him steroids, which perked him up a little. They sent him home overnight with his IV still in place. He actually left in alone. He finally drank water and ate a small amount. This morning he ate a tiny bit, and they just called with the news about Addison’s. He will have to take a steroid every day of his life plus have an injection every 28 days. The daily steroid is pretty cheap, but the monthly injection med is $244 a month, and that is with me giving it so as to avoid a fee for them giving it. I am in shock about the price, but he cannot live without it. He turns 3 on the 4th of July. I have to take him back over to get his meds in a little while. My husband is going to flip his lid when he finds out how much the meds are.

That’s awful about the med price… There’s no excuse for that except greed. My heart goes out to y’all.

There’s no excuse for that except greed

Exactly. The same thing has happened with insulin. The vet said I might be able to find it cheaper online, so will look into that later. He is getting an injection today, so at least we have 28 days to find it.

So sorry. Pets can get expensive. We found out last month Kathryn’s dog (who is 15) is in renal failure. She is now on daily medication and special food and will have to be admitted periodically for IVFs. My DH wasn’t too happy about the cost.

Sorry about Kathryn’s dog, I hope she continues to do okay.

Thanks. We really don’t know her life expectancy at this point.

Looks like Disney has come to agreement with at least a couple of the unions representing Disneyland CM’s, but not all.

Disneyland and Unions Agree on Reopening Protocol | Inside the Magic