Anyone else get a survey request about Disney+ recently? 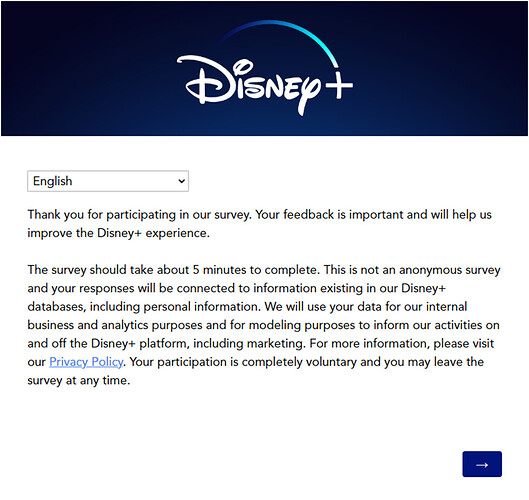 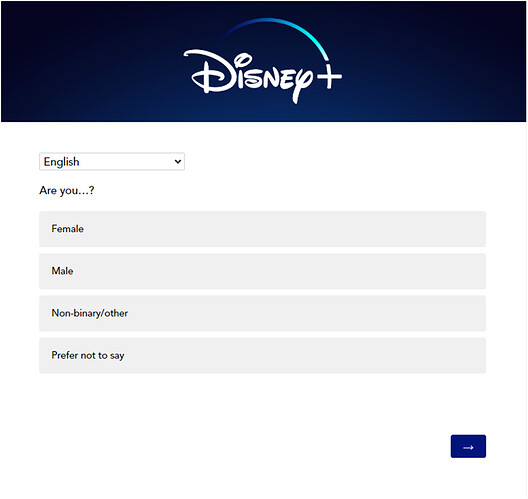 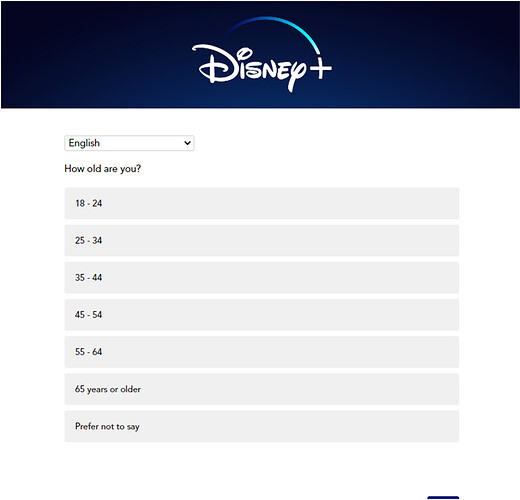 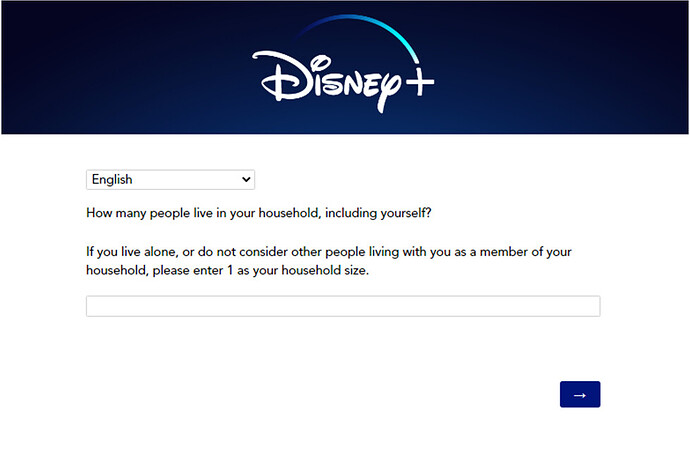 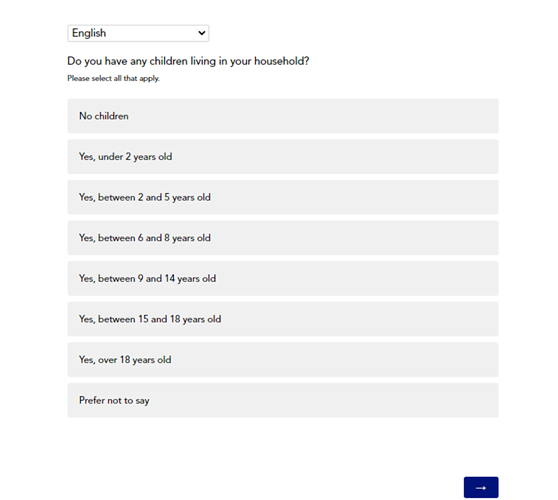 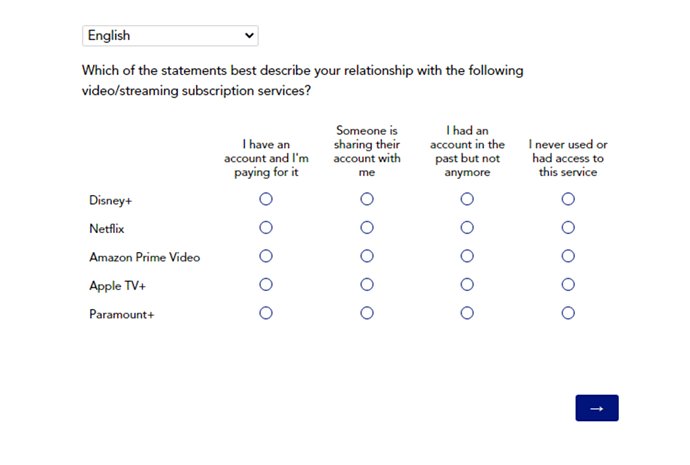 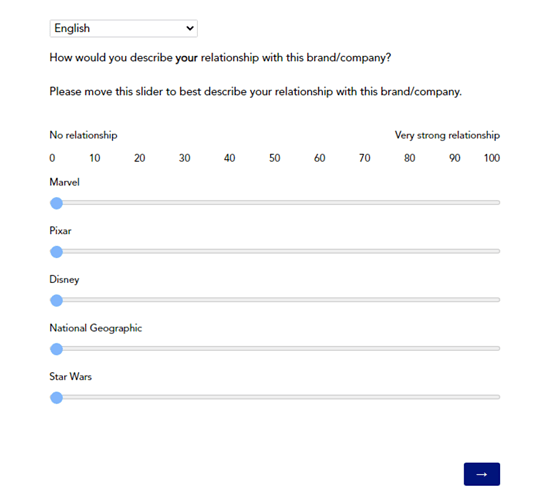 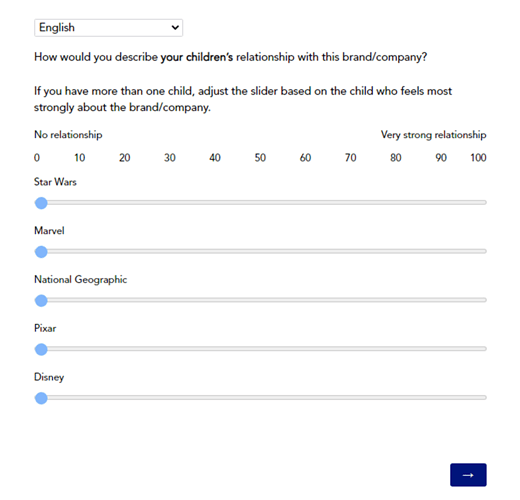 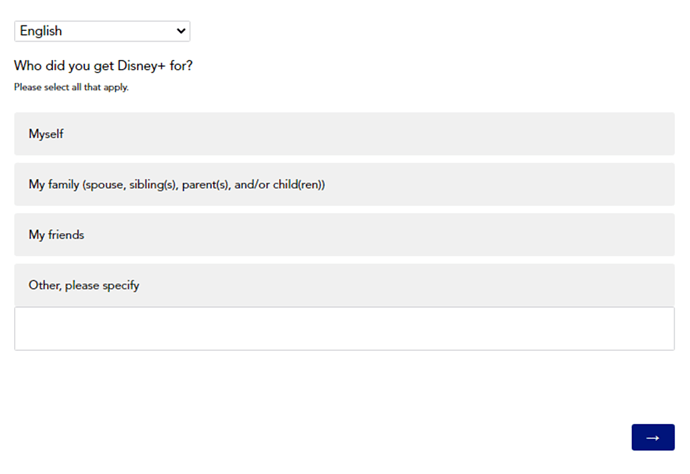 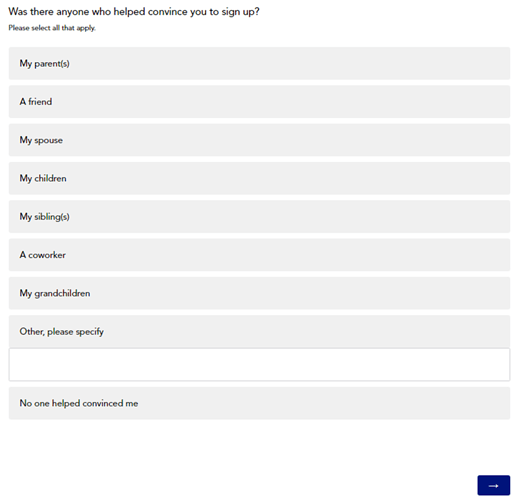 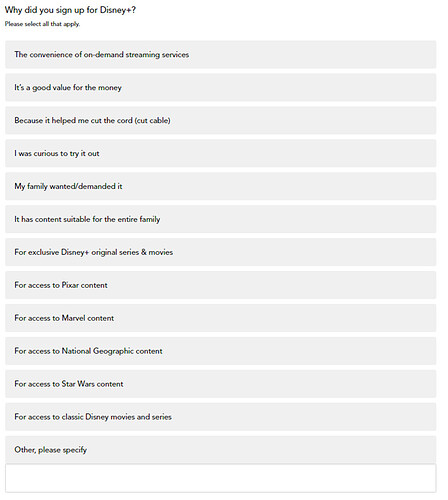 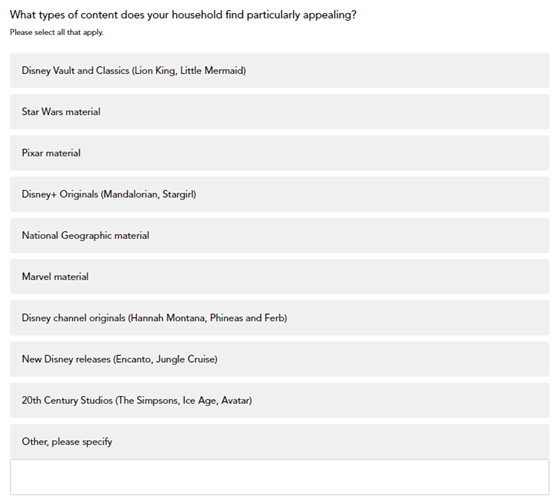 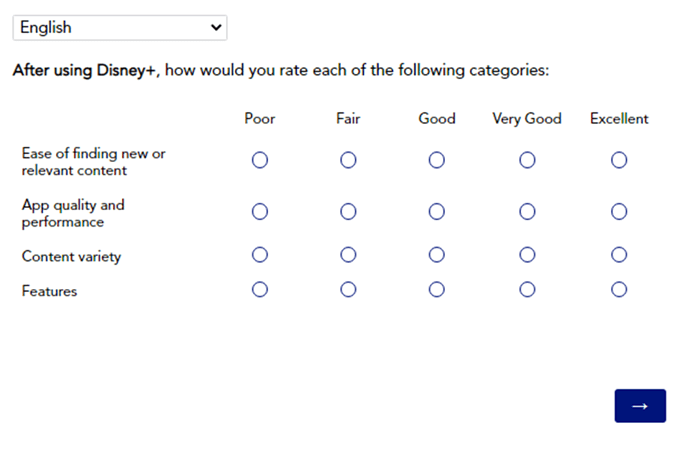 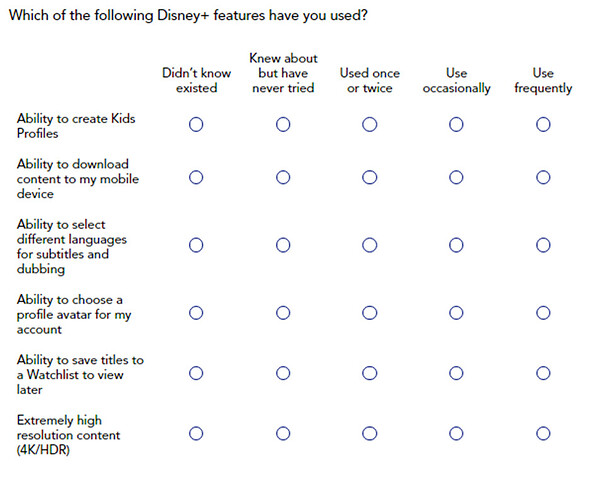 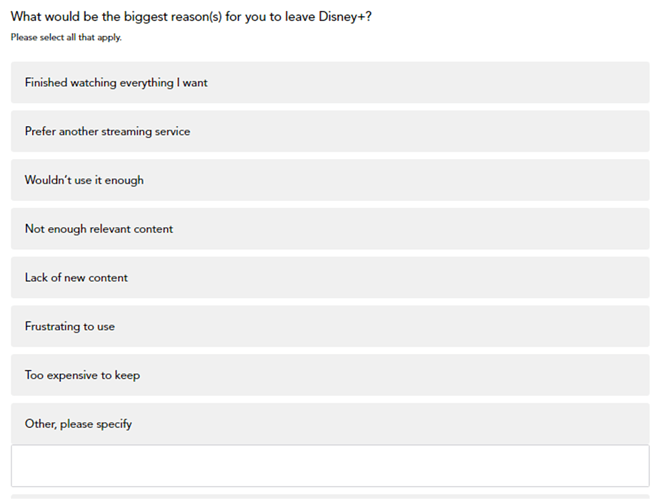 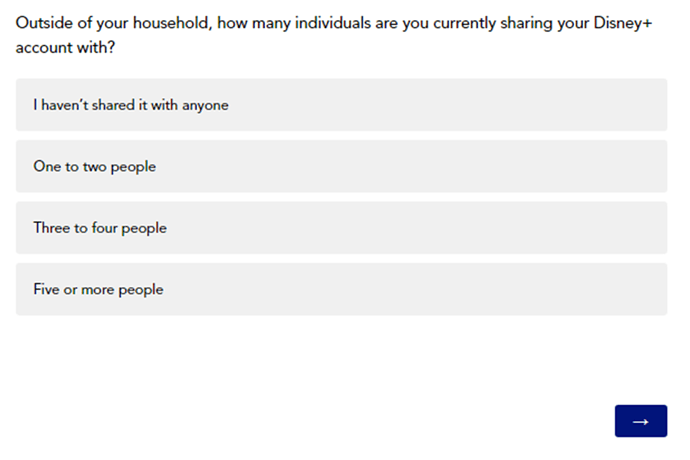 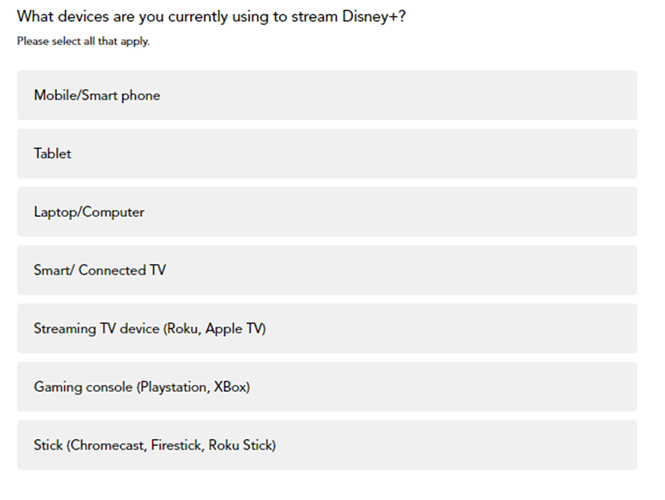 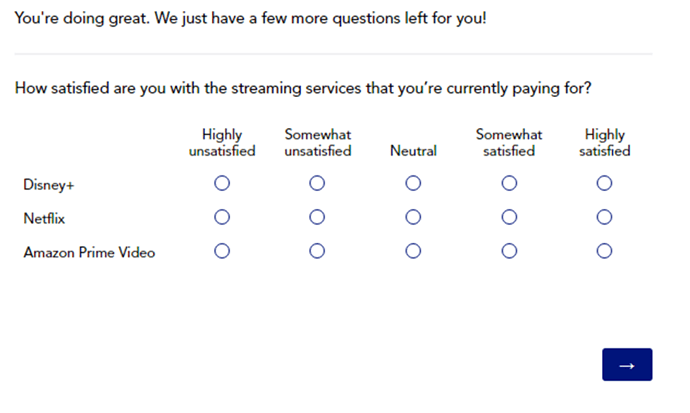 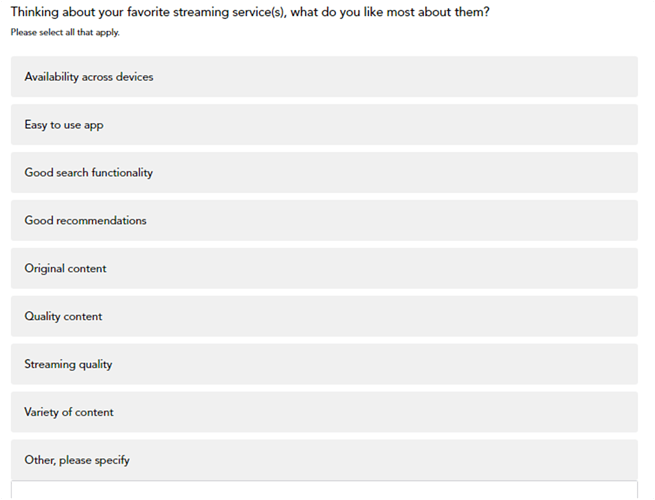 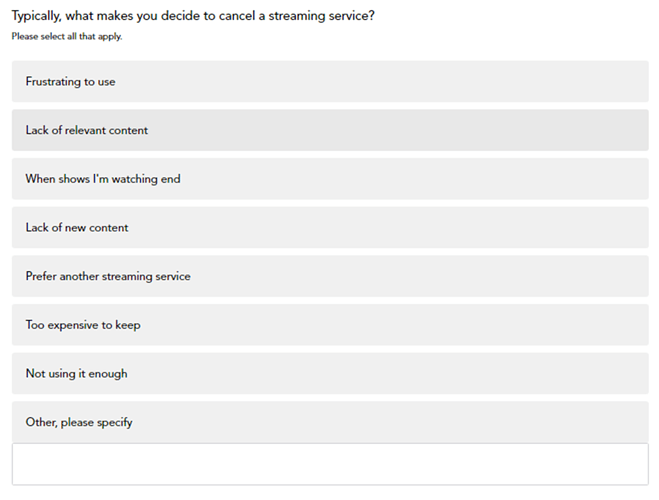 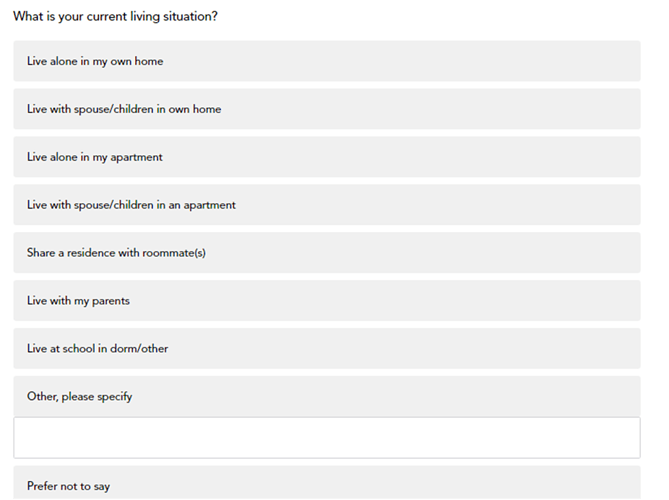 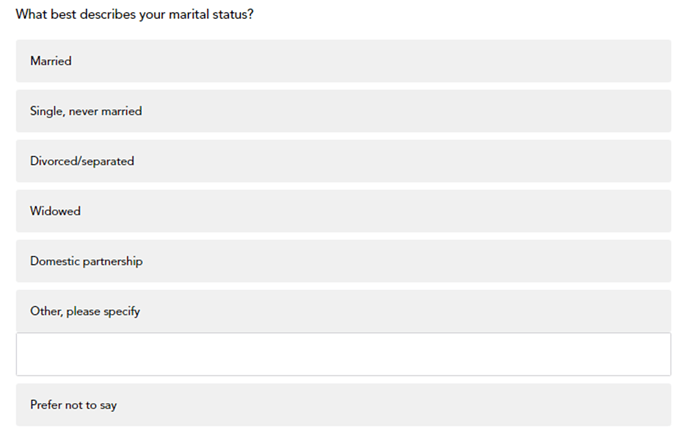 Would you answer all the questions that do not seem relevant to Disney+?

Yes…because that allows them to do a better job of targeting the results if the survey…they might see patterns in their business model impacted by things such as socioeconomic status, etc.

This might not seem relevant to you, personally, but it is for those conducting the survey.

It isn’t meant to pry into one’s personal affairs!

I understand they have reasoning for asking those personal questions. And I also understand that they are looking for additional data to help categorize the responses and get more focused on the questions they are really trying to answer but are not directly asking.

I asked the initial set of questions to get other perspectives form liners and open it up for discussion.

How many households are you sharing your Disney+ account with? LOL

This one seems to be a response to the initiative Netflix is going through right now where they are trying to tighten down on the sharing of accounts. Do you think Netflix has stalled in their subscription adoptions and are looking for ways to continue the madness of year-over-year growth?

I’ve not been sent this survey.

(if it’s from a trusted source that I am happy to share information with).

It’s odd that they put the demographic questions first. Most surveys put them last.

Surveys that do this either (1) want to verify demographic information you input when you initially signed up for the service or (2) weed you out of additional questions based on what you answer. The OP likely gave the right combo of answers, therefore qualifying them for all of the proceeding questions.

No I would not answer the survey because it states it is not an anonymous survey.

They are using the survey to make more money. My time is valuable and I want to be compensated for it. Give me a token of appreciation for my time and I would consider answering your survey, but still probably not because it is not anonymous.

No I would not answer the survey because it states it is not an anonymous survey.

I missed this the first time I read through the survey. I would absolutely NOT answer it; the last thing I want is more targeted advertising. The fact that Disney already has every resort I’ve stayed in, every non-cash purchase I’ve made, every ride that I’ve been on, not to mention what credit cards I’ve used stored away in a master database somewhere is bad enough. I’m not going to give them this too.

We received a survey via snail mail recently from the Nielsen company. Enclosed with the survey was two crisp one dollar bills. If we sent it back they would send an additional five dollars. We sent it back and they sent ten dollars instead of five. That’s the way to do it!

To answer your question, yes I would answer. I’m the type who appreciates being asked. Got my first poll (voting) questions recently as well. And now I can’t say I’ve never been polled.

LOL. My poor mom was certain they’d sent her counterfeit money. (Nielsen). It took everything I had to convince her.

That’s the way to do it!

It is kind of a way to guilt you into doing it…speaking to a sense of ethics inside everyone. If you don’t fill it out, you might feel guilty for keeping the money. So, more people are willing to fill it out because they were “pre-paid”. The promise of additional money serves as secondary incentive.

The bad part of that is it does bias the survey a bit in the type of people who might respond. But, all surveys suffer from that…bias based on the type of people most likely to respond. Those with very poor or very positive experiences would be more inclined to respond, for example, than those who have no sway one way or the other

Nielsen ended up sending my husband and I one kit each to record what radio stations we listened to for a week. After the initial survey, plus the one for radio, we made out with about $35. The way I see it, that’s two days of G+ if I go solo and one day each if he tags along. Everything circles back to WDW.