My husband and I were sitting on the patio of a neighborhood restaurant. A gentleman we know frequents there sat down later. It was strange because he always sits inside at the bar … in the same seat … every time. When he made eye contact I said “Not sitting at the bar tonight?” He proceeded to explain why.

The three of us struck up a lovely conversation about all sorts of things. It looked to me like he was wearing a Mickey Mouse watch, but I was too far away to see it. I must have glanced at that watch for 30 minutes. Sometimes it looked like Mickey and sometimes I thought not. I was afraid to ask because if it wasn’t the question was going to be awkward.

We got on the topic of Service. I mentioned Disney. His eyes lit up and he started foaming at the mouth. Ok, I’m kidding about the foam. He immediately held up his … Mickey Mouse watch. We have decided he is now a friend. I told him I needed a pic of his watch to show you guys. 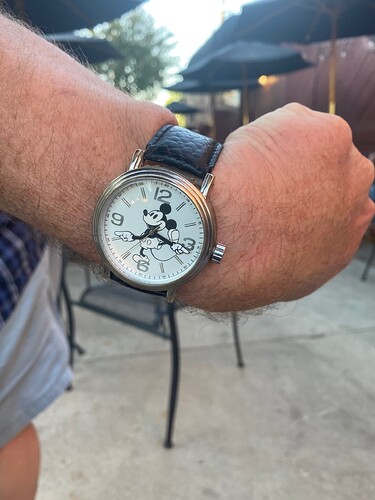 He proceeded to explain why.

Glad you made a Disney connection

He was protesting the bartender on duty. Said the bartender has a bad attitude, throws and slams things around when he gets mad. He has been going to that restaurant 4-5 times a week for 35 years. It’s where he goes for comfort and that bartender ruins his mood.

The establishment is lucky the patron still visits with the nasty bartender.

I love when the Disney radar goes off. When our pastor’s wife realized we knew all the things she was elated. (I still think she doubted our abilities. She was very worried about us before our trip. She did have good Intel, but not TP level.)

DH’s doctor is good but he’s all business and quick.

We once mentioned Disney . . .

He’s a huge Disney fan! Last visit we told him DH was going to FoP. He said “you’ll like it, it’s great!”

love when the Disney radar goes off.

I overheard a guest at the next table (but not near enough to speak to them) discussing their recent WDW trip. I gathered they are DVC from the way they were talking.

Another night at the same restaurant a guest remarked on my Mickey Mouse raincoat and I had noticed her SW Loungefly. We did speak. Well before one of the people in her party ushered her away recognizing this could become an all night conversation

In 2018 we went to a wedding for one of DH’s high school friends. (He came back to his hometown for his family to enjoy the traditional Indian ceremonies.). We were seated with people we had not seen in well over 25 years. We’d all worked at the same grocery store in the late 80’s.

Someone at the table said something Disney related. Then another comment. Then this guy “R” says something that suggests the inside track. So I say something back. And he gets it. And I get it. And then his wife and my DH give good natured groans and it’s all over.

R actually became a Disney certified TA in his “spare time” (he’s actually an engineer) to help family and friends.

DH is like “between Disney and nurse talk you always find them.”

When I realized another good natured new acquaintance was bonafide Disney person I mentioned how excited we were for our trip. How I was going to take the monorail from the Hollywood Studios to Hogsmede in grand celebration for DD’s favorites.

One of the dad’s at robotics - big bear of a guy, political science professor - rarely strings 2 words together. But if you look closely at his dark mask with tiny all over print - it’s a Disney mask! He and his wife visit maybe every other year. They last went in summer 2020.

Skipped this year when they found out Oberammergau Passion was on for this summer.

How awesome! That jerk of a bartender has no idea he’s the reason you have a new friend

It takes one to know one, doesn’t it? It’s amazing how quickly and easily you can start talking with another Disney fan once you have slyly discovered your common ground. I was doing business with a banker at Wells Fargo and noticed her Disney paraphenelia on her desk. As soon as I told her that I, too, am nuts for it, we couldn’t stop talking about it! I began to worry that the other patrons waiting for their turn would get annoyed, but we couldn’t stop! By the time I left I decided I will stop by the bank next time I’m looking for a travel mate and see if she wants to join me.

I had a similar realization that a couple of the other moms at DS12’s baseball game were Disney people. One of them was on a DCL cruise last week and is giving me her door decoration magnets to use for our cruise in August.