Bob Iger interview from the Orlando Sentinel. This doesn’t surprise me…

**Will Disney World check temperatures at the gates? Bob Iger talks about how parks could adapt post-coronavirus

How will Disney World be different in a post-coronavirus world?

The theme parks have been shut down March 16 and still don’t have an official opening date, as much still remains uncertain on the virus that’s killed more than 250 people in Florida and caused governments to enact executive orders to stay home.

But when Disney’s theme parks eventually reopen, the company could add new security steps, such as checking people’s temperature before they’re allowed inside to make people feel safe again, said Bob Iger in an interview with Barron’s on a variety of topics that included the company’s films and streaming service.

“One of the things that we’re discussing already is that in order to return to some semblance of normal, people will have to feel comfortable that they’re safe. Some of that could come in the form ultimately of a vaccine, but in the absence of that it could come from basically, more scrutiny, more restrictions,” Iger said in an edited transcript that was published Tuesday.

“Just as we now do bag checks for everybody that goes into our parks, it could be that at some point we add a component of that that takes people’s temperatures, as a for-instance," he said.

Iger said the company is studying China and the heightened security measures the country has taken to monitor people’s health during its economic recovery.

“So we’ve asked ourselves the question, let’s prepare for a world where our customers demand that we scrutinize everybody. Even if it creates a little bit of hardship, like it takes a little bit longer for people to get in,” Iger said.

It will likely be scanners that read temperature. Several places already have them - you walk through and if color on a screen indicates higher than normal you are pulled to the side for further checks.

It’s not like there will be a line for people to have a thermometer stuck under their tongues.

thermometer stuck under their tongues.

That will come later when they use it to swab for DNA instead of using fingerprints for ID.

I was on the first flight to Taiwan from the US after SARS. They had those scanners at the airport between exiting the plane and customs. It worked like those signs on the street that tell you how fast you are going. The only delay was that everyone was funneled into a single line and people pausing to see their number. That would be the logical choice.

I think I heard that Disney plans to make everyone ride Mission Space:Orange before anything else. Something about needing a centrifuge for rapid COVID-19 testing or something.

Yeah, when I did my 2 cruises to Cuba, they had the same system there. It was more an infrared system so there was no stopping to see a number.

Mission Space:Orange before anything else

Anyone who vomits must be sick, right?

thermometer stuck under their tongues.

There are worse thermometers…

Also, I would like to petition that the thermometer be pronounced as if two separate words, “thermo” “meter”. It makes sense and I’ve already gotten my DD13 convinced and she has convinced her science teachers as well.

I’d say this is probable, as well as at airports and all large businesses and workplaces. Manufacturing industry is already aware that this may be the next in-demand item. But like you all said, its a thermal scanner and would be much like going through a security check/metal detector. Next concern is not causing a bottleneck where people congregate in line to get through the scanners.

Also, say I am the person that gets up to the scanner and finds I unknowingly have a fever. What does everyone behind me in line do? Scatter and run? Now I have to turn around and go walk through the crowds to get back to my car to leave? This new way of life is going to have a lot of challenges for us to figure out.

Also, say I am the person that gets up to the scanner and finds I unknowingly have a fever. What does everyone behind me in line do?

And what are they doing financially with the people they turn away? And what about everyone staying in the same room? Same party but different room?

And what about everyone staying in the same room?

Art of Quarentine, Disney’s newest resort. You ONLY get the stay there if you run a fever…VERY exclusive!

Hard pass. Transportation is by ambulance only. Terrible hospital theming.

Before all this started, I’d thought that schools should have these.

“Yeah, when I did my 2 cruises to Cuba, they had the same system there. It was more an infrared system so there was no stopping to see a number.”

Well, in Taiwan it was more curiosity. It changed colors if you were too high and there were people with big guns standing nearby watching for the change. So, people could just ignore it.

But, it was interesting tech and who wouldn’t want to see their number the first few times they walk by one of those?

This all reminds me of the episode of Sliders from season 1 called “Fever”. They had body temperature scanners as you entered even places like a coffee shop.

Funny, I just tweeted this. 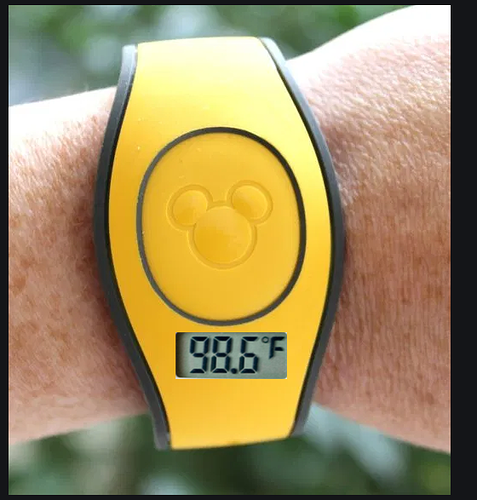 Yes. It isn’t enough by itself. It is but a single tool in the toolbox.

I do wonder what they will consider an elevated temperature. My wife has been checking her temperature several times a day since this started, and generally she hovers around 98.6. But yesterday, when she was working at the sewing machine and such, she got really hot. She checked. 99.2. Ten minutes later, after resting for a bit, she was back to 98.3 I think it was. She has always been very sensitive to heat, and being out in the sun and heat, like you have at Disney, would elevate her body temperature enough that some might think it is a slight fever when it isn’t.