Do you have a Disney-related holiday tradition that doesn’t involve being at a park? Today we decorated our Christmas tree, and we always, without fail, must watch The Muppet Christmas Carol. Even though my offspring are 27, 25, and 21. I think this tradition is at least 20 years old. We also buy a Christmas ornament every time we visit. (Although today DH confessed that he really, really wishes the gingerbread cookie ornament we got at the GF gingerbread house would break. Of course, it won’t, by now it’s completely petrified).

What Disney-related holiday things do you do?

We are watching it right now! It has been a tradition in my wife’s family - the first time I watched it was after we were married.

Aw! How wonderful. We adore the songs, but my eldest still gets a little spooked by the door knocker. When he was little it terrified him!

The kids can pretty much recite it line by line.

I’m planning to buy my kids a Disney Sketchbook ornament every year, with a character or movie theme they particularly liked that year. This year it was a flying Buzz & Woody and a light-up Beauty and the Beast rose! 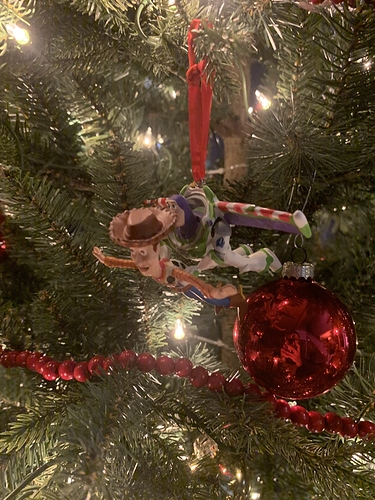 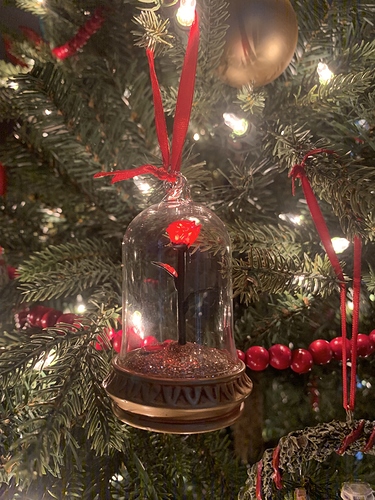 That rose ornament is beautiful. Is it battery-operated?

The ornament we got on our trip this year was from EE, a simple glass ball with shiny, shredded metal made from discarded oxygen tanks recovered from Everest. It looks like tinsel. It’s quite a mess up there, we were happy to have even just a tiny role in cleaning up the place.

That’s a really cool idea for an ornament!

Yes, the rose one is battery operated (bottom switch on and off). It’s also glass

The full version or the abridged? We were discussing this movie in La Cava this morning. When it’s missing the song, “When Love Is Gone,” it doesn’t even make sense.

The Disney+ version is abridged. But we do have the unabridged version that we purchased digitally on Amazon Video. It’s not my favorite song but I am in favor of having the complete film available.

We actually had it on VHS. Well, it is a 20+ year-old tradition so I guess we would.

Anyway, I remember the Christmas we realized we had pitched out the VHS player earlier that year and were suddenly left Muppet-less. That was not our finest moment. Then I realized I could buy it toute de suite on Amazon Video. Whew! Saved by technology.

“When Love Is Gone,” it doesn’t even make sense

I suppose for historical accuracy it should be there, but I could live without it.
I never watch Episode I of Star Wars, either. Granted, the rest of the story still makes perfect sense without it. Unlike Muppets.

It is lovely! I’ve only recently purchased a few glass ornaments, my main ornament collection is sterling, one per year. The first year with the cats, the tree came down twice. And now we tie it to the top window frame, too.

Also, I learned a 13 ft tree doesn’t make that much noise falling over.

When it’s missing the song, “When Love Is Gone,” it doesn’t even make sense.

Agreed. Our DVD contains both versions, but only the abridged version is widescreen, so we end up watching that one. Not sure why they abridged it to begin with.

first year with the cats

We anchor ours to the ceiling since Xmas tree seems to be a synonym for Cat Mt. Everest.

It’s abridged on Disney+, I’m so sad! For anyone wondering, it was abridged for the television version so it could fit more neatly into their time slots.

I thought it was because it didn’t go down well with kids, they were bored.

The scene definitely doesn’t make sense without it. Belle and Scrooge are chatting and then everyone is sobbing and we don’t even know that Belle has broken off their engagement.

I’m so glad I’ve found my people.
Some people I know don’t even know there is a difference!

I don’t actually love the song as much as I dislike the way the movie sits out of context without it.

Yes! I used to fast forward through it on VHS but at least I had the option.

abridged for the television version so it could fit more neatly into their time slots.

The irony is that on the DVD, the widescreen version is the abridged version, and the theatrical version is in full screen (4:5 mode). You would think they would have done the opposite.

The Amazon video version of The Muppets Christmas Carol is the full version. Although I don’t like “owning” digital movies, because, well, you don’t actually own them. I guess I should take a few minutes to download a version, like we did with Lady and the Tramp. Especially since we’re moving and the wifi at the house is spotty, at best. Hence, we don’t have Disney+, either.

My favorite Disney Christmas ornament tale is the time I got a great deal on a 2013 Christmas ornament, Mickey with his Sorcerer’s Apprentice cap on, with a little spot to put a pic of the kids. We bought it when we were in WDW just before Christmas, so it was a bit more special than the usual ornament.

And then DH point out to me when we were home & decorating the tree that the current year was actually 2014.

Hence the great deal, I suppose.