Disney For the Holidays

Hi I’m traveling to WDW Jan 5-7 and I will be at MK on the 6th. Does anyone know when the last day is that the castle looks like ice after Frozen Holiday Wish? I really hope I get to see the castle in ice. Thanks.

Pretty sure that gets changed on Jan 1st. I think the parade reverts back on the 1st to FoF, and the overlays stop then too.

This is from January 7th of this year 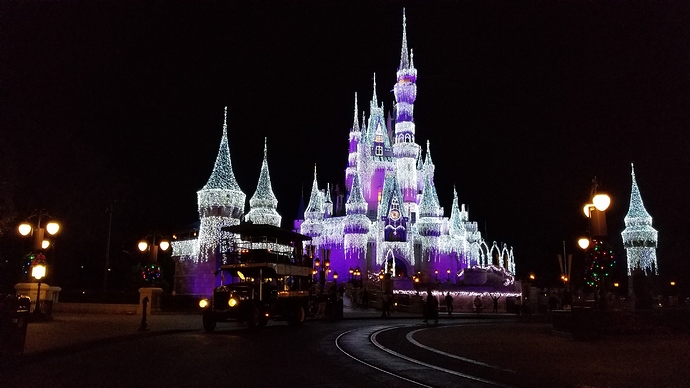 There’s a certain irony in the fact that winter only really kicks in full swing most of the time in January in other areas of the country, so it makes more sense to have the castle be “frozen” for the months of January and February than it does even in December.

At least in SE Michigan, as of late, the amount of snow we get in December is fairly low/minimal, but picks up in January.

(TP says that’s not a complete sentence, so I’m adding this more conventional sentence to satisfy the algorithm.)

I found a few articles from past years, saying it ran through Marathon weekend. So there’s definitely hope! I’m there 1/8 and 1/9.

(TP says that’s not a complete sentence, so I’m adding this more conventional sentence to satisfy the algorithm.)

My least favorite part of the boards.

My least favorite part of the boards.

Oh, you laconic types. If you were verbose, like your’s truly, you wouldn’t have that problem.

A few years back, we were in Disney in Mid-December, what a treat that was. That’s back when the Osborne Family Lights were still up at DHS. We wandered around DHS, sipping spiked hot chocolate and looking for the cat while the kids did whatever. Ah, memories! I’m glad Disney extends the holiday season, when it feels like other establishments drop the curtain precisely on Dec. 26, which is so sad.

This year, DH and I are making a quick trip for a concert in NYC, I hear it’s awesome during the holidays as well.

As a family, we celebrate Christmas Advent through Epiphany (which is almost halfway through January). It’s a good thing we cut down the tree about 2 miles from here, so it is as fresh as it can be- even then it’s a fire hazard 2 months later! But at least I can make Christmas last a long time, so there’s not that big let-down afterwards. I’m also a huge procrastinator, so leaving up the decorations for a while suits me.