That’s incorrect. It IS allowed and was encouraged by Disney themselves. It was part of their original marketing line to share your account among your family, no matter where they were. I’m sure this will follow the way of Netflix, eventually, but for now…it’s 100% allowed.

But whether or not you do, this whole thing is WILDLY insecure. Because not only is Disney+ using the same password…so is Disneyworld.com, Disneyvacationclub.com, Disneyland.com, ShopDisney.com, DisneyGiftcard.com and on and on.

And for some, your Disney account holds FAR more than the normal personal information associated with an account. Bank info, card info, address, SSN, etc…

But wouldn’t a way around this be to set up each account using a different email address? (Although…this is about a “bundle”, so perhaps that isn’t a thing.)

Sure, if you want to pay for multiple Disney+ accounts. But it’s not like MDE where you can group people together under “Friends and Family” (which would go a long way to securing it) and let them run wild with their selections.

Oh. No, I meant for those who want to share their Disney+ account password, to just set up Disney+ with a separate email address from the other Disney accounts.

But whether or not you do, this whole thing is WILDLY insecure.

Ehhh yes and no? Because the Disney account is SO omnipotent in what it does, you CAN go through and basically setup a phantom account that’s tied directly to 1 card and one 1 alias, but then you can’t use the Disney+ discounts when doing normal disney things (like trips) because all your personal info will be identical to your main account and that will set off a flag in Disney’s system when you try to cross them (or at least it did, I’m not sure it still does since they merged all the accounts)

So yes, you can do it, but it’ll come with limitations.

And thanks for the explanation. That makes sense.

I’d even feel better if there was a 2-factor-authentication happening but all we get is an email saying “there’s been a login” …doesn’t even say from where. Thanks Mickey, I feel safe now.

(though at least it’s not like Netflix’s “we detected a login to your account” emails. Those, I guess, are designed to make you crap bricks the way they’re worded. )

I’m sure many families will find this very convenient and the families who have “accidental” orders of $849.99 LEGO AT-AT sets will recover eventually. 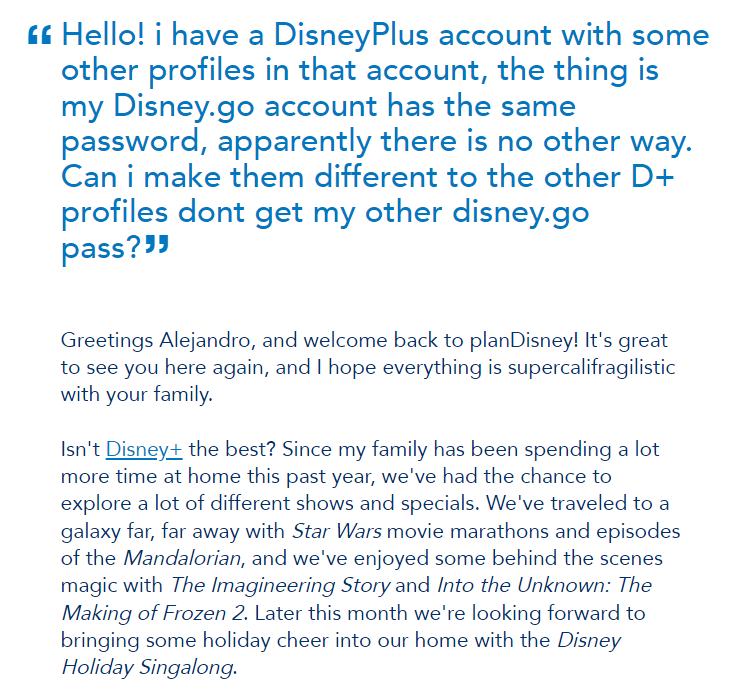 Two of my kids tried to log into D+ on a different device than they normally use and it kept sending codes to my email address and wanted them to change the password. I nearly lost my shit and told them they couldn’t watch D+. Under no circumstance were they allowed to change the password. My password is a string of arbitrary characters created by Keeper. I don’t even know what it is unless I open my vault.

OMG! Are they using AI to answer questions now instead of people?

No, template of marketing blurbs provided to the panel (Plan Disney), you can see interactive responses generally in the third paragraph… Plan Disney replaced Mom’s panel - volunteers who get a something like a free 5 night stay for 4 every year they are active.

It’s such a disservice to do that to both the guests and those helping.

Whomever came up with this method was a moron who must’ve never actually dealt with a customer directly before.

Even if they actually answer the question, it negatively impacts both guests and the “panel” cause it always comes across as extremely disingenuous. The guest feels like they weren’t really listened to and/or feel like they ARE talking to a robot, and the person helping’s answer’s validity is called into question because of that.

Not to mention, both the moms panel and the “plan Disney” team seems to have access to no more information than what we do here on the boards. In fact, I’d argue they know less.

Thanks for coming to my TED talk.

If your kids are using their tablets to watch and not the family TV, they need the password to log in.

You login for them, and they are good to go.

Possibly too “good to go”?

So if it’s a universal sign-in to all your Disney accounts, then signing in one of your kids to D+ on their tablet also gives them access to using any payment methods attached to your account for any Disney service? If so, this is a very real risk:

I’m sure many families will find this very convenient and the families who have “accidental” orders of $849.99 LEGO AT-AT sets will recover eventually.

We actually had this happen with a different online company a few years ago. Not that much, but close. The kid thought it was “in-game” money, not real money.

And since it was an online service and the last purchase we had made we had set up to our debit card (which is really NOT recommended for anything online), we were unsuccessful in disputing it with both the vendor and our bank. (I think we might have been successful had it been to a credit card.)

The kid has been assigned some additional chores indefinitely to work it off. If our budget was tighter, it could have been a real problem.

we had set up to our debit card

And yet many financial advisors keep saying this… 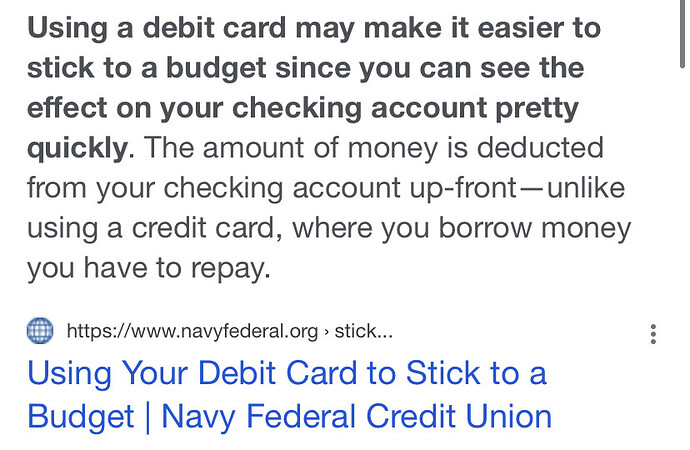 So the person that did it thought it was The Way…

I want as few sites as possible that might charge me at will to have a direct connection to my money.
Credit card is a nice buffer, plus you get to earn points on those.

(Also, no use of debit at anything but a bank ATM and then mostly just my own bank.)

My only direct bank connections are things like mortgage and utilities if they require it. Everything else is a credit charge that gets auto-payed later.

For people that have issues with budgeting, I’d suggest creating a second placeholder savings account, then setting up auto-transfers from their main savings to the second one to cover expected charges. Then they can minimize direct access to their accounts and still know that they’ve “saved” the money the need to pay off those charge cards each month.

Yep. I’ve actually stopped storing even my credit card as much as possible. Apparently Sonic got hacked a few years ago and they got the credit card numbers. I suspect they may have even gotten our Sonic usage history as well. We had a whole series of Sonic-sized charges come through labeled as Sonic that were very in line with our usual usage. Easily disputed, but would have been easy to overlook and we had to get the card replaced. We think we also had something similar happen with Panda Express. 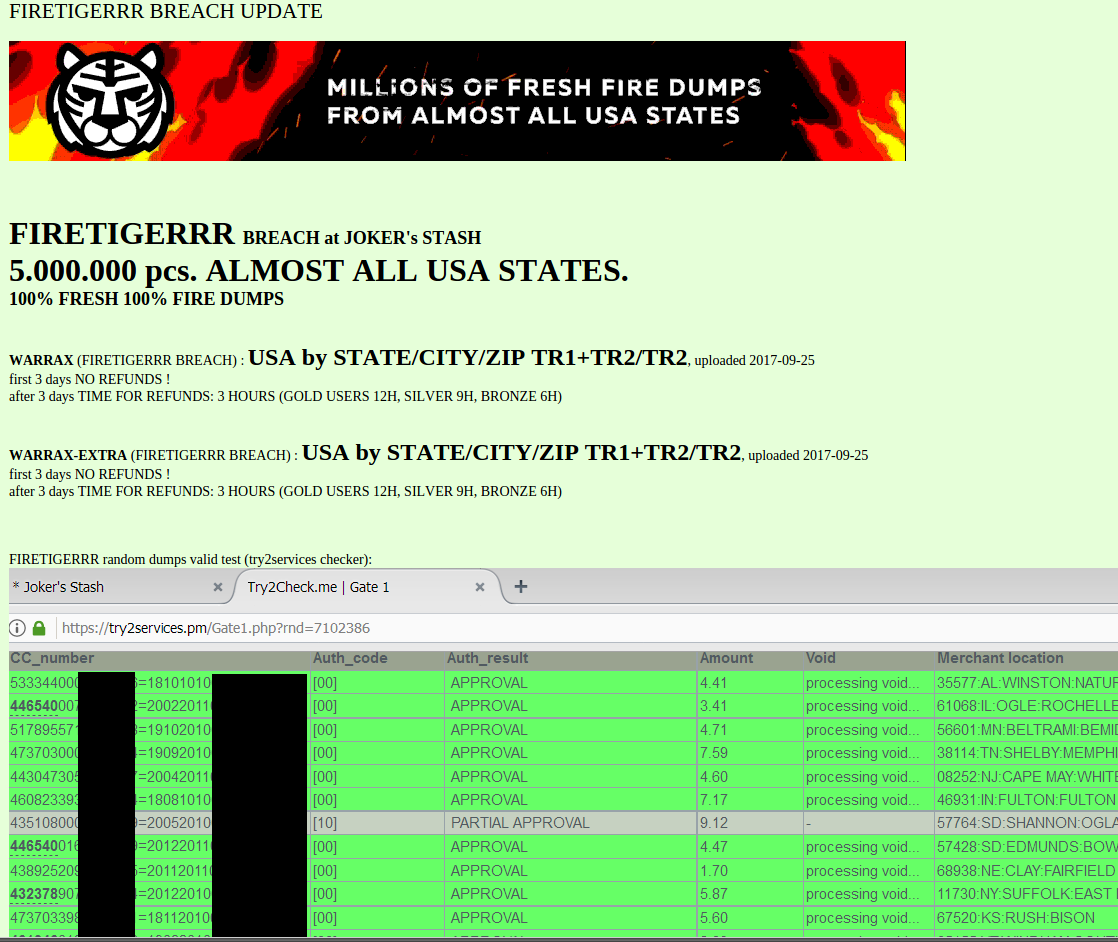 Breach at Sonic Drive-In May Have Impacted Millions of Credit, Debit Cards –...

Sonic Drive-In, a fast-food chain with nearly 3,600 locations across 45 U.S. states, has acknowledged a breach affecting an unknown number of store payment card systems. The ongoing breach may have led to a fire sale on millions of stolen…

100% this! I don’t know that I’ve ever found a satisfactory answer there. I’ve always came here or another disney fan site and received more accurate, concise and thorough info.