We’ll be traveling to the World the first week of November, and my dad has non-Parkinson’s tremors and is concerned about shaking so much that he won’t be able to use utensils (he feels more stress in public settings, and thus tends to shake more).

He’s not worried about finding snacks or counter service food. We’re sure there are plenty of delicious hand-held options.

However, he is concerned if there will be food he can eat without using utensils at the table service restaurants we currently have reservations for: Skipper Canteen, Hollywood Brown Derby, Be Our Guest,and Restaurant Marrakesh - all for lunch.

I’m going to look at the menus,but I thought experienced diners may have a better idea of what dishes may work well to eat by hand, as a menu description may not explain everything. He’s willing to order appetizers as an entree if those would work as well.

Also, if there’s a restaurant (that our group of 10 might still be able to get into) that would have great choices for him, we’re open to other ideas as well.

This isn’t really an answer to your question, but you might find it interesting. I found this spoon on the internet that’s supposed to help with tremors. My MIL has a similar issue and we were thinking of getting her one, which is why it’s on my radar. Anyway, just passing the link along, in case it’s helpful to you. 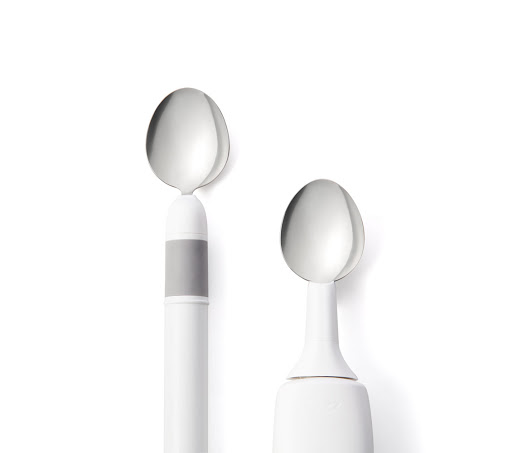 Liftware's selection of stabilizing and leveling handles and attachments are designed to help people with hand tremor or limited hand and arm mobility retain dignity, confidence, and independence.

My first thought was Liberty Tree Tavern for lunch since it has burgers and sandwiches. I have to say, I do not know if it will help but wdw is a place that there are children everywhere! When we got to Tusker House (that may be a good choice too) the 2 year old I was traveling with suddenly thought it was hysterical to throw food at us, in BOG he ran around the main dining room. It is the one place in the world that no one will ever, and I mean ever- think anything about picking up food with your hands. I hope he, and your whole family have a magical time!

I’ve seen this too. They have a mini-test that you can print and try to see whether your tremors are within the range that liftware may be able to help. I plan to try that with him the next time we’re together. The actual liftware is on back order right now due to the recent press they’ve received. Thank you!

Thank you! I agree that the World is one of the least “judgey” places ever. I just wanted to help alleviate some of his concerns beforehand if I can.

BOG has sandwiches. The Angus burger at HBD is awesome. It’s been too long since I ate at Marrakesh to remember. I haven’t eaten at Skipper’s yet, and there may be a major menu change coming soon.

I just looked at the menus posted,and I think both Marrakesh and Skipper’s will be challenging to find “finger food”. Liberty Tree and Plaza both have sandwiches on their menus if you decide you want something different in MK. In EP, if you are really interested in Moroccan food, Spice Road Table may be the better choice. But there are many other options in EP as well. VN has awesome pizza certainly Hand-held food. R&C has both fish and chips and a burger on the menu. Tokyo Dining has sushi and tempura. Chefs de France has numerous sandwiches and flatbreads. A long way of saying that there are numerous options that would be along the lines of what you’re looking for.

Thank you for all the suggestions! We’ll also be at Epcot during the Food & Wine festival, so we’ll have lots of options there. Skipper & Marrakesh do seem the most challenging. I could skip Skipper, but I’d like to do Marrakesh, mostly because it’s been a tradition, and we’ve gone there for all of our trips.

Just fyi for anyone else dealing with this. I reviewed the menus for the 4 restaurants that we’re booked at (thanks to all the awesome menus and pictures posted online) and sent my dad the following possibilities:

Looks like ordering one or two of these appetizers as your entree would be your best bet:
*Falls Family Falafel - picture: http://cdn.wdwmagic.com/imgstore/ElementGalleryItems/dining/Fullsize/Skipper-Canteen_Full_26179.jpg;width=1800;quality=60

*House-made Arepas (this is supposed to be eaten like a sandwich. You just have to put it together (or one of us could) - picture: http://cdn.wdwmagic.com/imgstore/ElementGalleryItems/dining/Fullsize/Skipper-Canteen_Full_26264.jpg;width=1200;height=630;mode=crop;quality=60;encoder=freeimage;progressive=true

*Children’s Menu Arepas: This also appears as a children’s option, which has the mini-sandwiches pre-made (http://cdn2-b.examiner.com/sites/default/files/styles/image_content_width/hash/bc/96/bc9616a0981ecbff5d9e143fa5727762.jpg?itok=O3tcXnKo)

Magic Kingdom @ Be Our Guest:

They do a choice of 3 mini-desserts here, and some of them look like you could pick-up and eat with your hands.
http://www.thepurplepumpkinblog.co.uk/wp-content/uploads/2015/04/Hollywood-Brown-Derby-Disney-Hollywood-Studios-24.jpg

Appetizers, order one or two as entree, if wanted
*Combination plate (beef brewat rolls, chicken bastilla, and a salad that you could pass to someone else) - https://media-cdn.tripadvisor.com/media/photo-s/09/f1/f8/03/restaurant-marrakesh.jpg
*Chicken bastilla - http://www.moroccopavilion.com/wp-content/uploads/2012/09/Chicken-Bastilla-988x790.jpg
*Goat Cheese with crispy bread - https://eatingwdw.files.wordpress.com/2012/01/rm-cheese-and-crispy-bread-for-two.jpg

WDW is VERY accommodating. Contact the restaurant you want to go to (BOG) and explain the situaiton. They can likely make whatevery he wants to eat for him on his visit.

Korenclark, my Mother-in-law has essential tremors. We ordered the Oxo Good Grips weighted utensils for her. And they have been a real blessing! We got the set of 4 - soup spoon, teaspoon, fork and rocker knife. They are even bendable to make eating easier. She has used all 4 and really likes them! I got them from Wright Stuff or Wright Source which was the cheapest place I found them. If you got to EssentialTremor.org, you will find so much helpful information plus a link to the Wright _____ website. You will also find the correct website if you google Good Grips weighted utensils. I hope this will help make your trip more enjoyable. My daughter and I will also be at WDW for the Food and Wine Festival!!

Thank you for the idea! I’ll look into those!