I was looking at the Touring Plans Crowd predictor to determine the dates we would visit Disney. On the Lines the first week of April seems to have pretty low crowds varying from 3-4 crowd level BUT when looking at Undercover Tourist the crowd level is MUCH different…it ranges to 7-8. I’m just curious why the discrepancy and if I need to change my visit dates. Thanks a bunch!

I would guess that TP is going by crowd levels from 2019? (The most recent “normal” year) 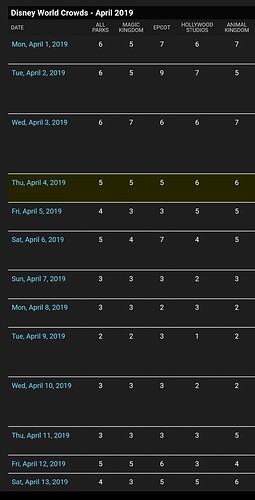 I would guess that TP is going by crowd levels from 2019?

That would be my guess too. But the timing of Easter and which spring break weeks are more common makes historical less useful for the second week of March through the middle of April

So is it a toss up on crowd levels??? I’m more confused than ever! Hahaha

I would guess that TP is going by crowd levels from 2019?

But have these been adjusted for differences in holidays and events yet, or will that happen later?

I’m generally curious about how far in advance that stuff happens. I would think it would be early, since people book early, and I understand there are last minute adjustments that will need to be made, but do they fix any discrepancies from the previous years’ estimates at 6mo? 4m? 2m? Like you said, it’s anyone’s guess, but I’m sure there’s a real answer.

I don’t know their timing metrics. I do know that they typically do updates about 6 times a year. But they are not going through those 12 months every time. It’s usually targeted to a closer upcoming season.

2021 was crazy that they did 13 updates/changes to the Crowd Calendar!

Maybe @fred can give some thoughts.

I’m anticipating going at the same time and saw the same prediction on Undercover Tourist. Another bad sign is that ticket prices that week are equal to or higher than any other date in April, leading me to believe Disney expects heavy crowds.

On the flip side, other crowd calendars I found were more in line with TP. The week is two-weeks before Easter and after college spring breaks, as well as not occurring at the same time as Florida grade-school Spring Breaks. All good signs for more moderate crowds.

If crowds are awful, I’ll be the dad with a wife and two girls sitting down in front of Cinderella’s castle breathing into a brown paper bag.

Same. The ticket prices had me balking a bit. I’m curious what the vip prices will be, that’s usually a good indication of crowds too.