Creating Disney Magic for a Birthday

My daughter will be turning 5 on the second day of our trip in November. Besides the pins, which pretty much everyone gets, I would love ideas on how to make her day extra special!

Where are you staying? You can order a cake to have delivered to your room. They are very reasonably priced.

Disney florist can be pricey, but you can have a lovely gift basket and balloon sent directly to your room.

AoA. can they do custom cakes, or does that get pricey?

It’s different at each resort because each one is serviced by a different bakery. The basic cakes will be a pre set selection of flavors and they will write on it for no charge. If you get into the ones with custom decorations and characters they can get pretty expensive, but only a few of the resorts offer that.

Another option is to have a cake delivered to one of your meals.

Do you know of any off property places that will deliver to the resorts?

Pricey option, but Bibbity Bobbity Boutique might be a good option if she’s a princess fan.

Most off site places can deliver to the resort. Disney Floral is the only one that they can actually leave in your room while you aren’t in it.

How do you go about having a cake delivered to a meal? We are going to Le Cellier for my husband’s bday, and I was wanting to have this done.

Call the cake line. They should be able to help you make arrangements and choose a cake. 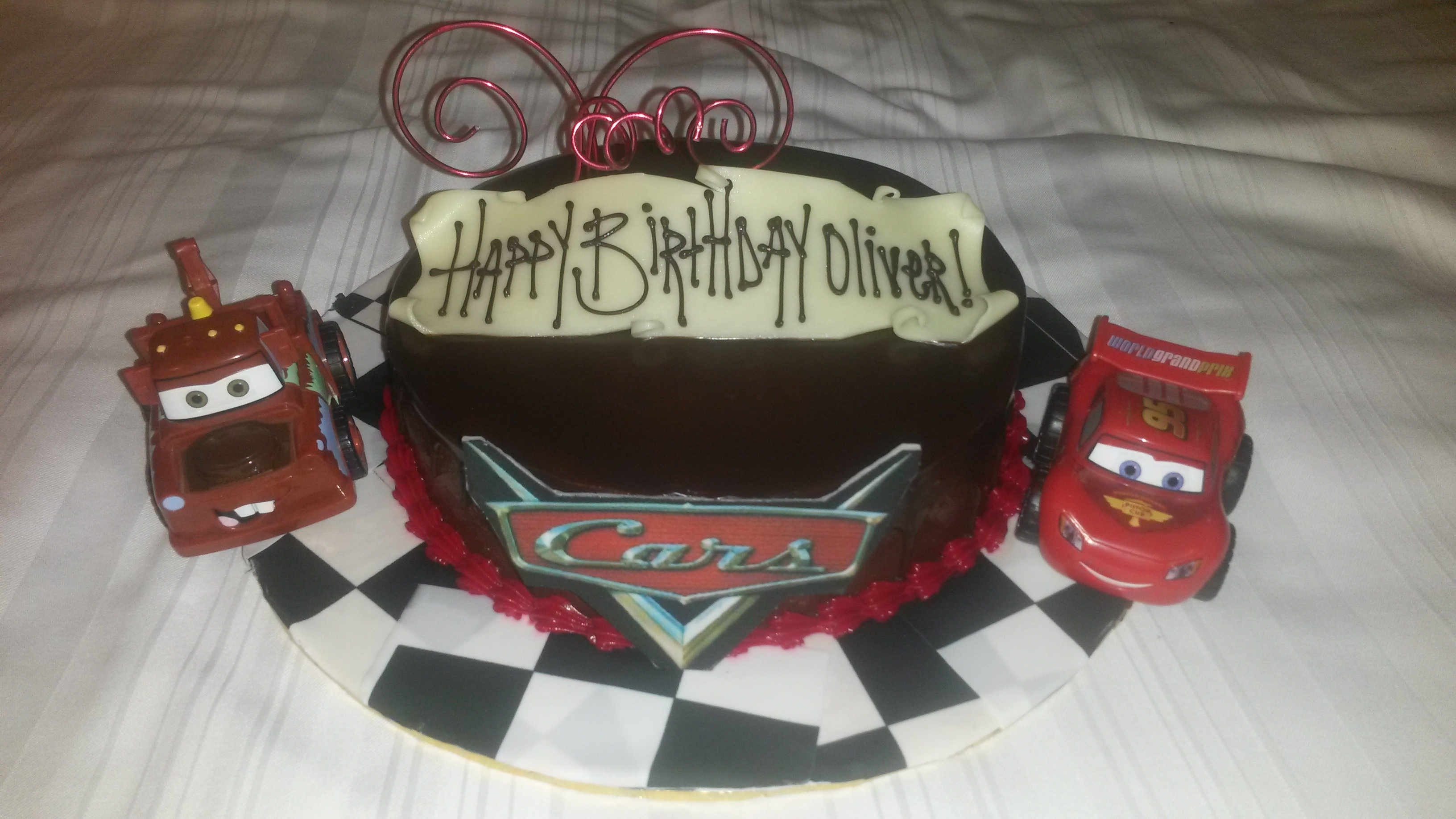 This cost us $60 (though the figures were brought from home). Chocolate mousse filling with dark chocolate ganache on the outside. It was moist and delicious.
It was an 8" cake, and it was about 3" tall.
We picked it up at the pastry section in the Riverside food court. They gave us candles, matches, and plates. We grabbed a knife and forks from the food court. It is boy themed, but they have a world of options for any budget.

Wow! $60, eh, but I kind of expected to pay a lot, and THIS is sooo much cooler than a basic cake. Great idea to bring your own figures. I will call my resort when we are closer - not sure AoA will have as great a pastry section in their food court. Thanks so much!

Can I mention that it is her birthday at a character meal or to a cast member at a character M&G? Will they do anything special, or just look at me funny? Haha. Anyone that has experience with this, I’d greatly appreciate the input.

They might give her a cupcake. And some of them will give a card that is signed by the characters. I got one from BoG and I know CP does that.

here’s my take on birthday at the parks: just being at Disney is a pretty spectacular way to spend a birthday, anything else is gravy. I can think of all the birthdays I had bringing cupcakes for classmates and still having homework…

That said, for my son, we made sure to mention it when making all reservations, room and dining. We had breakfast at crystal Palace, and they brought my son a cupcake and a signed card. We pinned his birthday button to his stroller and lots of people wished him happy birthday. The year before, be our guest brought him some of the “gray stuff” for his first birthday.

We had a pool party with the above cake and pizza we had delivered from flippers, which was delicious. The cake isn’t actually made at the hotel, there are a few bakeries on property, and depending on which bakery is closest they’ll make it and leave it at your resorts food court. I think beach club will do AoA cakes.

People, including characters will notice birthday buttons and comment on them.

Checked out the Disney Florist website…some cute options! Thanks!

So very true…thanks for the input!

The thread @Outer1 posted was incredibly helpful for us. We don’t usually make a big deal about birthdays, but our daughters are celebrating turning 13 & 16 this trip, so I’ve ordered a pretty fancy cake to have delivered to our table at Yachtsmans. That thread has all the phone numbers and info at the beginning and some incredible ideas for cakes.

If you do get a cake, order on the smaller side…with all the other food and snacks that you’ll be eating throughout your trip, a big slice of cake may not be for everyone! Thank goodness for room fridges, but we were definitely eating it the next day. Some places will do mini two tier cakes that could feed one, or provide a couple bites for several…and then others can also eat dessert on the menu