Same! Though when it’s hot I do like to wear thin layers.

I’d rather be too warm than too cold.

I’m definitely a wimp when it comes to the cold, and in general I would agree…up to a point.

There is a point where “too warm” crosses over into “too hot.”

I’m definitely a wimp when it comes to the cold

And you live in Michigan!

And you live in Michigan!

Yes. And this is why God invented layers! (Think I’m exaggerating?)

After both of our girls were in college, DH and I started taking more frequent trips together and it has been great for us. We forgot how much fun we have together lol We have our 4th year in a row UOR/WDW trip planned for Feb 2021. We tend to go for a shorter time so that we can take a few short trips to different places each year.

Governor Newsom stated earlier today that California will be making announcements soon about theme park guidelines. He stated he is not ready to share details today but very soon.

I hope that means this week. I really have about 1.5 weeks to reschedule my October trip.

ugh, I feel like he keeps saying that, but we still aren’t getting anywhere

My theory is that the state of California is waiting to see if there is a spike after Labor Day weekend. If numbers continue as they are or trend down as we go into next week, I wonder if then we will get an announcement. I say this because here in Washington State numbers are trending down (yay!) but I think the health authorities are waiting with bated breath to see if Labor Day weekend results in a spike before loosening anything such as in person instruction at public schools. WA and CA are handling this in a more similar manner than FL and CA. Much more conservative as it pertains to the virus. Whether that’s good or bad is an individual judgment.

A little rumor indicating an announcement could come soon:

I was “supposed” to be sitting on an airplane headed to Anaheim right now… (I just fishing for pity!!

I’ve decided to make “Disney” food every day I would have been there. Mostly stuff I would have eaten while in the parks.

I made “Emperor’s New Groove” inspired Spinach Puffs this morning.

We were supposed to go out for steak at either Morton’s or Ruth’s Chris on Harbor Blvd tonight. So I’m grilling at home. I am going to add bacon wrapped asparagus in honor of Bengal BBQ.

Mon. - Minnie Caramel Apples (about to go fill chocolate “bow” molds after this)

Tues - Ronto Wrap (Went to a local deli for the sausage, pork & slaw and I can assemble the rest)

Thursday - Corn dogs - from scratch. I have a batter recipe and got “deluxe” hot hogs at the deli

I typically try to lose about 10 - 15 pound before I go on vacation as eating junk is a big part of the fun. Even though I knew I wasn’t going I’ve working out anyway and dropped more than 20 pounds. (I’m not “heavy” normally, so I’m back down to my college weight - 25 years ago! I figure I’ve earned a week of homemade goodies!)

Sorry about the trip, that’s always a bummer. But what a great idea to keep the spirits up (and the tummy full) as a substitute. I love the creativity.

Let us know how your treats turn out! A stay-at-home trip report substitute?

Extremely tasty! I’ve never worked with puff pastry before. They are supposed to be “sealed horns”, but I didn’t close them tight enough & most of them split. (no effect on taste, just looks!)

Here’s mine - My oven cooks a bit hotter, so they got a bit extra brown. (not burnt though!) Next time I’ll lower the heat by 25 degrees and make them a bit larger so I can seal them better. 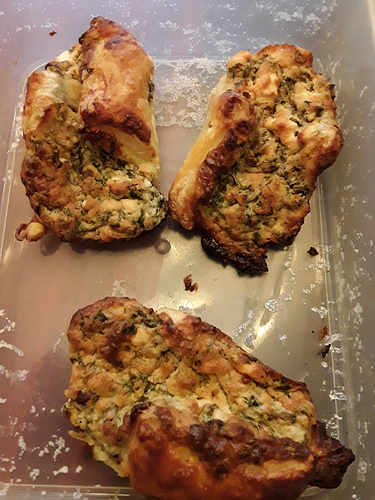 I never liked your spinach puffs.

We were supposed to eat at Morton’s Steakhouse tonight on S. Harbor Blvd by the hotel. So I grilled out & made bacon wrapped asparagus like Bengal BBQ

We had crab legs & shrimp earlier in the week. I made sure to save some for this meal. 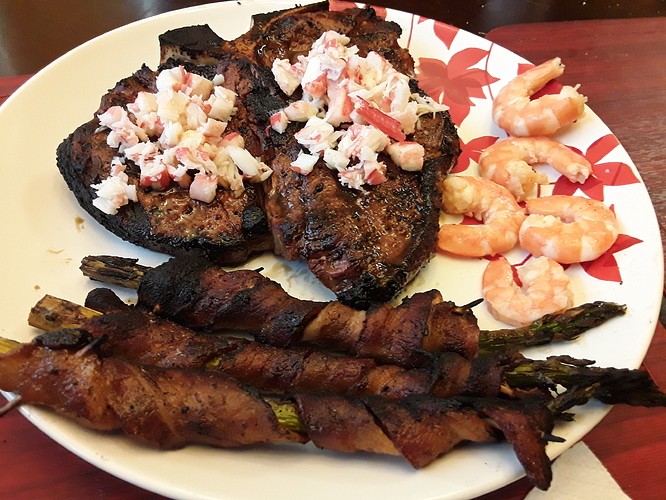 Oh my gosh, it looks amazing! I am now so hungry!!!

Oh my gosh! That looks so good! I am very much looking forward to the rest of “your stay at home trip report substitute”