Sure wish we weren’t paying rent for an empty apartment

Ditto. But hard to complain since DD20 clearly would rather be here anyway. She was super homesick last year pre-pandemic. We keep telling ourselves it’s our part in stimulating the economy. Along with my unused gym membership (it’s a small gym we’d like to stay open). And our overindulging in takeout.

We’re torn on what to do for fall. Not from a safety standpoint, but she’d rather be here and we aren’t sure how many of her classes could be online. But the apartments in Austin are pushing for deposits.

We are doing 5th grade band groups, per classrooms, outside at 10 feet. We cannot mix classrooms.

Our singing guidance is 10 feet, low tones, no more than 30 (?) minutes- impossible.

Like last June, we will hold graduation, outside, in a series of commencement groups. Families can have up to six.

This year we are adding a “prom like” event and a version of another graduation tradition.

I’m excited to see what happens with the schedule when DS changes from 5 half days to 5 full days.

This is so interesting to me that this makes a difference. I guess a lot of Gregorian chants are on the program?

Actually I think would have to stop giggling to even talk about it.

Our guidelines are what the doctors would approve. These are the same doctors that have said 3ft all year long.

I’m hopeful DS won’t swear under his breath for the next five years as he pays off his student loan he had to take for room and board. Thankfully, his classes are in person. It’s just everything else that has been very less-than. For a small school, it had a smorgasbord of cool on-property activities he’d only begun to tap into (men’s choir, intramural sports, political club, student musical) at the end of his first semester.

Meanwhile, the price went UP, but the services went down. The food has wholly improved since September when they had weeks of boxed meals.

On the upside, after they tested over 600 students on Monday and got ZERO positives, they have loosened up a little with groups in the dining hall and in resident halls. (It’s a super small school.) They still can’t do anything in the student union. I might cry again. The bookstore remains closed except for toiletries sold during certain hours.

Ha - I bet they find a way to open that puppy up for graduation weekend when parents are there! I’m fairly certain DS just wants to forget these two years, however.

The one salvation - the one I shut him up with when he starts complaining loudly - is that he met the most wonderful young woman and I see a wedding next year.

This is epic. LOL.
I am picturing 11 year olds singing “Old Man River.”
It could be very educational?

I’m glad those kids at least get to participate in music. As a band / choir geek myself, I know how important those activities are, especially in high school. Also, could be worse: 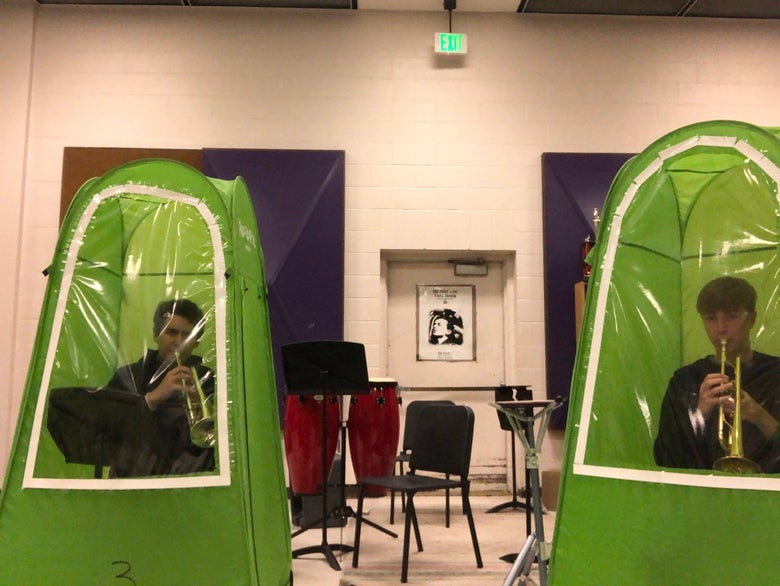 No, they weren’t forced to rehearse like this. Yes, part of it was staged. And obviously, the tents are awesome.

Former voice student here.
In general, he higher the notes, the more air you’re pushing through your throat over the vocal cords because of how stretched/taut they are. They need the additional support.
But. If you are soprano trying to hit lower notes that are really outside of your range, you’ll also use more air to support it.
So the difference to only sing low tones kind of baffles me here, unless that means only bass through alto voices are being used. When I was studying ( almost 30 years ago

) I would be pretty much screwed as a coloratura soprano.

Those things make me claustrophobic just looking at them

Yeah, my kids don’t have to play in anything like that. Yeesh. They just space their chairs out. My kids play saxophone and euphonium and they have bell covers they put on their instruments during rehearsals. My euphonium player gets doggy pee pads to dump his spit valves on.

The only time they have had virtual for practice is when the school closed for Covid cases or snow.

As a former trombonist, I do not see how on earth those could be played in those tents. Even if you bent forward, you’d have to be Shaq-sized to be able to go beyond 3rd position!

Also in MA, each district has such different rules. Our HS band has been playing in person since September,10ft distance, outside until the weather got cold and in the auditorium since then. The middle school band was remote for the first half of the year, then started in person in January with same guidelines as the HS. Band is what saved school for my son this year.

Pfizer just applied for emergency use of their COVID vax for 12-15 year olds.

Actually the rules are the same, the interpretation of them are quite different.

That’s exciting! I just went and checked dates to get an idea. J&J applied for their EUA on 2/4 and it was granted 2/27. May would he incredible! A huge help to achieving herd immunity if there turns out to be too much hesitancy in adults.

I’m super curious how they were able to accelerate the timeline since it wasn’t that long ago they were saying it would likely be late summer/fall before they’d be able to make it available to 12-15s. (I thought that was a “passage of time during the trials” hurdle.)

Mental health is so important! You will be feel so, so much better, see life with a different perspective, and be energized. If you have been vaccinated, GO!

DH and I just got our first dose on Tuesday. But we have been out of town 5 times since the beginning of the pandemic and staying in hotels each time. The first time, June 2020 (when we moved DD and DS out of their college apartments), was scary. So much about the virus was still unknown. We wiped down all the touchable hard surfaces in the hotel with a dilute solution of Clorox and bought our own towels and blankets. But that trip got us out of the house and after the initial anxiety, we relaxed and enjoyed ourselves.

We haven’t hesitate to go out of time after that, unless the hotels were closed to non essential workers. And the first time was the only time we bought our own towels and blankets! And we have progressively wiped down the rooms less with each trip. We take our precautions and GO!

The school said they could walk with the class of 2021. That is not the same! Who is going to return to walk!? Now, as June 2021 is rolling around, commencement will be virtual.

wish we weren’t paying rent for an empty apartment but it’s been a weird year.

We were in the same boat. We could have literally funded a very nice WDW trip with that rent money! We paid for 9 months of rent while DS was at home. And he has signed a new contract for next year before the school says what it will do.