My wife and I are in our 50s and our three children in out early 20s Will be staying on a Saturday night at Royal Pacific, giving us two days in universal Orlando. I have read different reviews as to whether to:

A.)do one park per day

Maximum efficiency I know means 1 Park per day but sadly I doubt we will ever be together for this experience again. So while efficiency matters, experience is paramount. We want to see all that we can in both parks but WWOHP is the top priority. We can move fast and are fit but don’t want to blow by the nuances as though taking the beaches of Normandy. As we are at the Royal Pacific Hotel, we could revisit WWOHP on Saturday and perhaps do HE train then??

Lastly, once we figure this itinerary out, let’s move to something simpler like strategizing on Korean Peninsula detente!

I went to UOR last year and visited on three separate occasions (not full days each time). I’m going again this year and have allocated two days. I’ve wrestled with the question of how I allocate my time.

My personal view is that the castle is amazing inside and out, but that Forbidden journey is not all that great. Diagon Alley is amazing and Gringott’s has great theming, but the ride didn’t blow me away like some of the non-Potter rides did. Hogwart’s Express is fun — I rode it both ways. Again, the theming is incredibly good.

I thought both HP restaurants were poor. But (here it comes again) the theming is good.

The simple thing to do is one park each day, but then you lose HE and I think that’s a great pity.

Unfortunately that means you have to park-hop in a way that can be a bit artificial. You’re really only doing it to get the train.

Some people do an HP day and a non-HP day. That would probably be overkill for me. I’m not that into HP.

I did Diagon Alley during the day and at night. But the funny thing is — as I look back — I did what you said you didn’t want to. I was on a mission and the whole thing became a bit of a blur. You risk the danger of becoming a kid in a candy store and end up feeling sick and not really enjoying anything.

Are you getting Express Passes? I recommend them.

As we are staying at Royal Pacific primarily to get the early access AND the Fast Passes included with the room prices, I definitely will want Fast Pass usage. Am still murky as to when and where we obtain them…at check in to Royal Pacific? We will be in Orlando by Friday night at a hotel near the Royal Pacific so, if possible, we could get the Fast Passes Friday night so we can be ready to hit IOA at rope drop…?? Also murky if Fast Passes at Universal Orlando are like those for WDW. At WDW, we will have 6 fast passes per day per person as we are at a concierge level that allows us to buy 3 additional fast passes per day. At Universal Orlando, does one Fast Pass allow us fast pass entry all day to all eligible rides, or does the one fast pass only work for one ride once, or do we get multiple fast passes a La WDW?

I’m thinking we might go with plan A and C… Hitting one park per day, but then going back at night after supper to experience more WWOHP at night via the HE train. Thoughts?

I don’t know how you collect the Express Passes as I’ve never stayed on property. I’ve bought them as an add-on and picked them up at the kiosks near the entrance.

The ones you get with your hotel reservation allow multiple use on pretty much all rides, including all the HP stuff. The system is vastly better than Fast Passes. You just go where you want, when you want. You just use the Express Pass entrance every time. Perfect!

However, sometimes you may not want to skip the main line as some of the queues have theming that’s worth hanging around for. I have a feeling the EP line for Forbidden Journey skips a lot of the castle. You can actually do a separate castle tour if you want to take the EP line for quick access to the ride. (I say “tour” — it’s self-guided. You’re basically in a parallel line to the regular line for FJ, but you just don’t ride the ride and you can move as fast or as slow as you like.)

I think your new plan sounds very sensible. I’d copy it myself, but I’m limiting my UOR hours to around 11-6pm each time, because there are things at WDW I want to do in the evenings.

Oh, the Cinematic Spectacular (night-time show) is a waste of everybody’s time. As is the parade. Nothing near to Disney quality. In my view. YMMV.

Wow! Prof and Tinker, I appreciate you greatly. I think if we hit 1 park per day at early rope drop, we should be able to get in the standby line to see all the surprises in the longer queue, then maybe use the Express Pass later Saturday night as we revisit both parts of WWOHP via the HE. Now, the question is, How do I enter such a plan into the Touring Plan grid so as to get a suggested plan or, if necessary, to enter a customized personal plan and then get either of these scrutinized? Any tips? The 2day/2 park/ Early Access/ Part 1 and 2 templates don’t seem to account for the rope drop early access to the WWOHP, nor does it seem to allow for a way to enter the HE train into the evening revisit plan.

Personally I wouldn’t bother with a Touring Plan. You have Express Passes. You can literally do what you want when you want with pretty minimal queuing.

I plan my WDW days within an inch of their lives, but I do virtually no UOR planning beyond knowing broadly what I want to achieve during my visits. Maybe I’ll do Spider-Man first when I arrive. Maybe I’ll do Hulk. There’s no need to decide!

I have to agree that with express pass you really don’t need a touring plans. Do you have the Touring Plans Universal app? I may just use the app to check the list of attractions. Let me show you:

This is sorted by “super land” 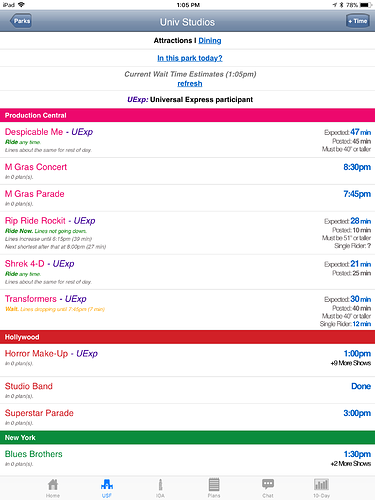 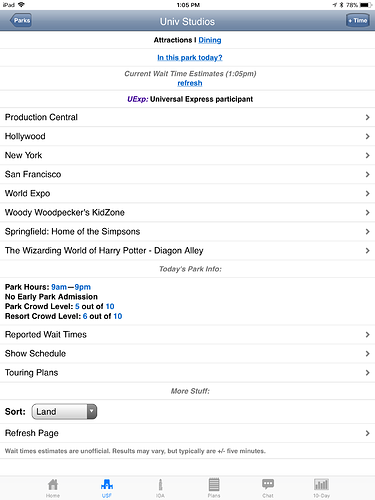 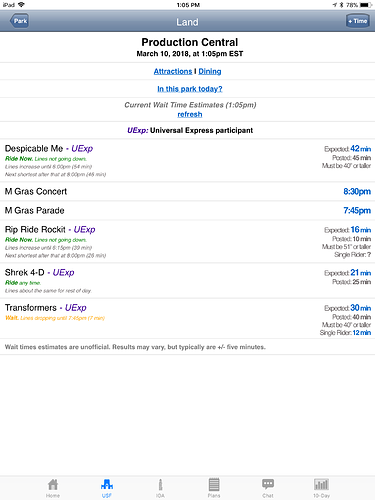 Yes I’m a new Touring Plan member and will just go with the flow with use of our express passes at Universal Orlando . Many many thanks.

Did we welcome you? Welcome! I am sure in the next couple of days someone else will pop in and tell you that you must have a touring plan!

I don’t have touring plan advice for you, but staying at RP makes getting in and out of the park easy so go back after dinner.

I just want to say that Harry Potter is amazing. I was only there once and didn’t spend as much time as I would have liked. I only did the rides once - they were fun and I do want to reexperience them. However, the most fun I had was going around and doing spells with the wands. I mean I only spent 50 on a wand because my seven year old wanted one. You might feel silly as an adult but it is so fun and makes you stop and really take in all the details. Or walk around and watch others cast the spells.

Have a good time!

You have gotten some fantastic advice here. I want to just throw in a few things.

You must have a touring plan! Seriously, even though it’s not necessary, I would put one together just to make sure you hit everything that you want to do and don’t miss something.

If the app is anywhere near as helpful as you all, I’m all set as I do have and will setup a cursory plan to roughly guide. Love Potter stuff. Just binge watched all the movies with my wife who had not seen them sequentially or totally so as to catch the allusions in the park to The story. May try hitting the non WWOHP rides in both parks on Saturday. Then hit WWOHP Saturday night riding train one way. Then go back Sunday by train the other way, and spend most of Sunday in Diagon Alley. Any non WWOHP rides we missed could be picked up Sunday late afternoon. What about that idea?

Lol, I make my own TPs ( confession time)

Sounds like a solid plan, but keep in mind that even with EP, traveling between parks by HE can kill some time. If you’re planning to do all non-Potter attractions in both parks in one day, you’ll have to be very focused to make sure you hit everything. There are some attractions (e.g., Minion Mayhem, Rip Ride Rockit) that can have long waits even in the EP line. It will depend on how selective you are (and your tolerance for simulators!).

In any case, as you get closer and finalize your plans, don’t hesitate to come back if you have more questions… we’re all glad to help!

Hey, as said before Express Pass comes with your hotel reservation. Use them. Since you are new and are figuring out what to do my suggestion is to follow a touring plan to make sure you hit all the attractions and don’t fall into the “what next?” trap.

Have a fun trip!

I went in late September when the parks were really slow…didn’t have an EP and still never waited more than 30 mins for any ride. I would imagine that your experience with an EP would be similar.

I made a touring plan not so much for the timing, but as a checklist of things that I really wanted to hit. The app was very good at keeping things grouped together by location, so I never found myself needlessly crossing the park.

If only they made touring plans for HHN, that’s when I really could have used it.