So we did the test this afternoon. Seth got one FP for Epcot at Living with the Land, a tier 1 attraction. After getting on the ride, he tried to get another tier 1 Epcot attraction. The app said he has already used his tier 1 attraction, and only gave him options for tier 2 attractions.

I checked and there are still Mission Space is still available.

One interesting thing: Seth was able to select two FP’s at Hollywood Studios including a tier 1 attraction. This twist was new to me.

I knew that under the new system, you no longer have to physically be in the park that you are trying to get additional FP’s for, but could you please provide some clarification?.. Are you saying that after he used his tier 1 FP at Epcot, he was able to get another tier 1 FP at HS immediately following? (Example: If I reserve 1 FP in advance for Toy Story, immediately after I ride it, can I get an additional FP for Expedition Everest?) Thanks for your patience!

Sorry, I guess AK does not have tiers. Substitute a tier 1 attraction @ Epcot for Expedition Everest in my previous post!

I did not know this was possible, but it does look like you can reserve your 2nd and 3rd in a different park.

Here is what Seth did… 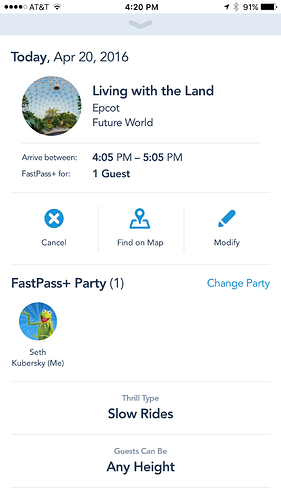 After using the 1st FP, Seth went to book another FP at Epcot. He could only select from Tier 2 attractions: 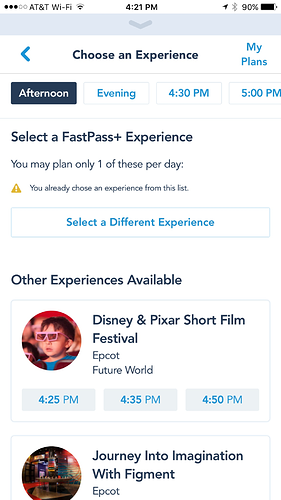 He changed parks, and Seth was able to pick a Tier 1 and Tier 2 attraction at HS: 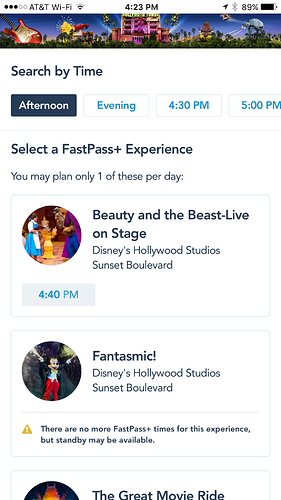 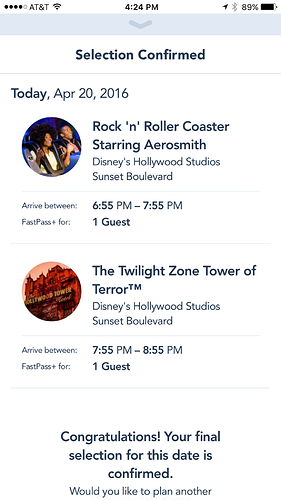 After making the HS selection he switched back to Epcot, but had the same restriction. 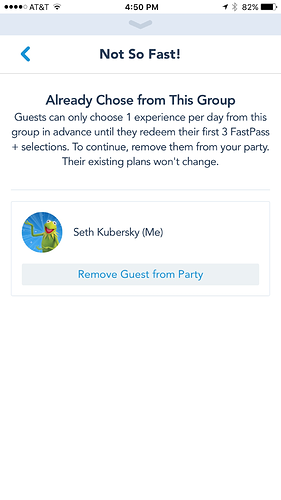 That clears it up for me. Thanks so much for looking into this. We are visiting during June and I am very concerned about same day FP+ availability.

For planning purposes, assume you are only going to get the three initial FastPasses. More FastPass capacity is coming to WDW. The third track at Toy Story Mania (opening Memorial Day Weekend) will add FastPass capacity at Hollywood Studios. Frozen(Opening June ??) and Soarin’ Around the World (Opening June 17) will add capacity at Epcot. Animal Kingdom’s capacity will increase with the extended hours and evening activities.

Thank you for investigating. It’s very useful for when we’re considering park hopping during our trip.

Another question…do you know if under the new system, expired tier two FP windows are treated the same as used FP’s (as it relates to getting additional tier one FP’s in the same park)?

I don’t know. I’ll try to test it tomorrow.

I’ve done the test, and in the new system, a FP+ reservation in the past stays in your “plans.” You can update the attraction or time, but it is not considered used if it has expired. You will have to use two tier 2 FP+ before booking a 2nd tier one.

Thanks again. I appreciate your help.

Hi Steve. Just looking for an update. Our trip is in 1 week. Frustrated with Epcot plans. Visiting park 3 different times just so I can see each of the Epcot headliners with a FP. Absolutely have no interest in seeing Tier 2 attractions more than once. Do you know if it still holds true that while I have to use Tier 2 FPs in Epcot before getting another Tier 1, on that day, I can exchange the advance Epcot Tier 2 FPs for any available attractions in other parks? (i.e. has Disney changed anything since we last looked at this?) Thanks.

Worked for me at the end of May. Soaring in Epcot then TSMM immediately after soaring scanned. I was just a party of one!

Pooh- I’m not aware of any changes.

You could try getting the 2nd tier 1 attraction at a kiosk. If you give this a try, let me know how it works out. I’ll be down at WDW next week also!

I learned about that little loophole on lines and then this thread right before my trip. It worked well for me since I was solo and a desirable same day Tier 1 was available as a single. There might not be as much available if you are trying for a family of 4. Although overlapping FP times could work with a bit of extra effort.

Okay, I again tested letting 2 Tier 2 FPP’s just expire (at Epcot), then using the Tier 1. I did it for 2 different people in my party (each with different Tier 2’s) and for both of them I was able to immediately book another Tier 1 as soon as I had used the first Tier 1 – since I was past the window of my Tier 2’s. I didn’t do a super job taking all the right pics but I’ll do my best to show how it worked for me: This is what I had first off for “Penny” (ignore the The Seas FPP which was fo…

@marciemiwi posted a work around for the expired tier 2. She was able to book another same park tier 1 after using her 1st tier 1 and letting two tier 2 expire. See the attached link for her great explanation of how she did it. No personal experience for myself on this one.

Hey @poohfanclub. It looks like I’ll be following your footsteps in Epcot. What was your experience with Tier 1 FPP’s in Epcot? Did you have to USE 2 Tier 2 and 1 Tier 1 BEFORE being able to get another same park Tier 1? For example, I’m really not interesting in getting any Tier 2 at Epcot. Should I- say- preselect 2 Tier 2s right at opening (and NOT use them as I’ll be enjoying lower rope drop crowds) and try to select my next Tier 1 and soon as I use my first Tier 1?

Hollywood FastPasses @marciemiwi did a bunch of tests and a great explanation in the linked post. You can book 2 tier 2 first thing in the morning and your tier 1. After you use the tier 1 and expire the tier 2 you can follow Marcie instructions for making the second tier 1 (if there is any availability)z

Genius and thank you.

Hi @Sam2071. I’m sorry I am not going to be much help here. Based on the testing that Steve Bloom had Seth do in April (see previous discussion), I was under the assumption that expired FP windows were not treated as used, and the system would not allow you to book another Tier 1 in Epcot until you actually used 2 Epcot Tier 2’s. However, he did say that you can book another Tier 1 in a different park (HS). We just sucked it up and used 2 Tier 2’s before trying for another Tier 1 on our trip in June. I’ve been following recent discussions, and it sounds like other people found a way around it. Good luck! Let me know how it works for you. (FYI, we did our 3 preselected FP’s as early as possible, and had decent luck getting Soarin’ as our 4th.)

3 Likes
How many FP