Hello! We’ve never stayed at either (only at POR)… we’re trying to decide on a nine-night stay over Christmas at CBR Standard or CSR Preferred. We’re leaning toward Caribbean for the Skyliner experience. The Disney Cust. Service Rep. mentioned maybe splitting our stay, but I’m not too keen on wasting time moving resorts. Any thoughts would be appreciated! We’re a family of four - 15, 18 and mom/dad.
Thanks!

I’ve never stayed at either, but based on my research, guests are MUCH more satisfied at CSR Tower Room than CBR in general. If you’re not staying in the tower, it’s probably more of a draw.

In theory, Skyliner is great for CBR. But you have to be in one of the rooms that is closer to the Skyliner, otherwise you will do a lot of walking, which may be ok for your crew.

With 9 nights, you can afford a more leisurely pace using buses from CSR.

In short, unless you are doing a Tower room, I think either option will do fine.

We stayed at CBR two years ago and at CSR-Tower two months ago. The Tower was absolutely lovely and definitely felt more “deluxe” than CBR - and actually more so than some actual deluxes we have stayed in. There are several great restaurant options and even the bus stop at the tower feels more posh. The only reason I would advise CBR is if your family is really excited about the Skyliner and you plan to visit Epcot or HS many days of your stay. Otherwise, @Jeff_AZ is spot-on with the Tower recommendation. If I were you I’d start stalking the site for a Tower reservation for your dates and even split between tower and regular room at CSR if needed. You can hold more than one reservation online until you decide/find what you want. CBR rooms on the contrary felt tired and worn, and the size of the resort made accessing the main building and using the bus system less pleasant.
ETA: And welcome to the forum!!

We’ve always stayed in this quiet area at CSR and been very happy (standard room). The quiet pool isn’t populated but it’s close to both main building, themed pool, pool bar etc. Plus the bus stop is no. 1 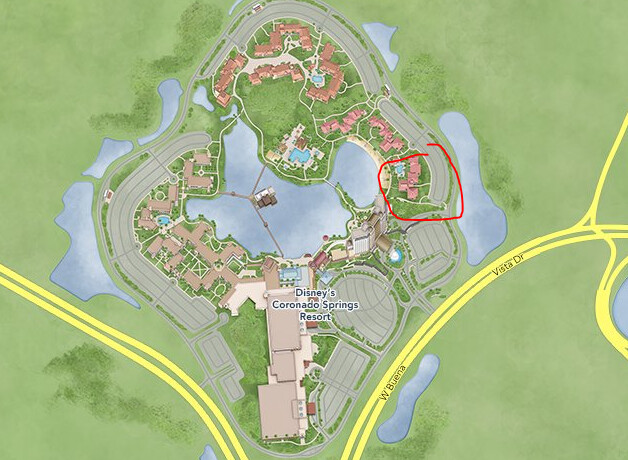 I’ve stayed in a Tower room at CSR. While the room was huge and fantastic and the pool was great, I was not happy about the lack of quick service food. Went to get DS12 a flatbread/pizza at 4:30 and QS place near the tower was closed. It wasn’t going to be open again until 5:00. Evidently it stays closed from 2:00-5:00. The resort itself seemed huge when on the bus back from the mini golf as we had to stop at all the other stops before dropping us off at the Tower.

I’ve never stayed at CBR but have stayed at Pop a ton. You can’t beat the skyliner for transportation to two parks.

This is due to covid. It was never a problem pre-pandemic.

That’s good to know. It was my first time at GDT and was disappointed for that reason. Food at the pool seemed to have more all day service. Toledo was amazing.

Yes, covid messed everything up. CSR has one of the larger QS facilities and at peak hours will fill up w/ ppl spilling to outdoor tables.

The fact that the sinks are in with the shower in the Tower rooms is a deal breaker for us. Hard to get ready as a family when you can’t have someone using the shower while family members are using the sinks.

Sinks are outside of shower area in other areas of the resort. That’s just a tower thing.

True that is a downside. As I recall the toilet is behind a door in separate space. And if they would have just used opaque glass for the shower it would have helped a lot. But, for me (mom) staying with my two teen sons, the bathroom was a minor issue. We loved it anyway.

I’ve stayed at both recently. I can’t comment on the tower rooms at CSR as they are not my cup of tea. I prefer a more resort feel. But CSR as a whole is an amazing resort. It’s got a great southwestern vibe about it, very laid back, gorgeous grounds, one of the best feature pools and the biggest hot tub on property. The food options are great as well (even the pool bar had awesome food, ie: firecracker shrimp) The 3 Bridges really make the resort feel more compact even though it’s a very large resort. I’ve stayed in both preferred and standard rooms. Rooms are the same it’s just the location and the view really. Probably one of my favorite resorts overall.

With that said, on my last trip (2 months ago) I stayed at CBR in a standard room in the Aruba section. (Closest bldg to the Riviera Resort but furthest from the CBR main bldg and pool area) Loved it!!! I simply used the Riviera as my go-to. Skyliner was awesome for HS and Epcot days. Resort itself is similar to CSR except with more of a Caribbean feel vs. a Southwestern feel. The room itself was a little outdated with some minor scratches here and there and some paint peeling but nothing major. The set-up itself was nearly identical to the rooms at CSR. Combined with the food options at the Riviera it’s very comparable to CSR but a slight edge to CSR. Pool area is also very themed and nice as was CSR.

It’s hard to pick between the 2 for me. For a resort only stay I’d pick CSR 9 times out of 10. There’s just something about that place that calls to me. But having that skyliner for easy park access and the bonus food options at Riviera it’s a tough call.

I know a split stay doesn’t appeal to you, but if it were me with a 9 day trip I think you said, I would stay at CBR on the days I planned on going to EP and HS, and stay at CSR on my MK and AK days. You’d only have to move once and you could set it up with bell services so that they transfer your stuff while you’re at a park and when you come back to the new resort you’re stuff should be there waiting for you.

Stayed at both. Skyliner wins for me. The room at CBR was tired, but I was just across the bridge from the Skyliner. It made a difference. I tend to edge towards resorts with multiple travel options. The thing that sold me on the Skyliner was from the middle of HS to inside my room was less than 30 minutes.

Basic room at CSR (not tower) was a much better room having been recently refurbed at the time. However, the bus situation with multiple stops was- meh. I used Uber a lot at CSR.