After this training, all CM’s will be “Geniuses” and be able to make all your wishes come true. (Sarcastic)

So maybe the Nemo theater really is just temporarily closed? Like the just took the stuff out for this training?? I’m definitely not the biggest Nemo fan but it seems such a silly thing to close.

I just read (yesterday???) that the Nemo show is permanently closed.

Well I feel like the “evidence” of that was just that they were removing the props from the theater, not a Disney announcement. So I was just trying to think positive lol!

Oh, see? That’s kind of what I was thinking. You definitely can’t say it is “permanently closed” and also coming back in 2022. These are the things that get WDWNT (among other things) in trouble.

I’m going to go out on a limb here and say the change is probably because Disney wants to create a less performer-intensive version of the show? Fewer cast members would save them money, long term.

They might also be updating it to be more along the lines of Finding Dory?

I hope I’m wrong, though. Look at the Bourne Stuntacular at UOR…it takes the technology for a live show to the next level. Disney doesn’t have anything even close. So to take something as artistically beautiful as Nemo at AK and “dumb it down” would be going in the wrong direction.

I just saw that the cancellation is FALSE (thanks again WDWNT!)

There was no Disney announcement. Just the social media posts of cast members from the show saying good bye. 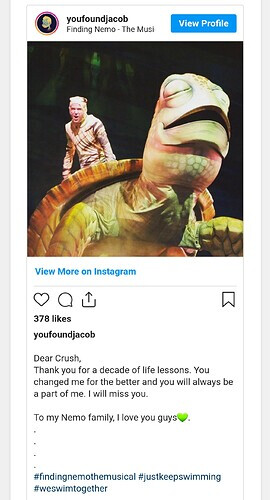 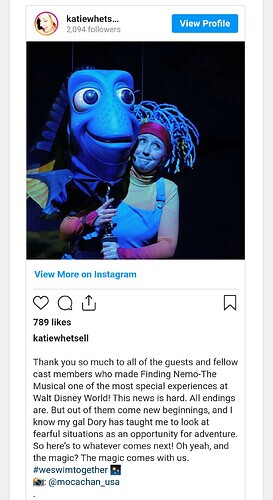 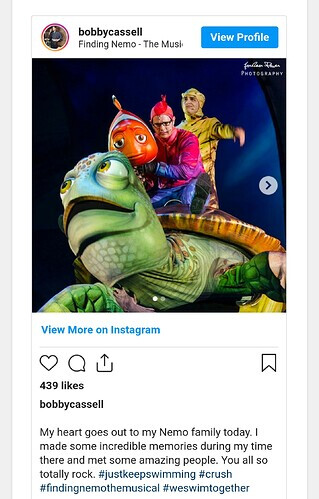 After this training, all CM’s will be “Geniuses” and be able to make all your wishes come true. (Sarcastic)

I don’t know that I’d call it totally false about the original show (as we know it) closing. Lots of speculation about the new show - more puppets? Less human performers in view? Shorter show? Exact name?

WDWNT is worse than DFB. Good grief. They post every rumor as breaking news.

ehhhhh toss up. DFB is pretty bad these days

But we can agree many of these “theme park ‘news’ sources” are awful.

I eventually muted DFB on Instagram stories (I hate Disney sites that post the same stories from last year every day as content), so maybe its just that I see less of them now.

But yes, ultimately, so many of the sources are terrible. I don’t understand the desire to be “first” to break something. As a consumer, does anyone remember where you heard it from first? I’d rather be the source that waits until something is confirmed and then posts so that you are the reliable source. Or at least call out that something is a rumor.

I basically only trust a handful of specific individuals at this point instead of these big faceless groups.