In a shock “Disney IT is the worst in the world” development, my two friends with Samsung 5G phones cannot download the MDE app. They get this: 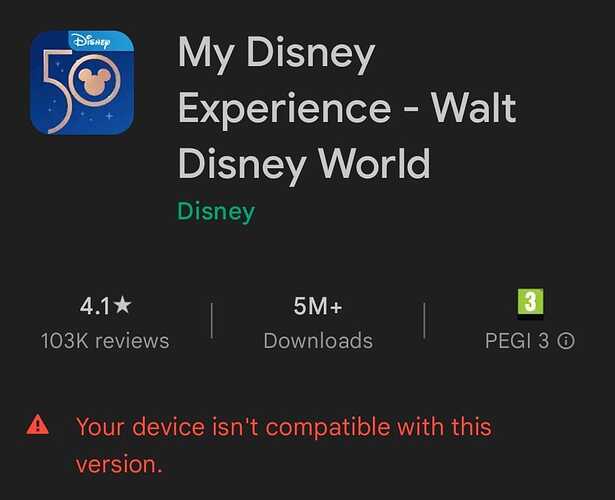 Anyone know anything about this?

I heard this reported on chat the other day with an iphone that was only a couple of cycles old.

That’s what happened with my Samsung too on our last trip (last century it feels like).

It wasn’t that important then, it would be now.

I now use an old iPhone (it’s an SE but the older version of it) and it’s OK.

if you are in urgent need of getting the app (ie going to a park tomorrow), you can download android apps manually from 3rd party sites such as apkmirror. You need to enable installing from unknown sources in your settings. There is always a theoretical risk with 3rd party sites, but apkmirror and apkpure for example are generally considered safe. After you have downloaded and installed the app you should be able to update it via Play store.

Also, some fixes if it’s a bug with Android/Play: FIX: “Your Device Isn’t Compatible with This Version” on Android