When looking to see if our upcoming trip is possible, we are thinking we might want to avoid the busses. We can get to two parks without it, but the other two . . . how challenging is it to get a lyft or uber that will hold 4 adults and 2 kiddos at Disney? Figure one masked driver is way better than a whole bus full of people.

Eh, ignore this. I went ahead and reserved a car to avoid the whole thing. However, son is leaning towards cancelling the whole thing yet again. (Third time!) The Florida transmission numbers are just so ridiculous.

FWIW I would split into two groups - two adults and a kid in each uber. In my experience, easier to get standard car than larger vehicles. Other than that, I’ve never had an issue getting cars.

Thanks for the advice! Will keep that in mind for the future.

This is moot but in case anyone else checks this thread: Uber was reeeally hard to find early in the morning when we were there in early December. We tried to get one back to the airport super early in the morning and there were a total of… zero Ubers. It was extraordinarily stressful. I’d stick with Disney transport or a rental car. (But I understand canceling outright too… sigh.)

I’d agree. I had even pre-reserved a Lyft for going to the testing site when I was there in February and they couldn’t find a car. Had an Uber pick up but then cancel. Finally ended up calling Mears Taxi and it ended up ok.

Getting back wasn’t a picnic either.

People were saying this about California too and while the prices were sometimes ridiculous (like $200 one way for UberXL) they were available always within 15 minutes or so. Based on this and that a rental car costs $500 for a week right now (and I mean a midsize car, nothing fancy) + parking for a week, I cancelled my rental but now ya’ll have me nervous. I have five transfers I need from airport → Universal Hotel → Disney Hotel —> airport (to drop off the one of us leaving super early so this one just 2 people) → Disney Hotel (just one person aka me going back to my family) → airport (for our flight home). I figured five Ubers/Lyfts even with three of em being XL’s would be at least half of the rental car but now I’m worried. What to do?

@SusanKLaw I felt that the DME (so I’d assume now you’re just talking about Mears) was no less safe than an Uber. There is more space on the bus than the plane. I’d just keep that KN95 mask on for anything like planes, busses and indoors and maybe a cloth mask for outdoor lines.

Does Mears Taxi have an app? I’ll go check just in case I can’t get an Uber/Lyft as I think I’m still gonna give that a try. The last couple of times I’ve rented a car, they have like 2 cars to choose from in the National Emerald Aisle…it’s bad there too.

*They do. I’ve created an account and downloaded it. Thanks for this tip!

I would just book a car service for the majority of your transfers and save peace of mind. I’m pretty sure @Jeff_AZ and maybe @PrincipalTinker and at least another liner or 2 has done that recently. I think Quicksilver is who they all used.

I’ll go price that out but car service is usually expensive. Thanks for the Quicksilver tip!

I’ll post how much that is for other’s reference.

Edit: So a three way:

and then in my case if you added in another round trip to from WDW/MCO:

So for me that’s $440 plus tip…not much cheaper than the rental but still probably cheaper when both Loews and Disney charge for parking.

You’re welcome! I wasn’t sure - the guy at the Poly makeshift desk gave me their phone number and called for me. But good to know in the future!!

Jenny, I was thinking we’d want to avoid the busses around Disney itself, too - I heard they’ve been pretty crowded. Pretty sure my kid’s gonna call it off yet again, though. Thought we’d be okay now that the twins are vaccinated, but there’s just so many breakthrough cases.

Yeah, I can see that. When we were there last summer there were still dividers on the buses, and they did not allow people to stand. We were very easily able to get Ubers/Lyfts too though (for example when I was dressed for CG I didn’t want to stand around in the June heat sweating my butt off to get to Contemporary via MK bus).

I also get cancelling. I leave tomorrow and am super worried it’s still not happening!

We’ll be taking these tomorrow AM (which I was able to steal from a friend who stocked up so he could do poker nights). 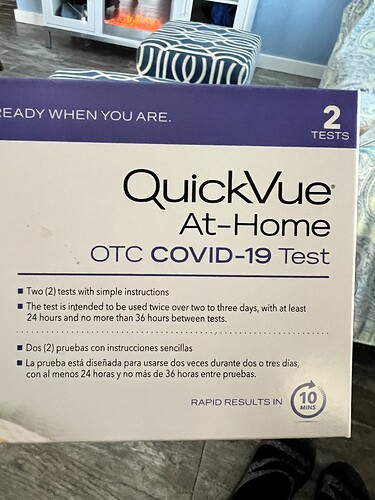 Fingers crossed boosted DS17 and I can pass this test or I cancel it all last min. :-(.

Most of the car services have significantly increased their prices in the last few months. In September we had two groups going to Universal at different times, then traveling to Disney all together, then leaving Disney at different times. I worked with Quicksilver to do one 3 way van (up to 5 for our transfer to Disney) for $205 (this also got my son and his girlfriend to Universal and from Disney to MCO) and a one-way to Universal ($75) and a one-way from Disney to MCO ($75). This was much cheaper than a rental plus Universal parking. I also was able to stop at a store on the way to Universal to get everything my sister forgot.

These days that same booking is about $100 more?

Hmm could you just do the 3 way for all of you and the ones leaving early and then just taxi/uber/left just yourself to the airport for the final trip?

Three of my five days are at MK (two rope dropping Early Entry), one will start at AK and end at DHS, and the other is EPCOT.

I can’t rationalize $80+ extra when I don’t want to deal with TTC, it makes no sense to drive to AK then DHS (return by Skyliner), and EPCOT is all Skyliner.

I did order two different kinds of masks (KF94s and KN95s) to add to my cloth masks… so hopefully that will be protective enough for the eight bus rides and three Skyliner trips.

Maybe you’ll get solo party skyliners too? Where did you rent? I have the Emerald Aisle with National which I love (except in Orange Co. Cali aka John Wayne…don’t even get me started on how crummy that location is) but that’s significantly cheaper than what I could book with my employee discount!

I found the $170+ rental at Dollar, but I decided against spending the extra money based on where I need to go once on property. Keeping my Quicksilver airport transportation and then bus & Skyliner.

I usually rent from Alamo, but they are up around $400+ for five days!

I don’t know if I’ll change my mind, but right now I feel like I never want to rent a car again at Disney. It’s so much easier to have someone else drive you! No tolls, parking charges, traffic, re-routing, etc. Just “swipey swipey” with the credit card and you’re all set.