TP says to get to the gates 60 min before official opening for rope drop. Opening is 9 am for our day (although we have early entry), so we’d need to get there at least by 8 (earlier is better IMO). I don’t really want to use the resort buses because I’ve heard so many horror stories of unreliability, so we were thinking of using Uber and then taking either the ferry or monorail, depending on the lines (preferably ferry). But I’m not sure what time to get to the TTC in order to get to the MK gates by 8? Google says Disney transportation doesn’t start running until 30 mins before park open, which would be 8 am–how can I get there by 8 if transportation doesn’t start til 8?

It’s been several years since I’ve been to WDW, and I just took the bus everywhere last time, so thanks y’all for your help!!

Welcome to the forum!

Transportation starts much earlier than 30 minutes before open - that’s a lie.

According the Liners Handy-Dandy Spreadsheet, lately buses have been leaving resorts starting around 7:10-7:15am to MK for an 8:30am Early Entry / 9:00am Official Opening. (If you are staying on site, I would plan to use Early Entry at 8:30am.)

For mk I would always use the bus. If you are at the bus stop an hour before EE you will be there in plenty of time. Main street seemed to open 30 mins before EE.

Which resort are you staying at?

I did read a report today that the ferry beat all buses (at least today).

Is it also still true that Ubers have a dedicated lane for TTC?

Ubers have a dedicated lane for TTC

Do you mean dedicated to Uber but not for other rideshare? When I was there there was a rideshare dropoff (I used Lyft) at the TTC in an old bus loop - see red circle below. After being dropped off you would walk following the red arrow through security and onto transportation. 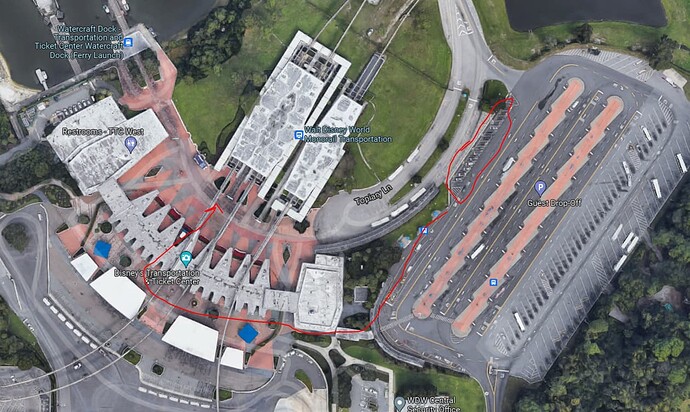 No I mean Uber and Lyft. They were hold back card but allowing rideshares to proceed to drop off.

We’re staying at Port Orleans Riverside, which I’ve never stayed at before

Thanks! That spreadsheet is SUPER helpful! We’re going on a projected low crowd level day, so it may not matter that much, but this is a once-every-15-years kind of trip for us, so we really want to make the most of it!