Before or After: The Great Debate

But now they’re offering desserts after HEA as well as before. I felt the eating portion of my evening would be somewhat rushed, enhanced by a feeling of panic to get to the Plaza Gardens in time to bag a decent spot. (I’ve read on Lines that cast members were actually telling people to hurry up and get out there.)

Clearly the eating will be much more relaxed, and I suspect a lot less crowded as the after party is new and not well known. (Last year I did the before party and it was heaving with people.)

With two parties now running, it seems like the Plaza Gardens viewing area will be busier. Is half an hour early a reasonable time to get there? I’ll be aiming for a spot at the back — I have the impression most people (wrongly!) aim for the front.

This shift has cost me $10, as I got the before party at the old price of $59, and the new rate is $69. But the food offerings look much better than they were last year. All the more reason to give myself longer to enjoy them.

Hmm. This concerns me. From a money-making scheme from Disney, it makes sense. But it seems like this means they will be squishing twice as many people into the Garden, making the advantage it offers less so. I’m curious to see how it plays out. For the price, I seriously doubt people are mostly there for the dessert, but for the fireworks. But if you make the fireworks viewing just another sardine-can like everywhere else, it makes it kind of not worth the dessert. Keep us informed of your experience!

I seriously doubt people are mostly there for the dessert

I would have agreed with that, but they’ve changed the menu to include more savoury items. and new sweet items such as the famous Ooey Gooey Toffee Cake from Liberty Tree Tavern.

That’s partly why I switched my time. I actually want to try the desserts!

The same menu is available at both times. The ooey gooey toffee cake is amazing!

I don’t mean to imply people don’t want the desserts. But would you go and pay $69 for a couple of desserts if it didn’t give you a grand view of the Fireworks?

That’s partly why I switched my time.

The same menu is available at both times.

What I meant was, I switched the time to give myself enough time to really make the most of the food offerings. With the before party, I would have been rushing, and I really only made the party booking to get the reserved viewing area.

I just switched to the after party too! Thanks for the reminder! When I tried to do it online last week, it wasn’t working and said the total charge was $0. It seems to be fixed now.

I’m excited for the later time because we won’t have to rush to get there. And my dinner ADR at BOG may now be feasible. (Yes, I know it will be a lot of food, but we don’t have to eat ALL of it).

We ate at BOG at 545 before the 745 dessert party. We just split a salad and had entrees at BOG, and I didn’t find it to be too much food. I mean you could eat 6 plates of dessert but we sampled a few desserts and I had 3 or 4 chocolate covered strawberries which were the highlight of the offerings at least for me.

Not sure how this works, because we’ve never done it, so maybe you can help me visualize. I must be missing something. This is what I visualize:

What’s stopping a “before” group person from staying with the “after” group?

What’s stopping a “before” group person from staying with the “after” group?

One slight downer. The refund for the before party is being returned to a credit card which I have cancelled since I made the booking. So there’ll be some faffing involved in getting the money back.

That would be ideal. In fact, our ADR is for 5:45, but we’re going in August, after the switch to the prix fixe menu. (Be sure to pronounce prix fixe menu with a French accent as I just did when I typed it).

After having done the dessert party of the “before the fireworks”, this is probably the best move you’ve made. Had I known or had the option to do the eating after, this would’ve been a no brainer.

I didn’t hate the party, but the problem is that it does NOT guarantee a good view because, if you don’t get to the plaza at an early enough time from your fellow party-goers, you end up being behind people and still not being able to see well. So you have to rush through the food and then get down to the plaza garden at an early time, which defeats the whole point of paying for a dessert party.

Being able to see the fireworks and then leisurely stuff my face would have been far more preferable. Now that I know about it, I might even consider doing another one.

(Side note, I really don’t like where they set up the party viewing anyway. For the cost, i believe we should’ve been set up closer around the partners statue)

it does NOT guarantee a good view

My view was only marred by an irritating, self-absorbed, precocious child, wholly undisciplined by her parents. She danced Martha Stewart style throughout the show, constantly criss-crossing back and forth in front of my view.

Naturally, I couldn’t say anything because she’s a child. Dancing at Disney World. I could hardly complain.

I have three little girls and I work very hard to discipline and teach them how to behave. That being said…it’s a work in progress. Children are, by nature, self-absorbed…it takes many years of training them to become people who think about someone other than themselves (I’m assuming…since my oldest is only 8…I don’t know just how long it takes).

I will say that I generally assume that if my child is doing something that bothers someone else but that I don’t see a problem with (like running around in grass, playing in a fountain, climbing a tree, etc.) that that person will ask them to stop and explain why, or ask me (nicely, of course) to ask my child to stop and give a reason why. This girl’s parents may not have known that their child’s behavior was bothering you, in which case they would probably appreciate a kind, “Can you please ask your daughter to stop running in front of me? I can’t see the show.” Or they may have not cared, in which case it would be appropriate to be annoyed with her parents, not with her. It is rarely a (young) child’s fault that his/her behavior is bad: the blame falls solely on the parents.

the problem is that it does NOT guarantee a good view because, if you don’t get to the plaza at an early enough time from your fellow party-goers, you end up being behind people and still not being able to see well.

I have questions about this having just booked our first HEA dessert party. Is the “rush” to get out and get a good spot just so you won’t be behind other people, or it is so crammed in the space that you are sandwiched in front to back and can’t move around?

My family is all tall and will have no problem if the issue is just seeing over the top of someone else. However, I purchased the ticket thinking it would save us from being crammed up next to other people pushing and shoving. Can you clarify more?

I am judging by @profmatt’s comment about the little girl running around that there must be a fair amount of open ground if there was enough room for the child to run.

My family is all tall and will have no problem if the issue is just seeing over the top of someone else.

I’m concerned about the height thing. My wife is only 5 ft tall (on a good day). I’m 5’10", so it generally is okay, but she is behind anyone and she can’t see. (This happened to us the last time we were there to see the fireworks)

In my experience, sorry, we were crammed in. It’s a tad better than being “in the wild”, but it’s still not anything close to what I would call “being able to move around.”

There isn’t any pushing or shoving, though.

If you get down early enough, you can grab a spot by the fence, which should give you some decent viewing area, but the walk way has its own reserved area (for a different viewing party, I believe) and they kinda block the view a bit as well.

I’ll post a photo of our view. It’s certainly wasn’t BAD… but then I didn’t leisurely eat through the food so that it wasn’t. I also am fairly tall, so I was personally fine so long as I was standing, but if I sat or if you were my mom, who was in a wheel chair, it took some positioning to be able to see the castle instead of people, shrubbery, or light poles. ANd even then it wasn’t a resounding success, that one speaker definitely was seen. 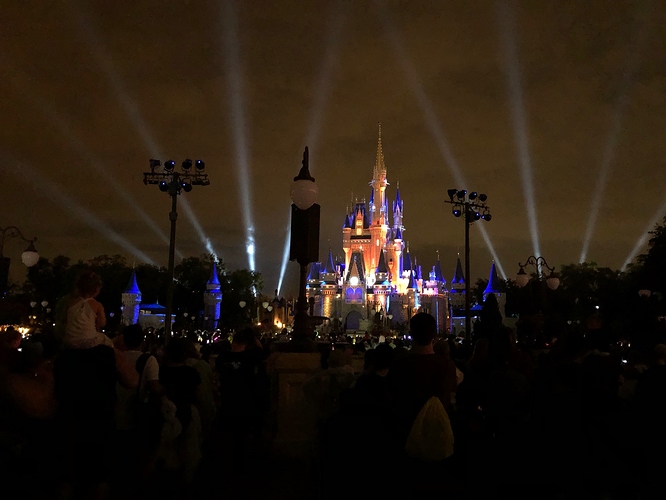 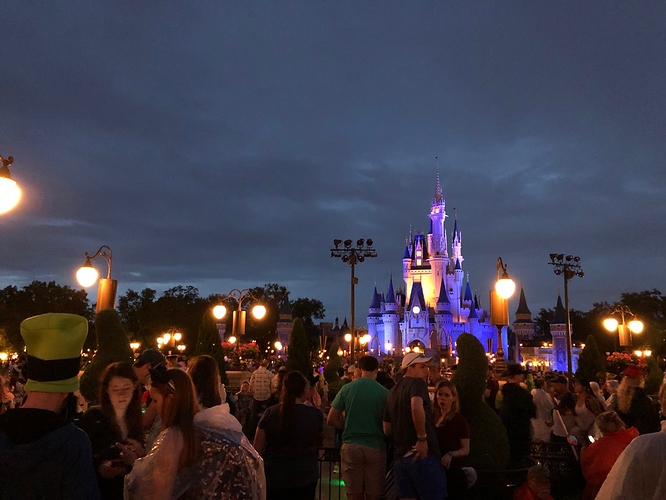 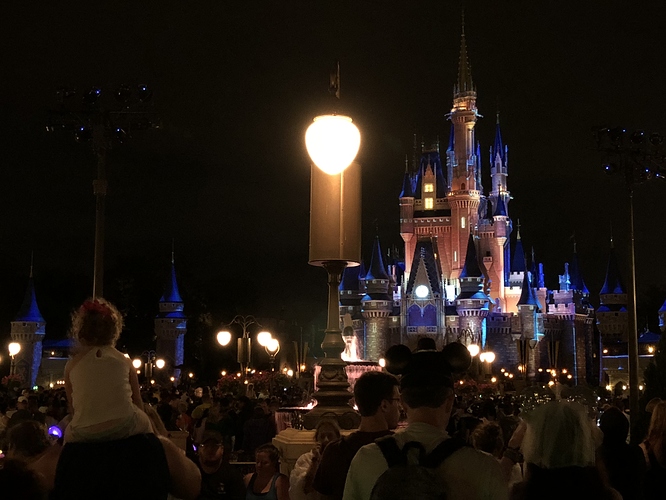 there must be a fair amount of open ground

we were crammed in

I think there must be some luck in involved on any given night as to how many people have signed up. I was worried because the dining area was absolutely packed, yet the viewing area was surprisingly open — certainly nothing like the pictures posted by @Randall1028