Be Our Guest Breakfast Questions

We have 8:10 AM reservations at Be Our Guest on a day where there is no early morning hours at MK. I have a few questions: 1) Can you split a meal or does everyone HAVE to have their own meal? 2) If everyone has to have their own meal, is breakfast at Be Our Guest worth the $27 a person cost? 3) Can you get some pictures of yourself in front of the castle without anyone in the background since you’re in before the crowds?

Thanks in advance for any insight you can provide!

As of today you can split meals. Last month when I was on the dining plan a BOG breakfast and mimosa was a great QS value! 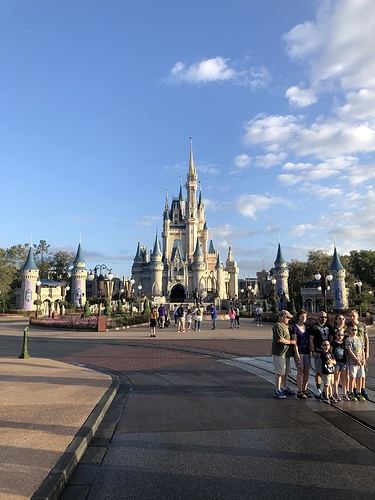 Get there early for the pics. the closer you are to the front of the pack going in the better chance you have. I believe they let you in between 7:50-7:55, depending on when they are ready. It is not a cheap breakfast but still a great place to go.

Yeah, the key is “as of today”. The intent was for it to be a prix-fixe with a flat fee for adults and a flat fee for children. They have not enforced it to this point, resulting in people booking ADRs for their entire party and buying one cupcake or cup of coffee. This being Disney, at any point they could do the math on what they are bringing in vs. what they are having to pay in operations cost and decide to enforce the prix-fixe intent.

If they intended it to be prix fixe, why would they make it QS? If they are going to do that, then they would need to change it over to TS and would make some kind of announcement about the change as they did when dinner was changed to prix fixe. With that being said, when we went I didn’t see anyone not have some kind of breakfast food on their table. You can split meals, however I thought the portions were pretty small for the price. I wouldn’t do it unless we were on the DP, which was the case when we went last trip.

Well, the announcement when they added breakfast said it was pricey fixe New Breakfast Starts March 20 at Be Our Guest Restaurant in Magic Kingdom Park...

Starting on March 20 Be Our Guest Restaurant in Magic Kingdom Park at Walt Disney World Resort will begin testing a prix fixe breakfast from 8-10 a.m. daily through June 18.

This article says it was a test. It must not have been successful.

They never enforced it TO test it.

It was serving breakfast that was a test, not the prix fixe part.

The test was breakfast.

After almost 4 years I don’t think Disney is going to change from QS to prix fixe without giving people the chance to cancel reservations if they don’t want to participate. They made the announcement for dinner so they can make an announcement for breakfast.

I don’t get what you’re arguing about. Yes they would have to make an announcement. They could do that tomorrow, saying you have to order an entree for every person on the reservation. There you go, it’s prix fixe. Nobody is saying they would change it and not announce it.

I’m not really arguing. It was said earlier that Disney is allowing sharing and that could change at any point. I would think Disney would give more advanced notice than just walking into the restaurant and it would suddenly be prix fixe because in 2015 it was announced that way. I was simply saying that I didn’t understand why Disney would intend something was prix fixe and then make it QS and then switch it suddenly to prix fixe again. That doesn’t make much sense. I digress and am moving on.

d it would suddenly be prix fixe because in 2015 i

I think the point is that the meal was always intended to be pricey fixe. That is what you have now. You order an entree and the drinks are included. Some menu items have changed and with preorders and self service they never tried to monitor or enforce it, but they can. My original answer was “for now”, @lizzieanne771 pointed out that could change. Disney saw dinner as lost revenue when guests did not eat. It is rather surprising that they have not enforced it. We all thought we knew how fast passes work. Many people booked split stays knowing they could book fast passes for their whole stays . That changed…

We ordered actual meals for my parents (quiche and oatmeal plus coffee) and cupcakes for my daughter and I. There was no issue with this. We had 2 actual reservations so we asked that they only give us one pastry service for the table (they usually give one per reservation but that seemed like a waste of food). The $27 seemed like a lot of money for breakfast but it was nice to get into the park early, see inside the castle, and get on 7DMT without using a FP. That being said both my parents were surprised by how much they enjoyed their breakfasts. My daughter and i loved the cupcakes and the “grey stuff”! You could get some great pictures without other people in them but my family was not cooperative!!!