We are looking at something called a Go Pass that gets you into several experiences for as many days as you pay to use it. The reviews are mixed with some loving it, and some being frustrated by how complicated it is and not getting enough value with a lot of work.

I think it seems like a big hassle. The Go Pass works well in some areas, but I don’t know about Oahu…

We know that if we buy it, we will go to as many places as we can and may miss out on some of the other more chill things to do

I would think this would be a problem. I know I’d want to “maximize the value”.

So many Groupon deals for a catamaran. They are all your basic booze cruise, where you have to pay your own drinks… They are ok but if you do a dinner cruise, a whale watching cruise, or a snorkel cruise, that’s all you “need” unless you really like being on the water.

I don’t know what tour is included with the GoPass, but some of the more cool Kualoa tours are probably not. I like the movie set tour, but I hear most good things about the ATV tour (for if you want to get SUPER muddy).

Unpopular opinion, but if you do a luau, don’t do the PCC. It’s gonna be awfully repetitive. Each country you visit at the PCC goes through their traditional dance and other cultural explanations- very interesting, but it can be a lot. And the PCC takes all day long, and the food there is VERY expensive.

all of the Pearl Harbor museums

Again, you can totally pick and choose WHICH museum you want. If it’s just the best one (the Arizona) and you get the reserves spots somehow (they fill up quickly- there’s some booking 3 days out at 7A or something, I don’t know the system)- anyway the Arizona is free, basically. I think it’s a 3$ booking fee or something. The USS Missouri is interesting, and the Air Museum is too, but if you’re not SUPER into military history and Pearl Harbor, you may not want to spend the time.

Free. They have a $5 suggested donation, maybe. It’s awfully muddy up there if it’s been raining. It’s beautiful, but if you go to Waimea Valley you’ll see the same thing.

Do you mean the Iolani Palace? That is worth booking separately bc you want a tour. They have an audio tour. This talks more about the overthrow of the Hawaii kingdom, so it’s much more Hawaii cultural history. Very interesting, and worth it to us. But I think easier to book directly through Iolani.

LOL. This would not appeal to me at all.

Kayaking is fun, but in the winter months the best place to kayak is often unsafe. They usually don’t recommend if the wind is over about 15mph. It’s a lot of work also!!! So only if you really really want the workout. Again, great Groupons can be had for Kayak rentals, or even (what I prefer) a guided Kayak tour!!!

Hmmm, conditions have to be just right. I’m guessing they rent it in Waikiki or something but the best place to rent is right in North Shore/Haleiwa where you can go into the river area, where you frequently see turtles. Otherwise, I would not want to SUP. If you’re a super awesome SUP person, by all means tho.

LOL. Free. There is a “train tour” and a “pineapple maze” and a “garden tour” and at an upcharge, but those are not important or necessary. The train is my favorite of the 3, but you can walk the grounds and see the different varieties of pineapples growing, and get your fresh dole whip at the store, without paying any kind of entrance.

Not the best Luau.

Also the GoPass doesn’t sound like you’d have a lot of down time or flexibility for hiking or anything like that. I’d pass.

We loved the Toa Luau.

I thought to post this here because this is a group looking for hotel deals. I have used Autoslash in the past to help with rental cars. Looks like they are stating up a “Hotel slash” that will be paid BUT if you sign up now it will be free to you forever. I signed up and ran some of my Hawaii dates and the prices look very good. In case anyone wants to take advantage this is the email language:

"Here at AutoSlash, we’ve spent more than a decade helping travelers get the best possible car rental price. Now we’re thrilled to do the same for hotels with our brand new site, HotelSlash.

How to get started: We’re currently offering early access exclusively for AutoSlash customers. Once we launch to the general public, we’ll be charging a membership fee. But anyone who signs up now will always have free access to HotelSlash for life. As in forever.

To sign up, just click here. If you’ve previously used HotelSlash, then you’re already on our “forever free” plan. But if not, don’t delay because this offer won’t be around for long."

Thank you for all this detail!

We loved the Toa Luau

@Dreamer and @Peggy808 - we have decided to do the Toa Luau. Any thoughts on the 1230 show or the 5pm show? And how about which package to go with? Gold seems good unless you get way over on the edge, so I’m not sure.

We did gold and had a good view. Just a bit off center.
We visited the valley before the luau so we must have done the 5 pm show.

Ahhhhh! 4 days and a wakeup until we leave (Wed). 6 hour drive to Minneapolis for our first official night of vacation, and then we wake up and fly out of MSP (11:40am Thur). Then 12 hours later, we land in Hawaii (8pm)! I am so excited my heart starts racing thinking about it! I may have had too much coffee today. Hahaha
I also may have ordered way too many cute summer shirts from TJ Maxx online that are arriving today…most of which I will have to return when we are in Minneapolis. I just get so excited!! hopefully a couple of the shirts work out…it’s just fun to have new clothes for vacation, right?

5PM!!! I was talking to some of the workers up there the other night when I was there for another event, and they recommended the night bc although the shows are identical, the fire dance is much mo bettah at night. Which makes total sense, and the fire dance is the highlight of any luau to me!

As far as seating, I’m probably gonna go with silver.

I also may have ordered way too many cute summer shirts

Don’t forget to pack for cooler weather!!! Nothing crazy- but I definitely carry a sweater with me for the AC in restaurants, and at night when it cools down.

I have been debating whether to bring jeans, capris, both?

It’s 10 degrees Fahrenheit here right now, and it looks like the lows will be 71 when we’re there, so I can hardly imagine wearing anything but swimsuits, shorts, and tank tops! Ha
I think that’s mostly what I’ll wear and then just add a jacket or sweatshirt for mornings and evenings if it’s chilly.

The next thing I’m looking for is where to go for body boarding this time of year. I was able to get 2 body boards as an extra with our Turo jeep rental.
We love to body board at Daytona, and we’re both fairly strong swimmers…although I have to remember I am getting older and am not a 17 yr old lifeguard anymore! Ha!

am getting older and am not a 17 yr old lifeguard anymore! Ha!

This is the worst reality to wake up to! Have a great trip. So excited for you!

Today is the day! We fly out at 11:40am CST and arrive in Honolulu at 8pm Hawaii time, which is 3am CST. That’s a long day…hoping to sleep through some of it. 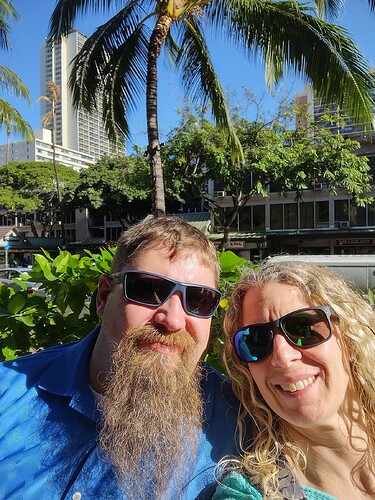 I’m impressed to you slept it. Even my kids were awake at 5:30 am the first week we were there.

Get shave ice from Island Vintage. It’s right there at the international market.

Haha! Yeah, we were short on sleep before we left! It was amazing to feel like we slept in, but not lose a whole day of vacation!

Tree inside the International Market, which is kind of open air with a roof… 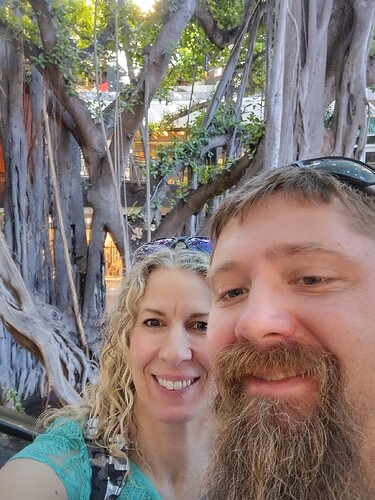 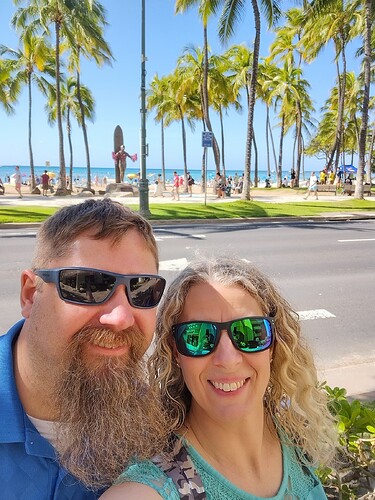 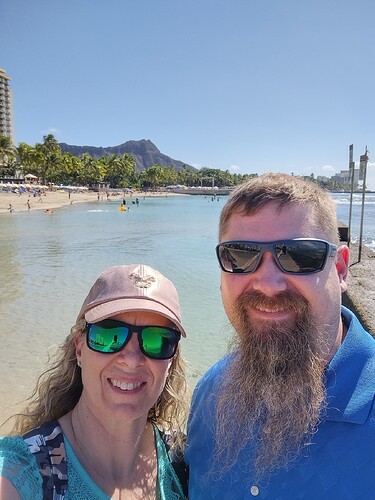 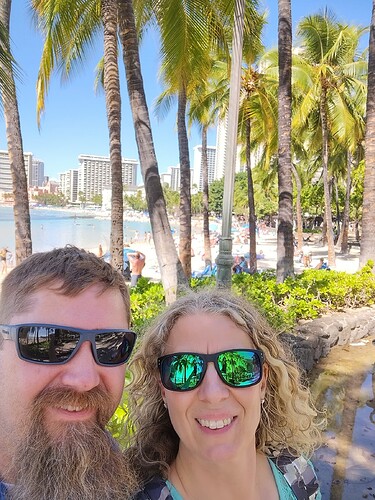 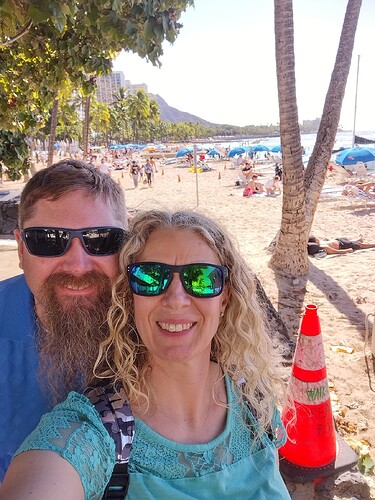