We had an early start to the day because of an 8:20am ADR at Hollywood & Vine. We are a family of sleepers, so I was incredibly surprised that we made it out the door of the hotel by 7:30am. We ended up walking from YC to HS, which took about 20 minutes. This was the first error in my planning – I didn’t realize that the boats wouldn’t be operational that early. Fortunately, I asked at the front when I went down to get coffee, so I had plenty of time to adjust the plan. We live in European city and don’t have a car, so we’re used to walking and it was a nice change to get some exercise instead of driving everywhere as we’ve been doing during our long US trip. And definitely more economical than the Minnie Van the CM suggested.

We arrived about 7:50am and were let into the early ADR almost immediately. I promptly took my son to sign-up for Jedi training and we had our pick of time slots. Rain was threatening that afternoon, so I thought about picking an earlier time, but I ended up sticking with our plan of 12:40pm because I had worked my TP and FPs around it.

Back at Hollywood & Vine we had a very short wait for our table. We ended up at a table right by the buffet line, but with a divider wall between the two, so it wasn’t too loud or crowded. Our position was great because we were the second table each character came too. We were barely seated when Handy Manny came, and then the rest quickly followed. It was nice because we finished with all of the visits quickly and had time to eat our food in relative peace. DS is pretty much outgrown the Disney Junior characters, but he was still excited to meet them. And DD1 was once again intrigued by the characters, especially Doc McStuffins and Sofia. We were out the door by 8:55am and could have moved faster.

DS is only 6 and since this was his first time in a big amusement park, I wasn’t planning on doing the big roller coasters, especially early in our trip. I’d planned for a ride on TSMM followed by the earliest Disney Junior show with DS and DD while DH did RnRC and ToT. But, a CM we’d chatted with mentioned RnR to my son and he was stuck on the idea. I had FPs booked for TSMM later in the day, so I gave him a choice between RnRC or two rides on TSMM. He picked RnRC.

We headed over to RnRC and already at 9:07am the posted wait time was 35 minutes. DH and DS jumped in line and the wait was probably just under that. My son LOVED it and wanted to ride again with me using the RS pass. At the end, he decided that he’d already had too much excitement for the morning and decided to pass on ToT.

I had reshuffled the plans a bit, but we headed over to the Launch Bay and stopped for some photos on the way. We met BB8 (30 min wait) and decided the line for Chewy was too long at this point. Next we headed over to TSMM to use our FPs. DS had fun, but was frustrated that he didn’t score more points. I think a second ride would have been great, but oh well. After TSMM, we did the Cruz Ramirez M&G with a wait of less than 5 minutes. The wait for Buzz and Woody was nearly an hour though, so we passed and headed over for Jedi Training.

I used the wisdom of other Liners and managed to get my son in the line to fight Darth Vader. While I had the info noted in my plans, I was confused because I’d read that the line in front and closest to the lake fights DV. Honestly, I was confused because the lake is on the side. Anyways, the front line that is facing the waiting area fights DV while the line by the back wall fights the 7th Sister. I double checked a post on the forum and quickly directed my son to sit in the line in front. All went perfectly. Jedi Training was awesome, but it was HOT. When my son went up to fight DV, he said, “I’ve been waiting for you” to DS in his scary voice. It was awesome. Again, it was HOT. The CMs even passed out wet towels for the parents, which provided a little relief. If it’s summer, I’d definitely recommend avoiding a midday shows because of the heat. 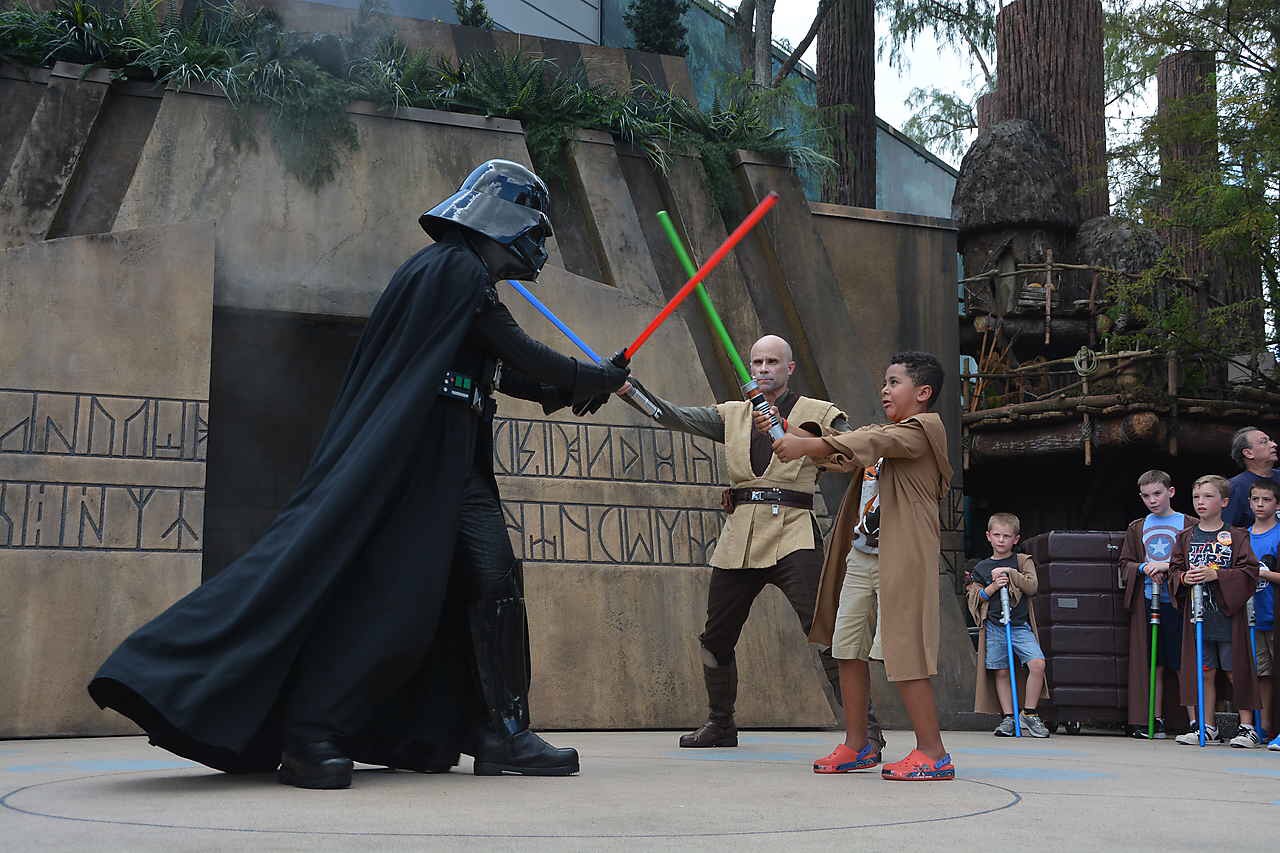 After Jedi Training, we rode Star Tours. DS first went with DH and he was so excited. He has said that it was his favorite ride of the trip. Then I rode with him and he was the rebel spy! It was so cool. In the store afterwards, he told a CM that he was the rebel spy and she made a special button for him. In between rides, DS built a light saber, something he had been looking forward to for months. I have to admit that it’s pretty cool.

Next, we had a late lunch ADR (2:05pm) for Sci-Fi. It was super fun inside and we found the food to be more than decent. My DH really enjoyed it and thinks it was among the best of the trip. I guess low or no expectations are good sometimes. 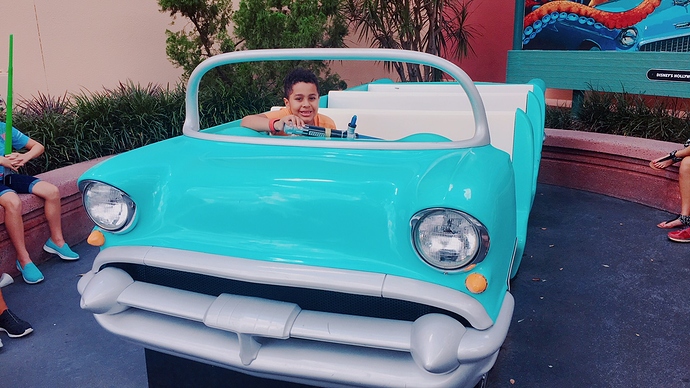 We had planned to see Olaf next, but unfortunately, the Frozen show had just let out the CM warned us that the wait was actually about an hour even though 15 mins was still posted. That was far too long for us, so we called it a day for now and took the boat back to YC.

Although we had booked the Fantasmic dining package with our Hollywood & Vine breakfast, I was planning to skip it and spend the evening in Epcot instead. We were on the dining plan, so the breakfast was one credit with or without the package. But, my son was still mesmerized by Illuminations the night before and was interested in seeing another show. So, we took much needed naps in our room and headed back to HS at 7:35pm for the 8:30pm show. We arrived around 8pm, so sped off towards the theater. We grabbed some food from Fairfax Fare on the way in (a decent and huge pulled pork sandwich with fries and the all-important beer) and quickly made our way to the reserved area. We had no problem getting good seats – there were plenty of open seats in the middle of rows. We were about halfway down and in the center, which I think was a perfect position and I loved that we didn’t have to arrive that early. Everyone loved the show. I don’t know what I expected, but I thought that with a running time of more than 30 minutes, it would be a bit boring, but I was wrong.It was great and definitely worth a trip back to the park, in my opinion.

We stopped to catch a glimpse of the SW fireworks on our way out and then joined the masses exiting the park. The line for the boat back to YC was massive, so we decided to walk again. DD cried the whole way in her stroller. And fulfilling my son’s continual request since we checked in, we made a stop in the arcade on our way back to the room.

Has Cruz Ramirez replaced the Guardians of the Galaxy m&g? This is the first mention I’ve heard of it.

Thanks for the report. Due to my son loving star wars we cannot wait to go to HS next year…although 2019 would have been better when the land opens… ho hum…thanks for the jedi tips they are useful

I’m not sure, but Cruz Ramirez was outside of TSMM, to the right when you walked out and on the same side.

Great picture of your son fighting Darth Vader!
We really enjoy Sci-Fi, too, especially in the summer. It’s a good break being dark, cool and quiet.