At what point do I give up?

FWIW @mousematt, I think you made the right call. The uncertainty would cause you too much stress.

That’s also why I haven’t done anything more than rebook our DVC reservation from Christmas to Easter next year. Not doing anything else about the first week, flights etc.

I think you made the right call

I really think I have. There were actually quite a few reasons why going in August wasn’t a good plan.

And I’m feeling genuinely excited about my cruises now.

You’re going to love cruises. Just my prediction. I genuinely hope I am right. Hang in there friend.

about my cruise s now.

It might be your fault I’ve been watching cruise videos and doing mock bookings the last 60 minutes.

Pretty soon I’m going to have to jump in my kayak here on Long Island and paddle across to pull a reverse-Dunkirk to just bring you over.

On Sunday evening I was listening to a pretty balanced political podcast debate about whether or not Japan should cancel the Olympics. It seemed very clear to me that they should. First, the risks didn’t seem to match the reward. Second, they just won’t be the Olympics that we’ve come to expect. Though athletes would be disappointed by the cancellation, they would also surely be disappointed by the empty sterility of the experience if they do take place.

It immediately occurred to me that this same argument applied to whether or not I should (attempt to) go ahead with my August trip this year.

My principal reason for wanting to go to Orlando in August was that August was soon. The arguments stacked against August were many. Concerns about the apparent “COVID is over” attitude of the parks and their guests, the continuing lack of the full experience, the fact that many new attractions are not yet complete and operating, the UK and US testing and quarantining requirements, the possibility that I could test positive for COVID in the US and then be denied boarding home.

So, a day later I still feel my decision is the right one. And the relief of the stress of “will I be allowed to go?” has certainly made me feel a lot lighter.

I’m excited about my alternative plans. I’m still a little anxious about whether they will really happen, too. (I was the same with my DLP trip last August. I didn’t believe it was going to happen until the plane took off.) But I think they will in a way I didn’t (and still don’t) think the Orlando trip would happen.

For those interested, I’m going to add the second cruise to my my trip report thread.

I didn’t read everything yet, but to answer what you said about USA being all back to normal…it really, really depends on where you are. Where I live they just lifted the statewide mask mandate a few weeks ago, but in my county only a few days ago. I had several errands to run today and saw maybe 9 of 10 people still wearing masks indoors. And, I still didn’t see a lot of people shopping. For myself it was the first time inside a grocery store in about 6 months, ever since online grocery became something you could actually get in a reasonable time frame (pandemic time). I do realize that what I’ve read about FL seems to say that people there have been acting back to normal for some time. Friends and family there had their kids go in person to school all year, for example, and mine never went back one day—and, we only had the choice since mid-April. I am on the cautious side and my household is still going to double mask, as we’ve been doing a long time, until my DD9 can get the vaccine. At least until then, b/c like you we’re worried about the variants. I won’t hazard a guess about where international travel is going to be in a few months, but to me the US is opening up too quickly in places. As much as I’d love to visit WDW or similar I still don’t feel necessarily comfortable going to the Six Flags that’s 15 min down the street. I agonize about that one almost every day, b/c I want to enjoy the water park this summer, but…my DD9 is unvaccinated.

What’s the date on that chart?

Incidentally, the latest COVID figures in the UK recorded zero COVID deaths for the first time since the pandemic began. This is slightly misleading as it refers to a long weekend day when the numbers go down anyway. Nonetheless, it’s a milestone.

I think it was yesterday…let me get the link for ya’. 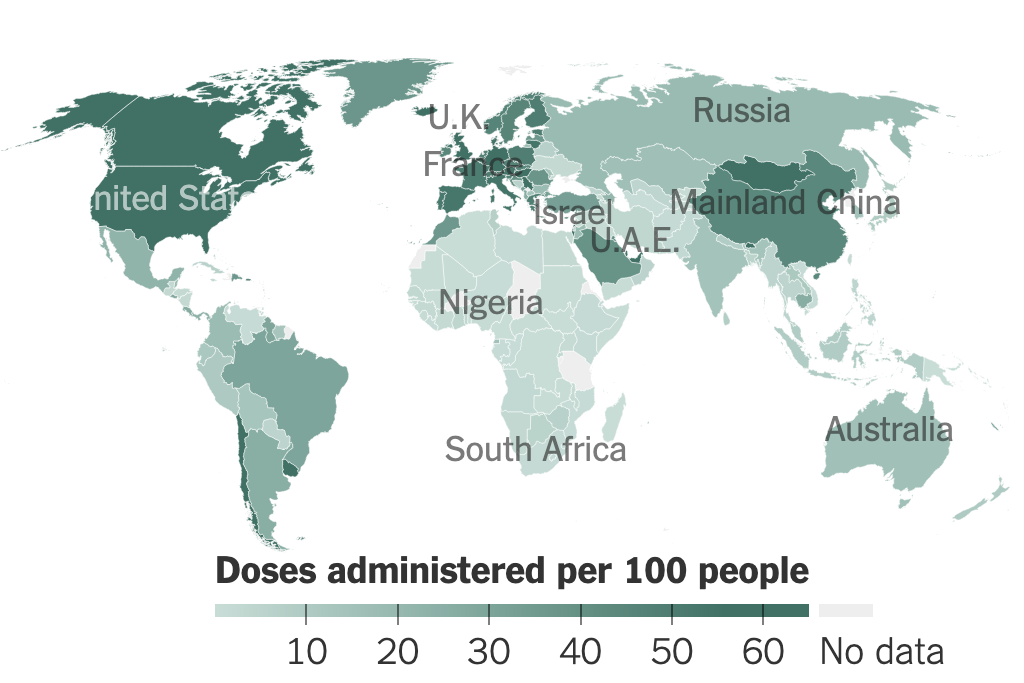 Tracking Coronavirus Vaccinations Around the World

More than 1.93 billion vaccine doses have been administered worldwide, equal to 25 doses for every 100 people.

Can you make a stop in Canada?

With the quarantine for air travel in place and the land border closed, I will confess to wondering today how long it would take to canoe from Toronto to… is there a river between Titusville and Orlando?

What about a dragon boat? I’ll put my kids to work. They don’t have anything to do with the latest announcement re school.

You’d have to portage from Titusville to Orlando.

For what it’s worth, we’re in a similar position. 3 weeks booked at GFV in August and facing likelihood of cancelling for the second year in a row.

The UK Gov will bring in the new travel lists on Monday and then update again on June 28. Because we’ll face the DVC points going into holding if we leave it much later, that’s my cut-off. If there’s no agreed UK-US air corridor at that point it’s postponing to 2022 and another mad scramble to find somewhere in Europe…

If you want the full experience (right now, no fireworks, questionable mask use by non-vaccinated, very few live performances/shows, no meet and greets), I’d wait until later in 2022, if I were coming from out of the country, honestly. Also if your friends are only going to be able to go once, they should be able to experience the entire world, including all the restaurants they want to enjoy. WDW likely won’t be fully back to everything working until next summer.
As a side note, your country’s numbers are similar to my state’s numbers (TX), and we have a population only about half of the UK. There is much less mask compliance here. If you or your friends are not fully vaccinated, I wouldn’t come.