Disney IT person recommended we get a slot for Astromech. Only available slot on our day 3/18 is 750pm and park closes at 8pm as of this writing. I figured that would be perfect because then we wouldn’t have to carry it around and could take advantage of riding rides most of the last couple hours the park was open but now I’m reading that you want them during the day so they can “interact” with things in the park.

My 10 yr was BB8 for Halloween a few years ago and I think they’d both love the concept of having a droid and getting to “build” it moreso than a lightsaber (plus frankly they are close in age and are either besties or fighting so I don’t need to buy them something that would give them an excuse to slay each other) but some reviews on this were pretty…meh. I understand it’s pretty simple and only takes about 15 minutes.

Worth it? Are personality chips more $? Any tips? Should I keep an eye out and try to do them midday instead so they can “interact” in the park as we go or is that not really worth the hassle of carrying it around all day and stowing while on rides etc? Any particular personality chips that are more desired or combinations that are more fun to combine (since both will build and they will interact)? Or should we skip this and just enjoy the day without this last minute activity? Also, I got a timeslot for 1 at 6pm, what are the odds they would take them both then if I talked to a CM? Didn’t know if anyone had been able to add a builder to an existing reservation or combine separate reservations at this experience…

My 9yo daughter liked it even though she isn’t particularly into SW. It’s a fun process and the droids are cool, both of my kids have theirs on display, my son occasionally plays with it. I did ask them both before hand if it’s something they want to do as it’s not cheap, we watched a youtube video of it.

As for using it around park, this is just my opinion but I didn’t see that as that special or interesting. There is an area where you can play with them but otherwise the interaction is really just them beeping and booping at some locations. We took them out once for the play area and then lugged them around in a backpack for the rest of the day.

As for the extras, we didn’t get anything, I think its a lot of $ for just basically changing the noises they make.

I have a ten year old daughter and a 12 year old son who recently made droids, and they loved the experience. They play with their droids a lot together at home, and the droids are really cute when they interact with each other. We carried them around for a little bit. They came on Rise of the Resistance with us, and did beep and boop at a lot of the features. Out in the land, it was kind of too crowded to do anything with them, but the kids thought it was hilarious when they’d start to “talk” and move around in the boxes. We had a van, so we just took them back to the van mid day after we were done carrying them around. It was fun to see them react, but also they got heavy.

We got a time slot for two at 7:50 PM I had also seen a 6pm for one but I’d also like to score an ADR and figured they probably wouldn’t let us build 2 on a reservation for 1 so bailed on that idea.

@jleh this is awesome thanks! So what exactly do the personality chips do? Like if we don’t get them how is it different?

So what exactly do the personality chips do? Like if we don’t get them how is it different?

Ha, wish I had done my research before being forced to make a snap decision at the register

. In the end, the droids just emit tones and beeps, and my understanding is that the droids still do that without the personality chips - just that the chips make them emit different pitches in different parts of Galaxy’s Edge?

Disney’s website doesn’t give much information on this, but found this blog from a quick Google search: 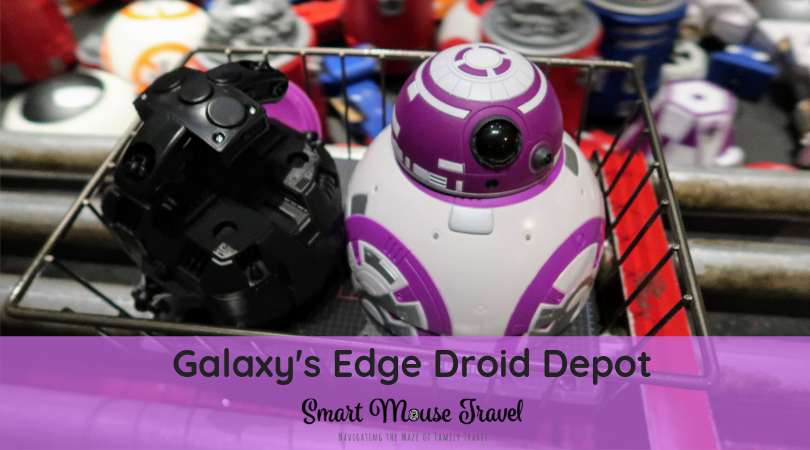 Building a custom droid at Galaxy's Edge Droid Depot is an incredible way to become part of the Star Wars story in Black Spire Outpost.

This was great thanks! I’m not opposed but especially if we make them 10 minutes before close not sure how much park interactive time we would have on the way out. Our other option was 9am (park open 9am) but I didn’t really want to have to carry them around all day or lose the first hour touring time (we will try and be there for RD but still…). Anybody know if they are super strict on reservation time? Have they been allowing walk ups or wait list for this?

It really depends on the day, they have done walkups before and have also allowed two people to build even though only one had a reservation. Also, we were about 10 minutes past our time slot but got in without a problem, this was a fairly busy time too. But again, all of these scenarios depend very much on how busy they are, how the CM handles it etc.

We did this with our 4 and 6 year olds, and I don’t think it’s worth worrying about doing them earlier so they interact - they just beep and boop and move their heads. Actually you might be best off doing them right at the end because then you can take them back to the hotel and drive them - my six year old, in particular, wanted to spend the rest of the day at the little practice area.

Oh, and I think the personality chips just make them do different beeps, and maybe affect how they “react” in different areas of the parks. We got them but I wouldn’t say it’s worth it.

Yeah this is exactly what I’m thinking. Mine will want to play with them and while they will say they want a particular chip it won’t matter.