Are the adult beverage tastings worth it anymore?

My booking window opened a couple of weeks ago and I rushed to salvage the resie scraps that were available being a newbie cruiser. Now, with a cold head, I’m beginning to wonder if the tastings are even worth it in 2022 given that they are twice as expensive as before. All the old reviews seem to focus how it is a good deal despite drinking “supermarket” alcohol. My local wine shop offers killer tastings for just $20 and I don’t know if I want to waste $45pp to get a sip of Barcardi or Barefoot-like wine just because “it’s Disney”.

Any thoughts? What am I missing?

Here is a comparison of the new prices that went into effect sometime this year. 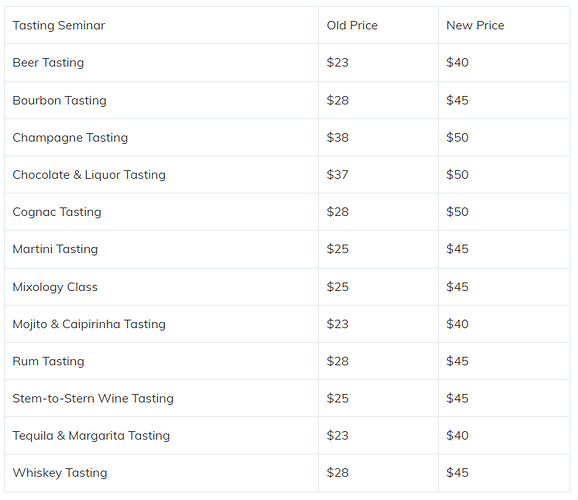 I can tell you that the champagne tasting was amazing

They do offer many higher shelf options for the tastings. The object is for you to want to order them by the glass or bottle later on. So they’re not gonna showcase the cheap stuff.

The wine tasting was not Barefoot. It was high end bottles of wine. They aren’t serving swill. We did Mixology and Wine tasting last year. We’ve booked both of those again plus the bourbon tasting. Even with the increases in prices I still think they will be worth it. I’m anxious to see what bourbons they serve as I live in Kentucky–the home of bourbon-- and in the city known as the Bourbon Capital of the World.

My hubby did the expensive Whiskey one and he was NOT impressed with the man’s knowledge. He said he spewed inaccurate information (my husband is a whiskey collector). There were some good choices but one of DH was really unhappy that the man had ruined this rare whiskey but adding apricots and something else to it and letting it sit. He told the man it tasted like orange fanta. LOL The man at the dining table next to us in our rotational dining was also a whiskey drinker and was chatting it up with hubby as he had done the regular whiskey tasting…it did not sound like that one had anything really worth going out of your way for. Hubby did find a fantastic Scotch flight for $60 that he said was a steal in the The Rose bar in the adult dining area.

I am working on becoming a first time DCL cruiser as well and have been contemplating the same types of questions…but when I look at your list with the price today vs. before, it just looks to me like the standard mark up on everything over the last year. eg Distilled water was 89 cents per gallon and now it is $1.39. Somewhere around 50% price increase seems standard

Thanks to everyone for your replies. I have tempered my expectations and cancelled some of the less interesting tastings but kept the other ones. The consensus seems to be that it is no longer a great deal like before but still a good deal.

My local liquor store didn’t increase prices by 50% even if water did so I’m not quite ready to become an inflation apologist just to line up Chapek’s pockets with my money.

My first cruise was last week, on the Dream. I considered the tequila and margarita tasting, but decided not to book it since I was worried about too much to drink in a short time, and not wanting to be tied to schedules. However, I found a bartender that I really enjoyed (respected his knowledge of his craft) and he mentioned he was leading that tasting the next day, so I signed up. We learned a lot and had some good drinks. I’m happy I did it, but it was very situation specific.

You say this was your first time cruising. How was your overall experience? DCL for life or willing to try others?

I would likely cruise other lines, in addition to more DCL cruises. I’m not sure who the other lines will be, but I’m open to others. I have an aunt and uncle that like cruising, but not DCL, so I could see joining them. And the friends I went with last week are DCL loyalists, plus I bought a bounce back, so I’m sure that will happen again

@jesstmu totally off subject but what movies were playing in the theater? We leave on the Fantasy October 8 and DS was wondering.

Unfortunately, I can’t help. We didn’t watch a single movie, or even consider it much. It was a 4 night cruise, so not nearly enough time to do it all