they are hoping to sell FEWER annual passes with this move

Well, maybe. As we all enjoy the magic of Disney so much, we like to forget it is a business. They are hoping to make more money with this move. If they are able to reduce the number of people in the parks in the process, that is great, but that is unlikely to be a motivator for them. Would they really sell those AP discounted rooms at rack rate if they aren’t booked at a discount? If yes, why did they offer the discount? They want to maximize profits above all else (most likely). This is not likely to be done with a steep reduction in people at the parks.

This is not likely to be done with a steep reduction in people at the parks.

I don’t see their goal at ALL being to reduce people in the parks, but merely to make sure that those booking rooms are generating as much revenue as possible (which are NOT, generally speaking, AP holders).

There may still be times when they want to draw in more people, and they can offer discounts to do so…but even now, the discounts offered to AP holders aren’t that much different from what the general public is offered. So they will still use discounts to fill rooms, with or without AP holders.

Now, if they start to experience the inability to fill up the resorts at busier times (unlike today) they will reverse this direction, no doubt.

So, the gamble becomes should I buy the tickets NOW through WDW and get today’s ticket prices (which works out to about $480/person), or wait and hope that when UT allows purchasing May 2020 tickets that the per person price is less than $480.

I’m struggling with this news too, and I’d like some Liner advice. I’m going in October and was planning to buy tickets a few weeks before FP+ day (in August). I’m waiting because medical issues could flare up that would result in a canceled trip.

But now I’m thinking I should go ahead and get tickets before prices go up 25%. So…

If UT only saves me $50, I might just go direct if Disney is more likely to give me a refund for medical reasons.

Does anyone have experience with refunds on tickets from Undercover Tourist? 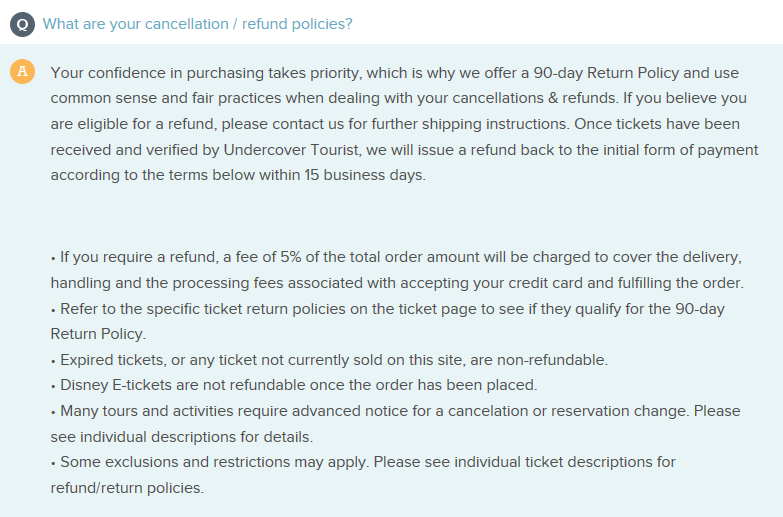 Likely, it’s a combination of both. The parks are busy most of the time now, and near capacity a lot more often, and they’re predicting SW:GE will push them to the limit. The amount of data Disney has on us is just mind-boggling. That’s why magic bands are free. They can probably profile who spends what right down to your home zip code.

generating as much revenue as possible (which are NOT, generally speaking, AP holders).

I don’t know if this is true. Sure, Florida AP holders are probably not huge revenue generators. But, I would assume a large contingent of Platinum Pass holders are out-of-staters who fly or drive long distances and make 3-5 trips a year. They probably generate a lot of revenue, because they’re staying onsite, eating disney food, and paying for extras like DAH, MNSSHP, etc. I’d even go out .on a limb and say this subset of AP holders are the greatest revenue generators.

Even the other Platinum Pass holder sub-contingent that buys it for the AP room discount and only goes once, maybe twice, a year are big revenue generators, because they’re buying an expensive AP and not maximizing its full value.

Disney will get all of us coming and going. Simply put, I think they are raising prices because they can.

They probably generate a lot of revenue, because they’re staying onsite, eating disney food, and paying for extras like DAH, MNSSHP, etc.

Over time, AP holders will generate LESS revenue, though, than single-stay guests. It is true that many will book resort rooms. But Disney would rather fill their rooms with guests who are going to spend more on food and merch, etc, than an AP holder who has generally maxed out in that category.

I’d even go out .on a limb and say this subset of AP holders are the greatest revenue generators.

Yep. And those AP holders will very likely not care if they have to spend a few hundred dollar more. That’s the win-win for Disney.

AP holders will generate LESS revenue, though, than single-stay guests.

Point taken; that is definitely true on a per-visit basis. But, having an AP incentivizes you to make return trips, each time spending yet another large sum of money. Disney is not going to fill their rooms with one-and-done families. They want repeat customers. Why otherwise have bounce-back offers, sell APs, give AP renewal discounts, sell TiW cards, etc. That repeat visitor, even if spending a little less on a per-visit basis, is more valuable over the long term than a once-in-a-lifetime visitor.

Not arguing with you, just trying to rationalize to myself why they would offer APs at all if it was not a financial win for Disney.

eta: I have yet to use the AP room discount, because I haven’t found it to be cheaper than MVT or other deals at the time, which are available to everyone.

just trying to rationalize to myself why they would offer APs at all if it was not a financial win for Disney.

I think, historically, everything you are saying is true. But I think RIGHT NOW, times are a bit different. Disney is flying high and filling up most of the resorts MOST of the time. They offer discounts the other times of year to draw people in, would be just as keen (more keen!) in drawing in a family that isn’t using AP.

I think it comes down to two TYPES of AP holders.

Those in the second category as also likely those with more disposable income who are still willing to pay the added cost as well as spend more in the parks.

But those in the first category are finding a way to spend LESS on tickets, which means also likely spending less on expenses during the trip. It is this first category that Disney wants to price out so that those same rooms are booked up by families making a single trip. This means that a room that might get a single AP to book two one-week stays will now get two one-week stays from families who will pay full price for tickets PLUS extra merch.

Now, that AP who books a THIRD week at a Disney resort starts to become a revenue loser because even with the extra food or events they might pay for, there is no new ticket revenue (which is PURE revenue) because the ticket cost was already paid. So, Disney now offsets that by raising the AP by $300!

Anyone a member of Sam’s Club? The price shows as yesterdays price for APs, just wondering if it’s true. I was going to call today to purchase ours. Talk about a day late

Good points. Either way, now I have to decide if it’s worth it to renew. I guess it depends on how much the regular ticket prices increase as well.

Anyone a member of Sam’s Club? The price shows as yesterdays price for APs,

So glad I started checking the Lines chat. Some are reporting they’ve paid the old price for APs.

Not arguing with you, just trying to rationalize to myself why they would offer APs at all if it was not a financial win for Disney.

I bet they eventually phase it out entirely. They don’t want people who come multiple times a year as much as they want people who come every five or ten years and stay two weeks. That is by far the most lucrative segment. And it’s the third category of AP holders- the ones who buy it to get the discounts because they know they’re going to spend a metric ton of money and the AP will pay for itself. They might keep it around for those people but the price will go up and that’s sure what it looks like they’re doing, to me. The next thing I’d expect to see is more blackout dates for the Gold Pass, especially for Florida residents.

How do you find this? I have a membership.

the third category of AP holders- the ones who buy it to get the discounts because they know they’re going to spend a metric ton of money and the AP will pay for itself.

This was me. BEFORE the price went up.

I’m honestly surprised they have the Florida resident pass, because that probably makes them no money. They’re probably mostly day guests who get free parking with the AP, then go home and eat dinner afterwards.

But, I still think there is a big contingent of North Easterners who buy the AP because they plan on going many times a year, but still drop $5-6k every time. It’s funny, I interact with dozens of people a day, and not a day goes by where I don’t have Liner-like discussions about Disney. There are a lot of crazy Disneyphiles with APs and you’d never know it. It’s only a 1.5 hr flight from here and it’s very easy to do long weekend trips. I have friends who go 2-3 times a year and stay at the deluxe resorts and eat 1-2 TS per day every time they go. I don’t think this is a small contingent either.

Just another view point, because Disney wants to keep incentivizing these people to come back.

The AP is probably a more predictable income though. I’d guess that they have a pretty good idea about how the APs are used and can probably forecast it pretty reliably. One off visitors are probably a crap shoot.

So with date-based tickets that are a part of packages, can you hold them to use later if you buy an AP through Sam’s? I have free dining next month. If I buy a Sam’s AP, is it possible to save those tickets for a later visit?

Ok, now I’ve seen somebody on Disboards say they talked to Disney twice today. Once they were told that the bridging to APs would be at the price of the AP when they purchased tickets. Then they were told it would it was up to the discretion of the CM at Guest Services. Any insight into that?