Any inside scoop on annual passes being offered again?

We are not Florida’s residents, and would like to buy annual passes. I spoke to WDW Customer Service about 6 weeks ago, and learned the passes are paused due to staff shortages, but that seems to be resolving. Anyone heard any details on when they might be back?

I don’t remember hearing anything officially about why AP sales were suspended, and I know CMs don’t have any more knowledge that all the multiple Disney b/volggers out there that watch and listen to everything Disney. The most likely answer is about profits: They will make more money on elogated stays forcing ppl to buy regualar tickets and there has been much speculation that AP holders and those that are FL residents do not make money for Disney b/c they don’t spend as much.

Last week AP sales were open for about an hour and then closed. Some error, but speculation is that they were testing to reopen sales again sooner than later. UPDATE: New Annual Pass Sales Already Halted by Walt Disney World - WDW News Today (wdwnt.com)

Staffing shortages are part of the problem, but not really the direct cause.

So, with the APR system in place, they have had to limit number of guests. Trouble was, too many guests with APs was causing the APRs allocated to APs to run out. As a result, too many guests who thought they should be able to visit most spontaneously with the APs was finding they had to plan quite far in advance. As a result, there were complaints (and, I think, a law suit…if I recall…but I might be wrong about that) that AP guests were unable to actually visit during time periods they should have been able to.

The result was Disney shutting down APs entirely.

How does staffing play into this? Well, staffing, ultimately, controls how many guests they allow on any given day for an APR. If they shift allocation of the limited APRs from regular guests or resort guests to APs, they ultimately are then shifting to guests who ultimately earn them less money from guests who, on a per visit basis, generate much more money.

I think them leaving the Florida resident AP is because a Florida resident who is much more local will be able to tolerate the limited APR availability. Further, they limited APRs that ARE offered for APs are only being offered to the pool of Florida residents, rather than ALL APs, so there are fewer numbers of people to contend with.

So, to answer your question…there is no official word if/when they plan to re-open sales. Some rumors/speculation has been that Disney really doesn’t want to offer APs any longer, and may eventually drop them. Other speculation figures that they will eventually return when staffing allows them to open up APRs more than they are able to at the moment…OR until revenge travel demand dies down enough that they start to have much more open APR availability.

The fact that Disney “accidentally” opened up AP sales for about 45 minutes a week ago suggests that Disney is “behind the scenes” possibly preparing to reopen sales. But, that might have simply been a gaff on the part of their IT, accidentally switching on the wrong switch, as it were, and it means nothing.

So…we have no idea if/when APs will resume at this point.

Thanks for this. I really appreciate the details and this insight.

As a result, there were complaints (and, I think, a law suit…if I recall…but I might be wrong about that)

the law suit is going on for California AP holders, no such thing is happening in FL

Ah. That’s right. I remembered a lawsuit was somehow at play!

It isn’t, but I heard that it was a huge contributing factor in the decision to halt AP sales.

I didn’t know about this!

Please page me next time this happens accidently or intentionally!

I believe the sale of APs was suspended at WDW before any CA lawsuit ensued. I could be wrong. CA res are much more organized and verbal about their Disney ‘rights’ than WDW AP holders are…

Staffing shortages are part of the problem

I think I agree with this statement because there is staff shortage everywhere.

However, my hairdresser’s son worked for DLR as a plaid for less than a year. He was promised a full time job. But, he never got full time status and he never had a regular schedule. Not having a regular schedule made it hard for him to get a second job to earn enough to live on. He did Instacart as his second job. Perhaps Disney doesn’t want to offer full time jobs because it doesn’t want to pay benefits! 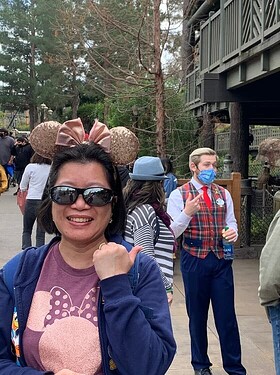 That is undoubtedly true!

They promised me full time too back 20+ years ago. They never gave it to me though because then I’d have medical, PTO, raises etc etc etc. They instead kept myself and most other hires as seasonal to get around all of the HR crap. They (before Amazon/Instacart/Postmates/Uber) never had any shortage of people banging down the gate for a job.

They just didn’t want to pay them for it.

My lead at the time told me it was cheaper to retrain new hires than retain already trained people.

I’m sorry to hear that such promises have never come true!

For every heartwarming story about CMs who have worked decades for Disney, there are probably 100 heartbreaking story likes yours and my hairdresser’s son.

What is it doing with all the money it has been earning by raising prices everywhere?

What is it doing with all the money it has been earning by raising prices everywhere?

Remember it’s all different divisions, so money made by one park isn’t shared by all unless you’re really high up the food chain.

But that aside, my guess is construction and bonuses for the C-Suite execs and board members. He cuts anything that’s in the red and saves “all this money” in operating costs. He looks like a genius while he chews through brand capital.

I love Disney. I’m not going back for a full year at least. Maybe more. I have DVC store credits I have to use in the next two years, but that’s it for us for a while. And quite honestly, we might just stay on Disney property to use the credits and skip the parks, opting for Universal instead. My last trip to WDW was so horrible, I don’t want to go back until Chapek is gone, and someone who understands the basic principals that got Disney all that brand capital to begin with.

don’t want to go back until Chapek is gone

His contract was just renewed for 3 years

WDW(something or another) had a great video this week where they talked about how they wouldn’t put it past Disney to renew (like they did) and then fire them before the contract is up, owing him full package.

They also brought up an AMAZING point. There was internal rumors of who his replacement might be, and that guy (and girl) was fired a few months ago…and with a scathing “not a good fit for Disney” comment from Chapek while they were at it. There were two videos that discussed it, I’ll try to post them here.

Ok, I can’t find the stupid videos so I need a little help.

The Disney food guy that had all the great snack maps that passed away earlier this year/late last year.

He used to go on and banter with the fun Hawaiian shirt guy who sits behind a desk and doesn’t sugar coat things or kiss Disney’s butt.

I will probably buy myself an AP if they go on sale again. It probably won’t be worth it since I’m only going once for 8 days in the next year, but I will be buying enough food and merch that I might make up the difference in cost with discounts on my next trip. And you never know how long the window will be open to buy, if they ever reopen it.

Damn, they got me with their false sense of scarcity.