I’ve seen some attractive photos since I started following a bunch of #wdwliners on Instagram and heard a few folks talk about carrying their digital SLRs around the parks, so I suspect there are some folks around here who take photography in the parks somewhat seriously. I’ve been using my Disney World trips to try to improve my photography in recent years and am always looking to expand the network of people who I can learn from (and willing to share what I’ve learned thus far).

Along those lines, does anyone else share their photos on Flickr? I’ve found a bunch of people who do great work in the Disney parks that I follow over there, but since “there’s always room for one more” I’d like to see what folks from here might be sharing. You can see my photos at: https://www.flickr.com/photos/rowanb73/

Are there other sites that you’ve found useful for your Disney (or other) photography? I’ve look at the Disney Photography Blog (http://www.disneyphotographyblog.com/), where I’ve gotten some good processing tips and a great guide to getting started with fireworks photos. I’ve also listened to the iso5571 podcast (http://www.iso5571.com/), where guests have offered interesting perspectives on a variety of photography-related topics (and the hosts sometimes get around to doing the same).

In this guide, we’ll offer viewing tips for Fantasmic at Disneyland and Walt Disney World, insight into the dining packages that offer reserved seating for the show, and suggestions for taking better photos of this impressive Disney nighttime...

This guide offers camera recommendations for everyone from beginners to pros, plus lots of tips for taking photos at Disney and beyond. Learn photography by reading this guide! Share This! Ever left Mickey’s Not So Scary Halloween Party with some ghoulishly bad photos? Blame ghosts. Or evil-doers. Or

I haven’t been on Fickr in years. I probably should go back.

Yes, his lens reviews (found if you scroll down the page on the second link you posted) have been particularly useful. Two of my favorite lenses are a result of his recommendations.

I’ve been narrowing down what I want for a second e-mount lens. I’ve been using his list.

I also used his tips for Fantasmic! as best I could with the old point&shoot and they came out pretty well. I’m really looking forward to getting in to these as soon as summer break comes along. Imma be a photo phool all summer!

you can see a lot of my photography at www.bswan26.blogspot.com and www.bswan26dl.blogspot.com. both are better viewed on a PC than a mobile device. For the DLR blog, select the “slidebar” option and read the posts in order. Not sure how many photos in the WDW blog, but the DLR one has over 900…

I took a quick glance at one of your Disney World trip reports @bswan26 (January 2012), and saw some good shots of Epcot entertainment and was impressed the you have some useful shots from inside Ellen’s Energy Adventure. I also saw that you turned Spaceship Earth into a giant Touring Plans billboard! I’ll have to go back and look in more detail later.

Great pics! Love the illuminations shots, the ones with the tori gates in particular. China hiding full moon is another one of my favorites. Thanks for sharing.

Thanks, @J_ClaytonIII . The Japan pavilion is a great place to photograph Illuminations, since you’re elevated above the crowd. It’s hard to come up with anything new from there, since there are already a lot of great photos people have taken, but it’s among my favorite locations to watch the show, so I’m always happy to try to capture the show from there.

Wow. Both of you…just wow!

I’m thinking of renting a lens for our May trip to WDW & PCB. I would really like to shoot more wide angle on this trip, and the widest I currently have is my 35mm prime. I shoot Nikon, am thinking of renting the 16-85mm or the 18-200mm. I’m leaning towards the 18-200 just so I won’t have to take the lens off the body the entire trip. But am wondering if I’ll lose a bit of that fun fish-eye bend from not being able to go all the way to 16? Anyone have any experience with either of these lenses (or similar if you shoot Canon)?

I’ve used Canon equipment for as long as I’ve had a digital camera, but regarding focal length, I have an 18-200mm f 3-5-5.6 lens that is on the camera most of the time. It’s very versatile, which is why it’s my default lens, but if you’re looking for distortion, then I don’t think that’s the answer (though, I don’t have a full frame camera, so I am losing a little bit of what the lens sees).

I do carry a Rokinon 8mm lens that I like a lot more than I thought I would. It’s a pretty good value (I got mine for $230 + tax) that Tom Bricker recommended. I bought it thinking I’d use it once in a while when I got stuck close to the castle for fireworks or a scenario when I was forced to shoot really wide. However, I found there were times when I actually liked the distortion and the roundedness you get using the lens. It worked really well a couple times when I photographed dances. I also got a couple shots at the end of my last day in Epcot in March that I liked (I’ll post links to those below). 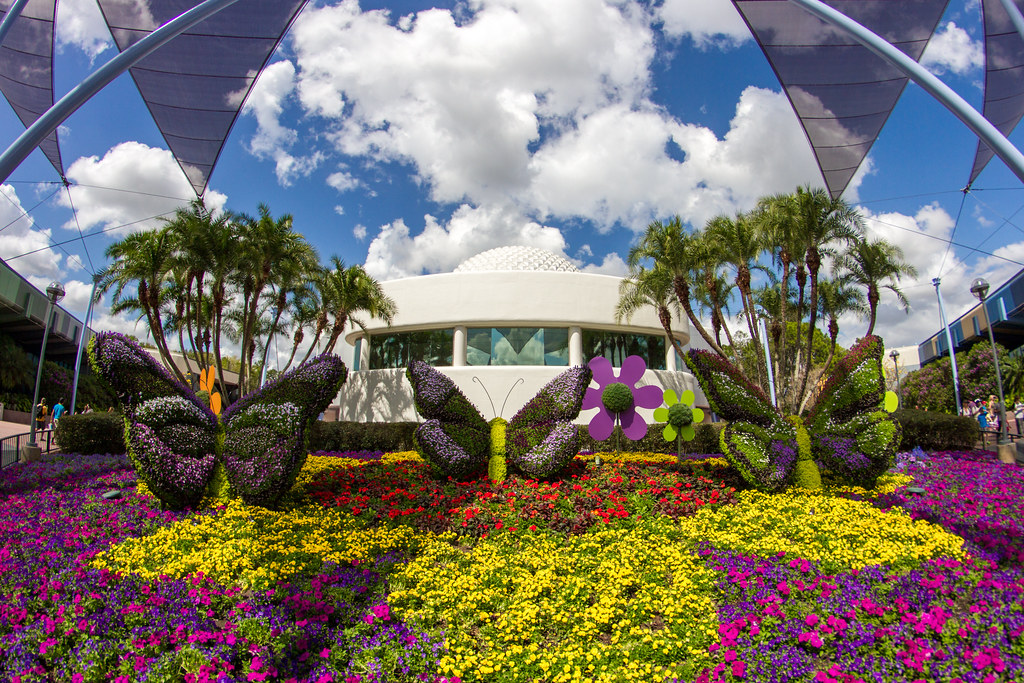 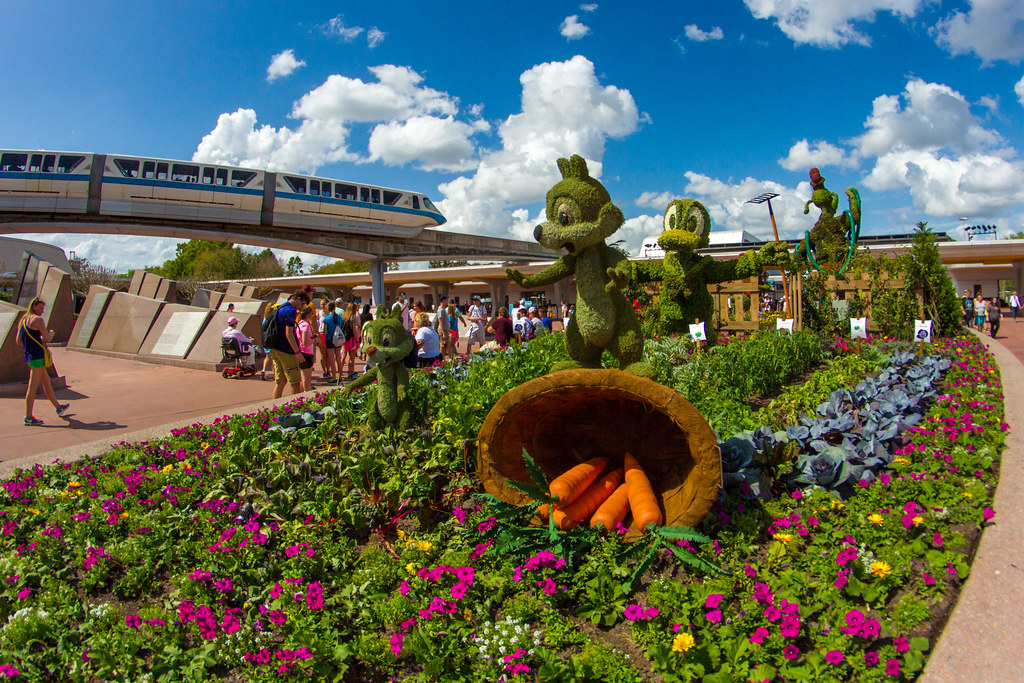 I love those @FlyerFan1973, that is what I’m looking for. I never shoot wide, I’m primarily a portrait photographer and stick with my 85mm most of the time. I might have to rent the Nikkor 10.5mm, although for $250 that Rokinon is really affordable!

And love all your work @FlyerFan1973 – just went through your Flikr postings. Very nice!

I also use a Nikon. I own the 18-200 lens, and it’s the one I use for 95% of all my shooting, and 100% of my WDW shooting. Past experience with 16mm is more distortion along the edges than I want. I also hate to have to carry extra lenses around the park and have to keep switching. If I want a panorama, I shoot multiple shots and stich them together in Photoshop.

Thanks @bswan26. I really want to rent the 18-200 for our next trip, but I want a fisheye too! Might have to put a few hundred more into the budget for lens rental!

@YouAreAllWeirdos, One thing I should mention about the fisheye is it takes some getting used to just how close to have to get to things. The lens “sees” so more in the periphery than I do, so plan to experiment a lot. The Rokinon lens that I mentioned is also fully manual. It doesn’t autofocus or automatically adjust aperture. Fortunately, from a practical standpoint that doesn’t matter, because I have always set the focus to infinity (I think you’d have to physically join with another object to get close enough to have to adjust the focus), but it’s still worth noting. The camera’s light meter will still help you adjust the shutter speed that is appropriate for the manual settings on the lens, but you have to do that yourself.

That is one thing that would make me nervous, I’ve never had a lens that didn’t autofocus. But when I read up on it it doesn’t sound super difficult. We’re hitting the beach before WDW, I’m sure I could get plenty of practice there too. I’m pretty good at adjusting for exposure, I’m finally to the point where I can just look around and make a few adjustments quickly on the camera and nail the exposure without even thinking.

My biggest concern with trying all this out will be trying to balance 3DDs, DH, the touring plan, and my photography desires all at once!

@YouAreAllWeirdos- I have a fisheye + macro adapter ring that attaches to my 18-55 kit lens. Obviously a dedicated lens can produce better images, but I like the convenience of just carrying the adapter (lighter). And it helps that it was less than $20 (in case I lose it or drop it)…

[quote=“YouAreAllWeirdos, post:17, topic:11726”]
That is one thing that would make me nervous, I’ve never had a lens that didn’t autofocus[/quote]
Since you’re always focusing at infinity, the only thing I’ve had to do is “train” my fingers to make sure the focus ring is turned all the way to one side.

As for how to balance photography and the rest of the demands of a vacation, that’s always a balancing act and is a big reason I’m happy to have taken a solo trip in March.