We were DD21’s uber (or as DH says Goober) again last night. Dropped her off at the cast bus stop just before 3:00. We had a 5:00 reservation at Grand Floridian Café. Pulled up to the guard house just after 3:00, said we have dining reservation and gave last name. He looked it up and asked for ID then sent us through. We just wandered around the resort, hubby has never been there and I have only really been inside the main building. Weather was great for wandering. I decided to take some pictures of my views as we made a few stops to just take in the scenery. 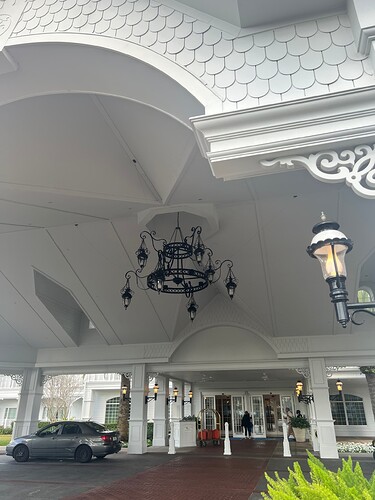 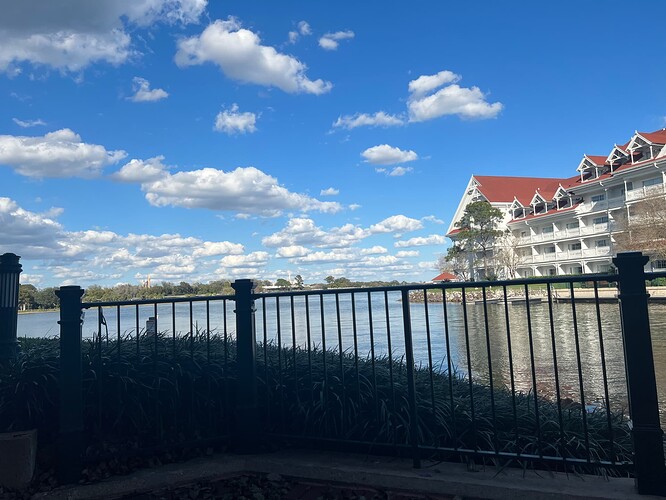 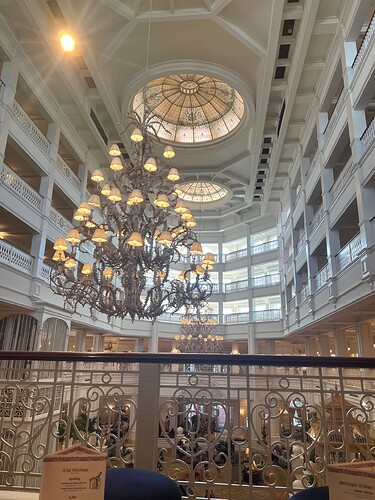 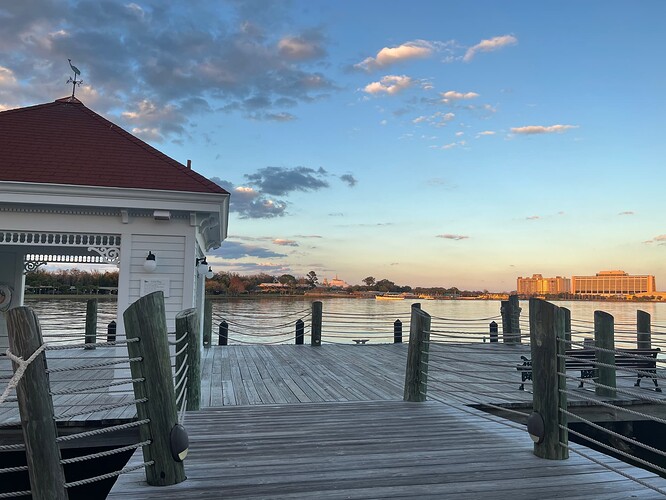 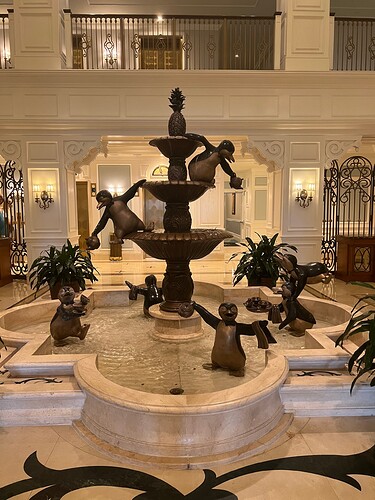 The GF seems so busy. Not sure if it’s because we were there near check in time or if it’s just always that way. We did enjoy the piano player a bit, he played Rainbow Connection and if you’ve read other reports of mine you know that’s one of my favorite songs. I managed not to cry.

Also found a couple of the chocolate sculptures and wow that cheetah!! 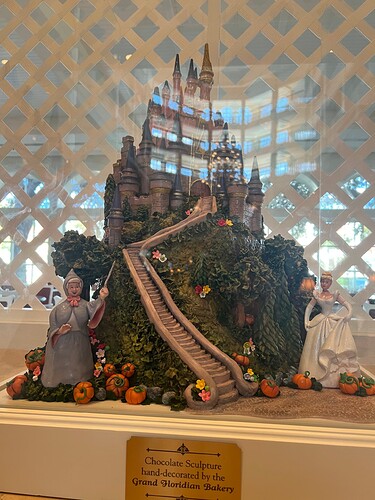 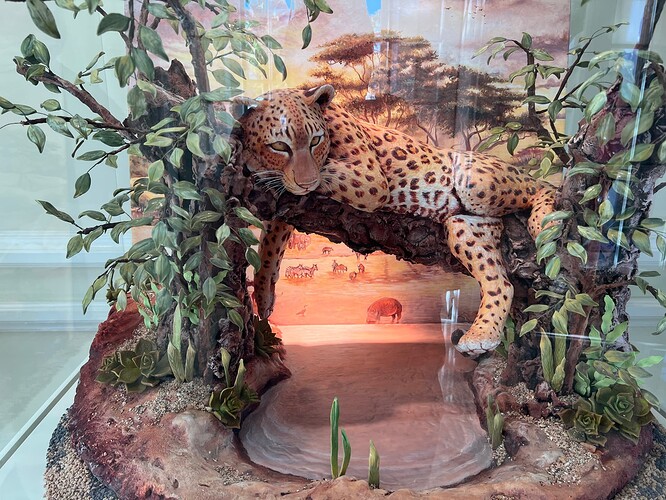 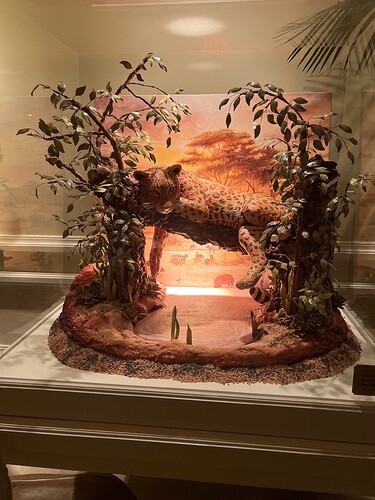 Checked in for our reservation and hit the restroom. I could hear a mom and a couple littles in another stall. Kids were talking and singing and pretty loud. Poor mom kept trying to get them to bring it down a notch, I’ve been there and just smiled that I’m not anymore but in an empathetic way. Came out and were sitting outside waiting for table. Kids came out and it was dads turn to follow them around and stop them from destroying the place. Several minutes later mom comes out and just looks frazzled! Looks at dad and with a big sigh says “our room is ready” LOL oh the timing, The kids had wet hair so I’m pretty sure they had been at the pool and mom was forced to change them in the bathroom stall. Again, I’ve been there and am so thankful I’m done with those days.

Got the table ready text and were the first to be seated for dinner. We both had the lobster burger (Hubs opted for no bun and vegies instead of fries and was so happy the server didn’t even bat an eye at this request) It was delicious! I also had the Walk the Plank to drink, it reminded me of something but I can’t place what. Anyone have thoughts? 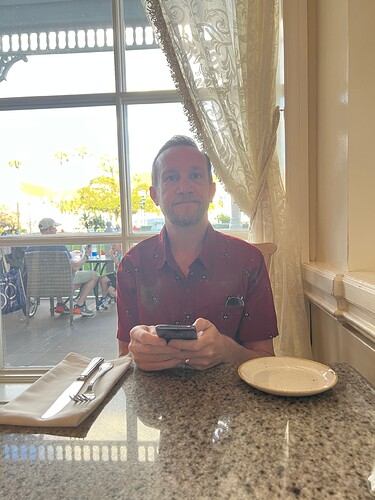 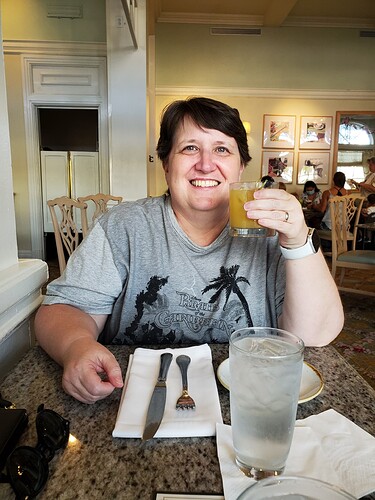 Decided to boat to MK and it was the best decision ever! The sunset was beautiful and again weather was perfect! 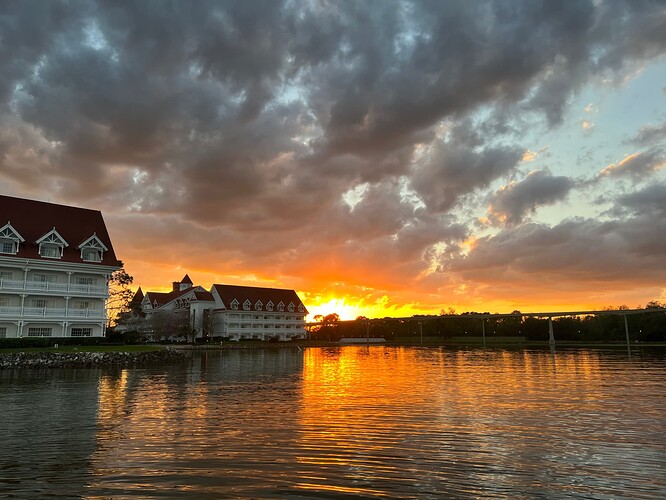 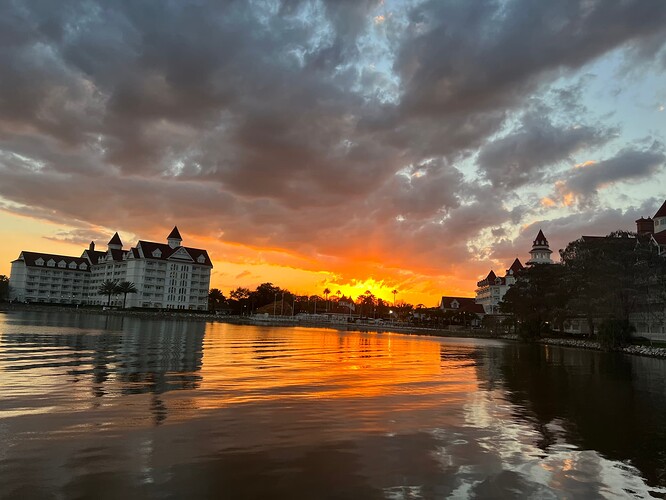 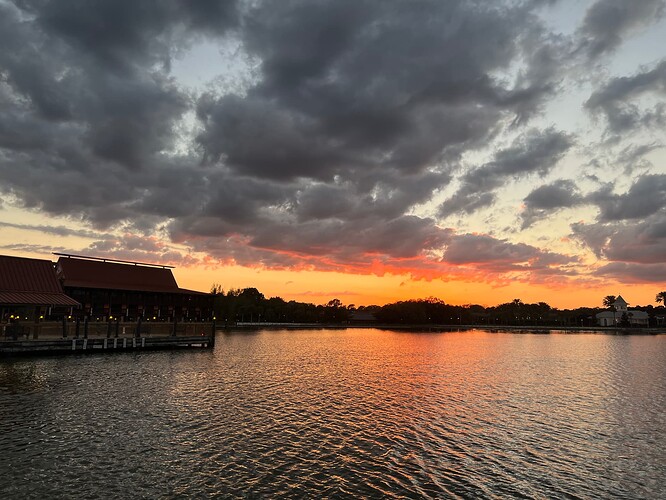 Tapped in to MK and went on the hunt for a postcard to send a Disney loving friend for her birthday. Found some great retro ones in the Vault and now I also know how and where to buy postage, get the Main Street stamp and mail things in MK!!

My big plan for tonight was to finally watch Enchantment from Main Street, towards the back so we could get out quick to pick up DD. After mail journey we walked by DD’s fireworks post, her favorite spot is the path that goes by the wishing well. She is posted by the Merida M&G across from Cosmic Ray’s. She was there so we said hi and talked for a bit. HM had a 40minute wait posted on MDE so we headed that way. Entrance was posted 30 so we went for it, actual was 8 (I think). Ride stopped just after we loaded but was only a short delay. Exited around 7:50 and had to decide if we try to make it to Main Street or not. So something about me that you might not know is whenever anyone asks me where the best place to watch fireworks is my reply is ALWAYS Big Thunder Mountain! MDE had a 20minute wait so we headed that way instead! It was about 16minute wait and it was so worth it! It really is my most favorite thing!!! Someday I’ll see Enchantment from Main Street

Headed out of the park with the masses but got to take the backstage behind Mainstreet on the Casey’s side for the first time so that was cool. We weren’t really paying attention to signs at exit because our plan was to take the walkway to GF because we haven’t checked it out yet. Just before the exit I realize they are sending everyone in the right side exit straight into the Monorail line so we zag over to the left. Stroll down to the resort launches and a boat was just leaving and only about 6 people in line so we could have been on a boat pretty quick but wanted to check out the path. It was a nice walk with very few people around. If I had been in the parks all day it would feel like a super long journey but it was nice for our quick visit.

Back in our car and as we are pulling out of GF around 9:00 DD texts that there was a fire backstage and busses weren’t running to cast parking lot. We were able to drive around and get in from our side and only ended up waiting for about 20 minutes.

Another great visit, I just love being a local!

I might be trying my first solo trip tomorrow! DD is going to EP with a bunch of friends and I might be her driver if she wants to drink around the world! If so I will do a live trip report if anyone has requests for photos or even wants to meet up! I will be in MK in the afternoon (she still has class in the morning) and maybe I will even watch Enchantment from Main Street!!

So much fun! I would love to be a local.

Kids were talking and singing and pretty loud. Poor mom kept trying to get them to bring it down a notch,

Thanks for this memory prompt!

15 years ago we seemed to be constantly toning down the sound level on the 2 yo with us.

I was on a solo bathroom break when, in the next stall, a toddler was babbling fairly loudly - mom getting nowhere with shhhh!!!
(Echos are too much fun) I was chuckling at our not being the only ones.

When I heard the mom speaking French, I really cracked up.

The sunset photos are gorgeous!!