Annual Pass update (not for sale yet)

Was looking(stalking) the pass site trying to will them to go back on sale for expired/new passes. Saw this new wording, sorry if it was already posted somewhere else first.

That would be nice to be able to hop before 2!

I can see them using it to funnel guests during the expected crowds of this coming anniversary and holiday season.

“MK’s at capacity, but here, you can hop to Epcot to try Rat at noon today”

I had misread it at first, thinking they were saying that not only did they want to know the first park, but then they wanted the park we’re hopping to to be added as well…luckily it was just my misreading it.

I wonder if this would just be for APs. Surely not?

I don’t see what’s new in that.

Right from the start in January they said that park hopping might be available earlier or later than 2pm.

They also said the park reservation system was subject to change.

If this has been added to the AP pages then perhaps that’s what you meant by new, but the information itself isn’t new.

Correct me if I am wrong @Bubblez, but I think she posted on here b/c she read it incorrectly and thought it was now necessary to have a second reservation to hop.

I thought it was for the bolded section.

Ah yes it is possible.

It was for both, I had thought they had added the need to identify the park being hopped to. But also the wording for the ability to hop before two.

With all of the talk about crowd management with G+, I just thought allowing hopping before 2 could herd crowds away from MK during the anniversary and Christmas week.

This morning, I also was reading an article from the Disneyland local OC Register saying that the wording for the Magic Key passes also alludes to them using “weather, ride closures, special events etc.” to modify park capacity/Magic Key PH access.

That’s a secret that likely will never be revealed. Details about Magic Key reservation capacity levels will be locked in a black box that has only one key held by Disneyland’s crowd control managers.

What can cause Disneyland to limit Magic Key capacity levels?

Theme park capacity may be limited “from time to time” due to weather, seasonal considerations and special events, according to the Magic Key website.

That means Disneyland can limit Magic Key capacity if it’s raining or forecast to rain — or even if it’s windy, cloudy or sunny. Special events like the Disney California Adventure Food & Wine Festival, Oogie Boogie Bash and other festivities tied to Lunar New Year, Halloween and Christmas could trigger Magic Key capacity limits.

The rehabilitation or refurbishment of attractions, restaurants and any entertainment offerings can impact Magic Key capacity limits. That means keyholders may find fewer reservations available when a ride goes down for a seasonal rehab, until nighttime spectaculars return and while live shows and parades remain on hiatus." 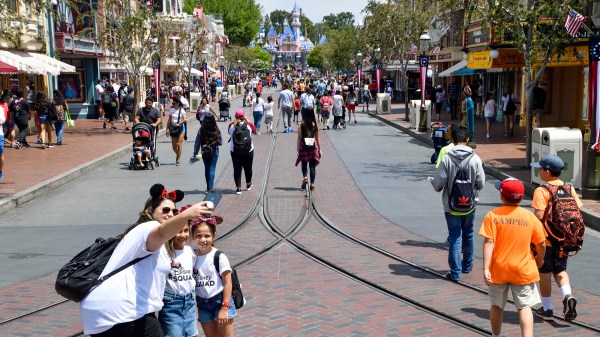 How will Disneyland determine reservation capacity limits for Magic Key...

Details about Magic Key reservation capacity levels will be locked in a black box that has only one key held by Disneyland’s crowd control managers.

My biggest problem was that I would go for a week or two, my big yearly trip, and I would have a hard time navigating the crowds.

The lines were too long and all the tables would be taken by people bringing their lunches from home or kids doing schoolwork until their parents came and picked them up after work. I was spending thousands of dollars for long waits and the privilege of eating on the floor next to an outdoor planter.

I would say in surveys that I could have just taken that money to WDW where at least I had 3 other park options to go to on crowded days.

IMO this is their way of restricting access to people who weren’t spending money in the actual parks themselves.