Has anyone here tried using Kenny the Pirate’s Animal Kingdom for Families with Little Children touring plan? It seems to be almost exactly what we want to do with our little ones who will be 3 and 6 when we go in October. But, when I try to plug it into the touring plan software here it isn’t matching up with the times and isn’t showing we can get it all in. It also doesn’t seem to me that there would be enough time between finishing Pangani Forest Trail at 9:45am and getting to Meet Disney Pals at Adventurer’s Outpost between 11:15am and 12:15pm with 4 meet and greets, Triceratops Spin, and the Boneyard all in between. Just wondering if anyone had any experience with this plan or something similar?

Most of the KTP plans anticipate park opening at 8 am. Most park openings in October will be 9 am. Is that the source of the discrepancy?
Easier for people to weigh in if you publish your TP version of the plan then include the link here and/or include a link to the KtP plan.

The plan shows a 9am start. Here is the KtP plan: 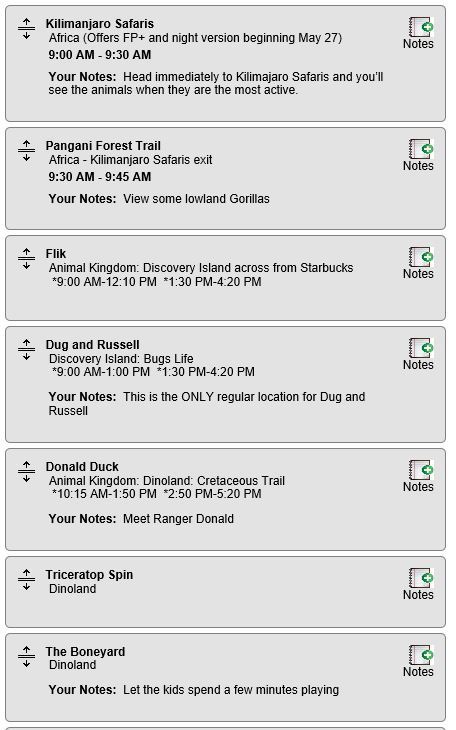 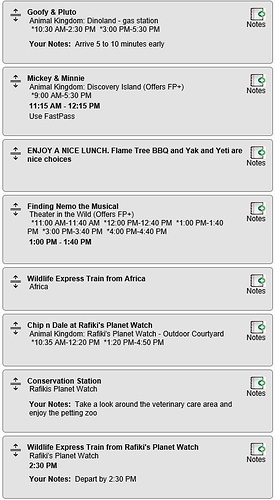 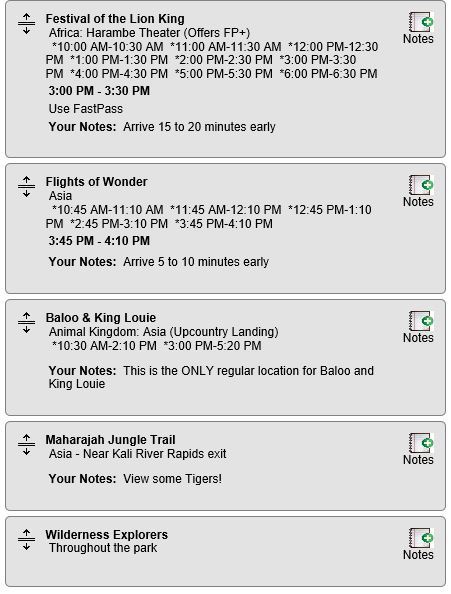 Agreed it looks like a lot of stuff. Do you have the plan of what TP comes up with when you input steps in that order? (Although less predictable because character meets not included.) (FWIW, we waited 30 minutes for Baloo and Louie last month on a CL 6 days.)

Here is the link to the TP plan:

I only put in 20 minutes for the meet and greets and it still doesn’t work. Instead of a 3pm FotLK show it is showing 5pm, it shows us getting to the Nemo show 15 minutes late, and Flights of Wonder after all the shows are already over.

Keep in mind too that KtP and Touring plans are estimating what they think the wait times will be. I have no idea what Kenny uses for his but I know touring plans uses actual wait times from the past several years. Of course with crowds being considerably higher this last year or two it’s all a guessing game lol. There is a lot of guesswork as well as to what will interest your kids the most. Some kids love the trails and will want to stay and watch the animals so 15 minutes may not be long enough. If you plan to have them do Wilderness Explorers that can use up a lot of time throughout the day as well. Plans are good to keep your family from standing around walking about where to go but you have to be ready to deviate or eliminate things as delays come up.

I would work from the more conservative plan and have ideas in your mind for what you’d add if you find yourself ahead of schedule. But I have to say that we were not going at a fast pace with our kids. The time I set aside just for “wandering” was hugely helpful.

Oh, I definitely agree. Plans are good but just a guideline. I was just curious if anyone had any experience with this particular one because it seemed to hit everything we want to do but didn’t seem realistically doable to me. And you are absolutely right about not knowing what will hold the kids’ attention! LOL Thanks for the feedback.

I think a big part of the problem with KtP plan starts with the 1st 2 items. There is almost no way to get to Kilamanjaro get loaded and actually see the attraction in 30 mins. then you have only 15 minutes to get from Kilamanjaro to Pangani then you have to walk through and see all the animals. I have no doubt you can walk through Pangani that fast but that wont leave any time to actually look at the animals or read any of the interesting information about them.
My guess is that KtP plan would have you at least 15 minutes “behind” after the 1st hour.

I hate to say it, but here it is: There’s too much stuff in your plan. I suspect that most kids aged 3 and 6 would be overwhelmed, overtired, and ready to crash long before running out of steps in that plan. There are also no breaks built in for snacks, bathroom, playing the drums, watching sidewalk performers, etc.
If i was to make a couple of (gently intended) suggestions, they would be:

Thanks, I think that makes a lot of sense.

I was actually talking to my husband about this this weekend and said most of the same things you just said! We will probably drop a show and skip the meet and greets that we can do elsewhere. I would like to skip doing the train to Rafiki’s Planet Watch altogether…we did it last time and it was pretty boring. The only thing of any interest was Rafiki and my son wants to see him again this time. I don’t think there is anywhere else to see him. But, I may have to find a way to distract him from that one and save a good chunk of time! LOL As for the trails, is there one that you think is any better than the other? As I was saying to my husband, we have been to lots of zoos and just walking through and looking at animals isn’t something that is really special or unique to Disney. The giant bats did sound cool, though. And I definitely agree on the boneyard. They will probably need closer to an hour in reality to have plenty of time to enjoy it. I have read that it gets really hot in the afternoon so I was trying to get in done in the morning. When you did it, was it in the morning or afternoon? Thanks so much for all your help!

Yup, definitely going to need an overhaul on the plan! LOL If it sounds too good to be true… I am going to go back through and trim out several things and see where I am at.

We invariably end up in the boneyard for 2 hours from 1-3 pm during which I roast and wish I was dead and my kids sprint around like desert gazelles. I would suggest not doing this. You’re right, I imagine morning would be awesome for Boneyard, I think it opens at 10 am. Also, there was a photopass photographer at the mammoth excavation site last September and we got some amazing photos digging in the sand.
Maybe if you gave your son a choice that you’d be interested/willing to follow through on: “We have time to take the train to go meet Rafiki OR watch the Lion King show” or equivalent? (Unfortunately, my kids get so fixated that bargain may not work and they may choose Rafiki at all costs.)

And just a note of encouragement - don’t worry about not doing enough, everything that you get to do with them will be magical. I guarantee that they won’t complain that they didn’t do enough when you get home. They’ll spend the next several months talking about the stuff that they did and saw!

Oh, The Boneyard… last time (October 2014) we were there right at 10am. It was comfortable weather-wise and WONDERFUL to spend some quiet time. I think the kids played in the sand for a couple of hours, and it was the most relaxing part of our trip. There were surprisingly few kids there, and a CM or two to help build castles, etc.

A sandbox at Disney beats out any sandbox, anywhere.