Am I the only one asking this question?

Ever since GOTG opened I’ve been asking this question.

Why did Disney install permanent tap points in the stand by lane? 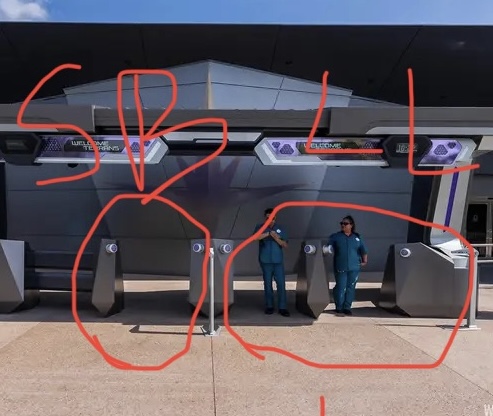 (this is not my photo, I borrowed it from the intertnet)

I had a shower moment this morning and have two thoughts.

1.The indoor queue is pretty small. Especially compared to ROTR. The outdoor portion of the queue is very temporary. So maybe they plan on keeping BG’s for longer than they are really needed to keep the line contained inside the building.

2.Could there be some sort of MB+ element in the ride or queue? This would be really cool and I think there are a lot of spots in the queue that they could do some fun stuff with.

Anyone else have any thoughts? Am I the only one that finds this odd/interesting?

Seems excessive, but maybe for any extended hours (such as extended evening for deluxe?)

Yeah that could be another reason.

I don’t know why I need to know so bad why they did this!

It is probably easier for them to have it and not need it than to not have it when they find they DO need it.

I assume it is used for the VQ right now. As @OBNurseNH said, could be used for Extended Evening hours…or future other events such as After Hours. (Although…has there ever been an AH at EP?)

It’s a departure from the norm so it catches our eye and makes us wonder.

It is probably easier for them to have it and not need it than to not have it when they find they DO need it.

Yeah this is the most simple reason but why not add it to Remy? Or maybe they did but I’ve just never noticed it? And they didn’t use it for VQ.

I assume it is used for the VQ right now.

Maybe there is something planned with the new version of the Magic Bands?

Yeah that is one of my thoughts. I think there are spots in the queue that they could do some fun stuff with.

Yeah this is the most simple reason but why not add it to Remy? Or maybe they did but I’ve just never noticed it? And they didn’t use it for VQ.

I tried to find pictures of the Remy entrance. I can’t tell…but it appears there COULD be tapstyles at all three entrance points…but hard to say, since every picture I see has employees scanning with a handheld rather than using a permanent tapstyle. The photos do show circles about the right size to be a tapstyle as part of those red booths at the entrance…but they might just be decor.

Yeah I haven’t been on Remy in a few months. Might need to do that my next EP day. But rode several times while it had VQ and it was always a CM with a device that checked us in.

Yeah…but the photos show the CM using a handheld for the LL as well!

Ahh so maybe none of the taps were used but it does have them in both lanes. Maybe it’s just something they are adding to every new ride?

There’s definitely taps at the Remy Standby line. It’s how I checked in for the VQ.

Really? I was always checked in by CM with device! Okay so maybe it isn’t a one off then and just something they are doing with new rides. I wonder if they will add to older rides when they go down for longer refurbs?

yup, I distinctly remember one under or around the phone in the booth and one on the other side of the door because I wanted to take a look at the booth cause it looked like ti was “attached” to the phone somehow and I’m a sucker for theming and wanted to see what they did.

But the line worked out that I only got the far side one. I was sad.

Here is a picture…I circled what I THINK is the Tapstyle. Is this what you used? 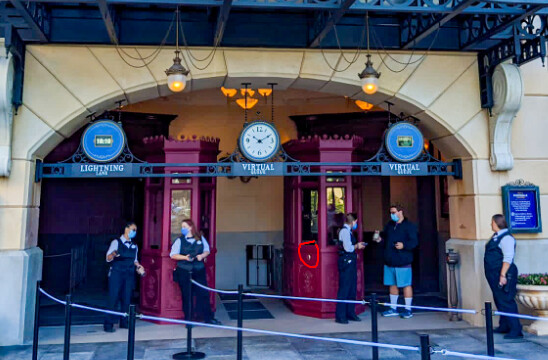 I was in the line where the guy in shorts is. You can see the Tap next to him. That’s the one I got stuck using. The girl is standing in front of a tap though. You can juuuuust make it out at about waist high.

Wait, maybe i’m not mistaken. Is that middle-area an actual line? I thought it went no where.

And there is the other one! 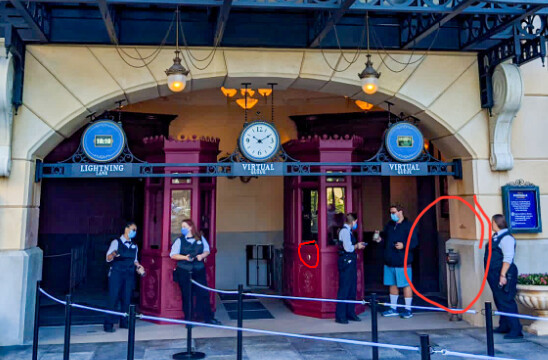 Yep so I guess part of my question is answered. GOTG isn’t the first ride to have these permanent taps in SB. Still hopeful the reason is something cool like MB+ fun!