We are devoting a day to AK with a 12:55 reservation at Sanaa. How can I work a decent break in without going all he way back to our resort (FWC)? It will be myself, DH, DS10, and DD8. This is our first trip if that matters…

Depending on when you want your break, there are a couple of options that come to mind.
If you want to extend your mid-day break, after lunch at Sanaa, you can take the bus over to the main lodge and spend some time in the shade on the observation deck, and/or wander the lobby area and just take a break on one of the couches there.
If you are looking to break later in AK, there are lots of places where you can sit in the shade and have a snack or just something to drink (or a Mickey Bar

). Also, the train ride to Conservation Station and the exhibits there can be a break from the high energy of the rest of the park; if your kiddos are into the Wilderness Explorers badges, there are several stations there that people seemed to be enjoying.
I’m sure other folks will chime in with other ideas.

I was going to suggest low-keying it at the lodge after your lunch. It’s kind of darkish in the lobby and there are a whole bunch of couches. Victoria Falls lounge is right there, too, for a cold libation. There are also some covered porches off the hallways overlooking the Savanna that have porch rockers. IME they are rarely occupied and quite peaceful 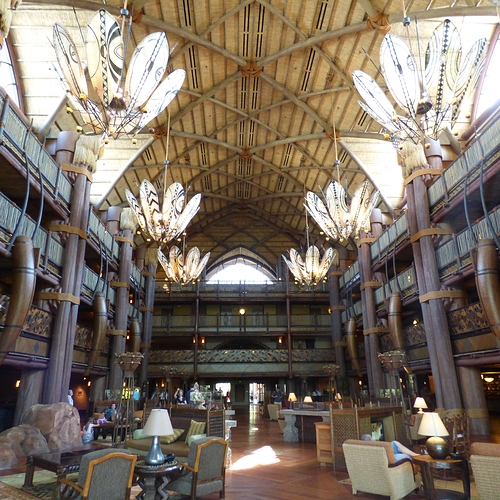 Or outside in the shade by the pool.

Factor maybe an hour for lunch. Ideal is if you get one of the first reservations and show up EARLY. Then, you’d request (and have a better shot) at a window seat. Any extra time can be used checking out the animals at the nearby Savannah.

Get the bread service and all the associated sauces for a minor additional charge. You can thank me later.

Allow for time to explore the Jambo House which is the main building at AKL and is a short (5min?) drive from Kidani.

Get zebra domes at Mara which is the counter service in the Jambo House. Check out the many Savannahs at Jambo.

Allow another 30ish min to get back inside the park from the lodge.

We’re talking hours for the above. Decent enough a break for y’all?

I prefer to hit Sanaa on the way to the Animal Kingdom…usually after hoping from some other park.

Oh, so that’s what it looks like without a giant Christmas tree…

Thank you for all the feedback

I have not been to WDW since I was 13 ( '88) so this helps me tremendously. It sounds like there’s plenty of chill out space at AKL.
I will plan on our break from 12:15 - 4:00 which should allow for travel time, eating, and chilling. When we return to AK we hope to hit up EE and KRR at least one more time each and then KS around 7:00.
I wonder if it will be worth staying late as hours will extend until 11 pm when we are there in Aug?
Thanks again for the help!

I’m contemplating something similar for AK. Our Sanaa ADR is 2:30ish, so my current plan is seeing all our must do’s before lunch and then playing the rest of the day by ear. I’m hoping Sanaa will feel like a break and then we’ll go back into AK to see the tree of life, play at the boneyard, and hopefully see JB/RoL. My youngest will only be 5, so we will take the buggy that day and she should nap or rest as we walk around. If the weather is miserable my back up plan is visiting AKL after lunch or just skipping the rest of AK and heading back to the hotel.

I doubt you’ll need that much time for the AK but you could always decide to head back early if you wish.

A better plan for us would be to sleep-in that day, get the first seating at Sanaa for lunch, and then head to the park w/ good, preselected FPPs. You could still easily do everything the Animal Kingdom has to offer and be better rested for a later night with all the new nighttime stuff this way. Plus, the park will be cooler later and therefore more pleasant; AK gets HOT.

The Animal Kindgdom is Disney’s biggest theme park (including even the international parks), so you’ll be doing lots of waking. I wouldn’t be surprised if you walked more than 10-12 miles. Depending on how you guys tour, it would be easy to burn all your energy for ensuing days and end up being crabby zombies.

Building in long breaks (naps are ideal) and/or rest days and/or sleeping-in a bit some days, etc is key for our enjoyment of WDW.

I like the idea of this and I even have a 11:30am Sanaa ADR too, but I can hardly fit anything in. This is our first time and only day at AK, we also want to leave by 8pm if possible and either FP or get a DP for RoL/JB.